"50 countries led by Britain, the Soviet Union, and the US, including Canada, met in San Francisco to created the United Nations (UN). The UN had four goals: keeping world peace and preventing new wars; encouraging co-operation among nations; defending human rights and helping to promote equality; and improving the standard of living for all nations" (Falk 117). The structure of the UN includes the General Assembly, the Security Council, the Secretariat, and the International Court of Justice.

In September 1945, a Russian man named Igor Gouzenko walked into the newsroom of the Ottawa Citizen and announced he had proof of a Soviet spy ring operating in Canada. "The Gouzenko Affair marked the beginning of the Cold War in Canada. It had now hit home that there was potentially a communist threat in Canada" (Falk 121).

Definition: "The political and economic doctrine that aims to replace private property and a profit-based economy with public ownership and communal control of at least the major means of production (e.g., mines, mills, and factories) and the natural resources of a society. Communism is thus a form of socialism—a higher and more advanced form, according to its advocates" (Britannica).
The term cold war itself, made popular in a 1946 speech by Prime Minister Winston Churchill of Britain, describes the ideological fight between democracy and Communism that began shortly after the end of World War II and lasted until 1991. For the foreign policy of the United States, the cold war defined the last half of the twentieth century. It was a war of ideas, of threats, and of actual fighting in the countries of Korea and Vietnam, pitting western nations against the Soviet Union and China and their Communist allies. The 1940s and 1950s saw the cold war bloom into a period of incomparable suspicion, hostility, and persecution. Anti-Communist hysteria ran through each branch of government as the pursuit of U.S. Communists and their sympathizers consumed the energies of the Executive Branch, lawmakers, and the courts. Rarely in the nation's history have constitutional rights been so widely and steadily sacrificed.

"The event which most prompted the Americans to make a peacetime military commitment to Europe was the Berlin Blockade. To the Allies this was sure evidence that a stronger and permanent military presence was necessary to prevent Soviet expansion in Europe" (Falk 122). It was formed in 1949, and it was designed for mutual defence. Members agreed that if someone attacked one of them, then they would be attacked each member.

On June 25, 1950, the Korean War began when approx. 100,000 soldiers from the North Korean People’s Army poured across the 38th parallel, the boundary between the Soviet-backed Democratic People’s Republic of Korea to the north and the pro-Western Republic of Korea to the south. This invasion was the first military action of the Cold War. “When the North Korean troops refused to withdraw, the US demanded that the UN come to defense of South Korea. A UN force was made up from 32 countries, led by American forces, was sent to fight in Korea. In total, 1,000 Canadian were wounded and 400 were killed. By the time the war was over in July 1953, although both sides agreed to an armistice, Korea remained divided” (Falk 122). 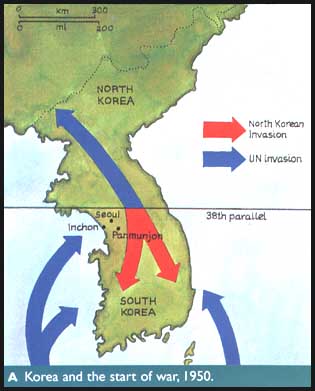 The Warsaw Pact, (named that because the treaty was signed in Warsaw), included the Soviet Union, Albania, Poland, Romania, Hungary, East Germany, Czechoslovakia, and Bulgaria as members. The treaty called on the member states to come to the defense of any member attacked by an outside force and it set up a unified military command under Marshal Ivan S. Konev (Soviet Union). The introduction to the treaty establishing the Warsaw Pact indicated the reason for its existence. When the US created and the other members of NATO decided to make West Germany a member of NATO.The Soviets obviously saw this as a direct threat and responded with the Warsaw Pact.

Lester Pearson as the Canadian Minister of External Affairs

At the United Nations, Canadian Minister of External Affairs Lester B. Pearson proposed deployment of an international peacekeeping force to control the situation while Britain and France withdrew their forces. Pearson came out from the Suez Crisis as hero, winning the Nobel Peace Prize for his role in resolving the conflict.
http://www.thecanadianencyclopedia.com/media/pearson-lester-b-4035.jpg

"In 1956, Egyptian President Nasser seized the Suez Canal (a vital trade route) from Britain and France. So, in response, Britain and France joined with Israel to attack Egypt. The Soviet Union sided with Egypt and demanded that they withdraw" (Falk 123). Although Canada had no direct economic, military or political stakes in the crisis, Canadian Foreign Minister Lester Pearson became a main player at the United Nations. Working endlessly from the end of October into early November 1956, Pearson proposed the world’s first ever-peacekeeping force at the UN General Assembly. Using his vast web of connections and decades of experience, he persuaded the world assembly to make the UN force a reality.

The Soviet Union announced that it has successfully tested an intercontinental ballistic missile capable of being fired "into any part of the world." The announcement caused great concern in the United States, and started a national debate over the "missile gap" between America and Russia. In July 1957, the United States seemed to win the race when the Atlas, an ICBM with a speed of up to 20,000 miles an hour and an effective range of 5,000 miles, was ready for testing. The test, however, was a disaster. The missile rose only about 5,000 feet into the air, tumbled, and plunged to earth. Just a month later, the Soviets claimed success by announcing that their own ICBM had been tested, had "covered a huge distance in a brief time," and "landed in the target area" (Cold War Museum). "In 1953, the Royal Canadian Air Force requested a new aircraft to meet the growing needs of defence in the Northern Hemisphere because Canadians were concerned with the possibility of a Soviet attack. The RCAF wanted a supersonic long-range jet to be developed" (Falk 131). The plane was the pride of Canadian aircraft manufacturer A.V. Roe Canada, better known as Avro, then the third-largest company in Canada. The hypersonic fighter was on the cutting edge of aerospace technology at the time: it could reach a speed nearly three times the speed of sound, travelling at an altitude of 60,000 feet (Avro Arrow - The Canadian Encyclopedia). On March 25, 1958, the Avro Arrow had its first flight. The first flight of the Arrow should have been a crowning moment for the Canadian aerospace industry. Yet the plane was scrapped by the federal government just a few months later. 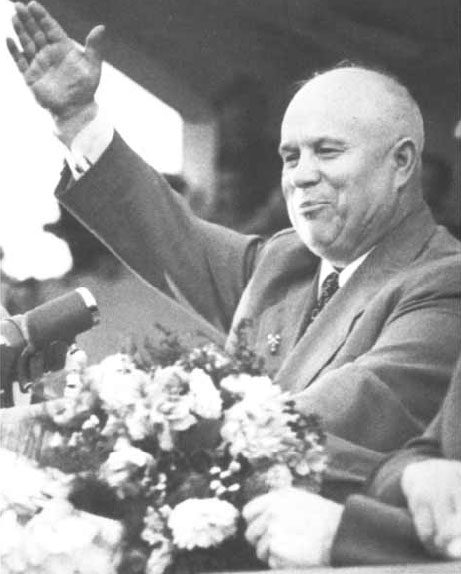 Cuban leader Fidel Castro established the first communist state in the Western Hemisphere after leading an overthrow of the military dictatorship of Fulgencio Batista in 1959. He ruled Cuba for nearly 50 years, until handing off power to his younger brother Raul in 2008. During that time, Castro’s regimen was successful in reducing illiteracy, stamping out racism and improving public health care, but was widely criticized for oppressing economic and political freedoms.

The Rise of the Berlin Wall

As tensions grew between the Soviet bloc and the western allies, passage between the zones shrank to a small stream. In 1961, the split was formalized with the construction of a wall. These East German troops and workers are increasing the height of the barrier between east and west Berlin.

During the Cold War, the US and the Soviet Union stockpiled their nuclear weapons in various countries around the world. "In 1962, The United States spotted Soviet missiles in Cuba through aerial surveillance. Advance warning of a possible Soviet nuclear attack on the US had now been reduced from half an hour down to a few minutes. The US set up a naval blockade around Cuba, defying Soviet ships to continue bringing in missiles to Cuba" (Falk 123). Everyone thought this would start a nuclear war. American President JFK and Soviet leader Krushchev wrote to each other, and made a promise. the Soviets promised to remove all the missiles in Cuba if the Americans promised not to invade Cuba (Falk 123). Kennedy also secretly agreed to remove U.S. missiles from Turkey.

Pierre Trudeau was the leader of the Liberal Party and the Prime Minister of Canada in 1968. "Trudeau implemented the Official Languages Act in 1969, in order to make Canada truly bilingual and bicultural. Trudeau believed that this would help Quebec feel like a part of Canada" (Falk 130). He was the PM during the late periods of the Cold War, and wished to stop it. "What Trudeau was, in fact, was typically French Canadian in his attitude to the military, to NATO, and to the Cold War. He was no isolationist, but he was not one to believe in the military, or one to want to take on the difficult global tasks that kept the peace. Puzzlingly, given his views on nationalism, he would become a nationalist icon in English-speaking Canada. Predictably, he would be the key figure in weakening the country’s support for the verities of the Cold War" (Canadian Military Journal Vol. 12, No. 1). SALT I was the first of the Strategic Arms Limitation talks between the Soviet Union and the U.S. Communist leader Leonid Brezhnev, who was the general secretary of the Soviet Communist Party, met with U.S. President Richard Nixon in November of 1969 to come up with a treaty that would contain the arms race (SALT 1 - Strategic Arms Limitation Treaty).

Mikhail Gorbachev, General Secretary of the Communist Party of the Soviet Union

When Mikhail S. Gorbachev became general secretary of the Communist Party of the Soviet Union in March 1985, he launched his nation on a dramatic new course. His dual program of "perestroika" and "glasnost" introduced profound changes in economic practice, internal affairs and international relations. Within five years, Gorbachev's revolutionary program swept communist governments throughout Eastern Europe from power and brought an end to the Cold War.

As the Cold War began to die down across Eastern Europe, the spokesman for East Berlin’s Communist Party announced a change in his city’s relations with the West. Starting at midnight that day, he said that citizens of the GDR (German Democratic Republic) were free to cross the country’s borders. Berliners, from both sides, flocked to the wall, drinking and chanting “Tor auf!” (Meaning “Open the gate!”). At midnight, they flooded through the checkpoints. More than 2 million people from Eastern Berlin visited Western Berlin that weekend to participate in the greatest street party in the world. Berliners brought hammers and picks to knock down the wall while bulldozers and cranes pulled down sections of the wall. After the wall was gone, Berlin was united for the first time ever since the wall was erected. The unification of East and West Berlin was only made official on October 3, 1990.