Archduke Ferdinand and wife are shot There were multiple assassination attempts on the heir to the throne. The man had a bomb that was supposed to kill the Archduke. The second man had a bomb and a pistol. The third man of the terrorist organization threw a bomb that bounced off of Archduke Ferdinand's car onto another car.

It was by chance that Gavrillo Princip was near the motorcade when it stalled after trying to take a different route. He fired two shots, the first into the jugular vein of the Archduke and the second into the torso of the Duchess. The Duchess died before arriving to their mansion. The Archduke died 10 minutes later.

Czar Nicholas and Family are killed

First Battle of the Marne In the spring of 1917, the United States entered World War One. They joined the Allies- France, Britain, and Russia. Although many Americans, and Woodrow Wilson, did not want to enter the war, the situation eventually became undeniable, forcing the US to enter. When 128 Americans were killed by the sinking of the Lusitania from German U-boats, the US was angered. This, along with the Zimmerman telegraph, were major events that eventually caused America to join the war efforts.

Lenin and his group took over Russia in late 1917. His leadership in the Bolshevik party allowed him to do this. He did so by controlling forces while in hiding. Lenin sent the Bolsheviks into Petrograd, the capital. Once in the capital, the Bolsheviks fired on and took over the Winter Palace, allowing them to take the government by control as well. 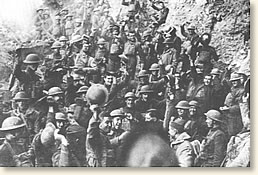 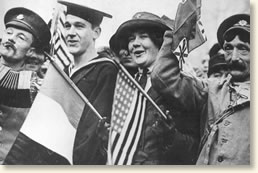