"The Epic of Gilgamesh"

"The 'Epic of Gilgamesh' is the greatest work of ancient Mesopotamia and one of the earliest pieces of world literature" (Puchner 54). Inscribed on clay tablets in the oldest form of written language, cuneiform script, the story of King Gilgamesh is one that was first passed down ancestrally through oral tradition. Reflecting historical events of Gilgamesh, it depicts themes and beliefs associated with the Ancient World. The world's oldest epic hero faces "the most fundamental questions of what it means to be human: death and friendship, nature and civilization, power and violence, travel adventures and homecoming, love and sexuality" (Puchner 54). Intertwined throughout this story is the common influence of the gods and their power to change one's destiny and intercede on behalf of humanity. These powerful themes and intriguing spiritual influences are relatable and relevant to literature to this day. 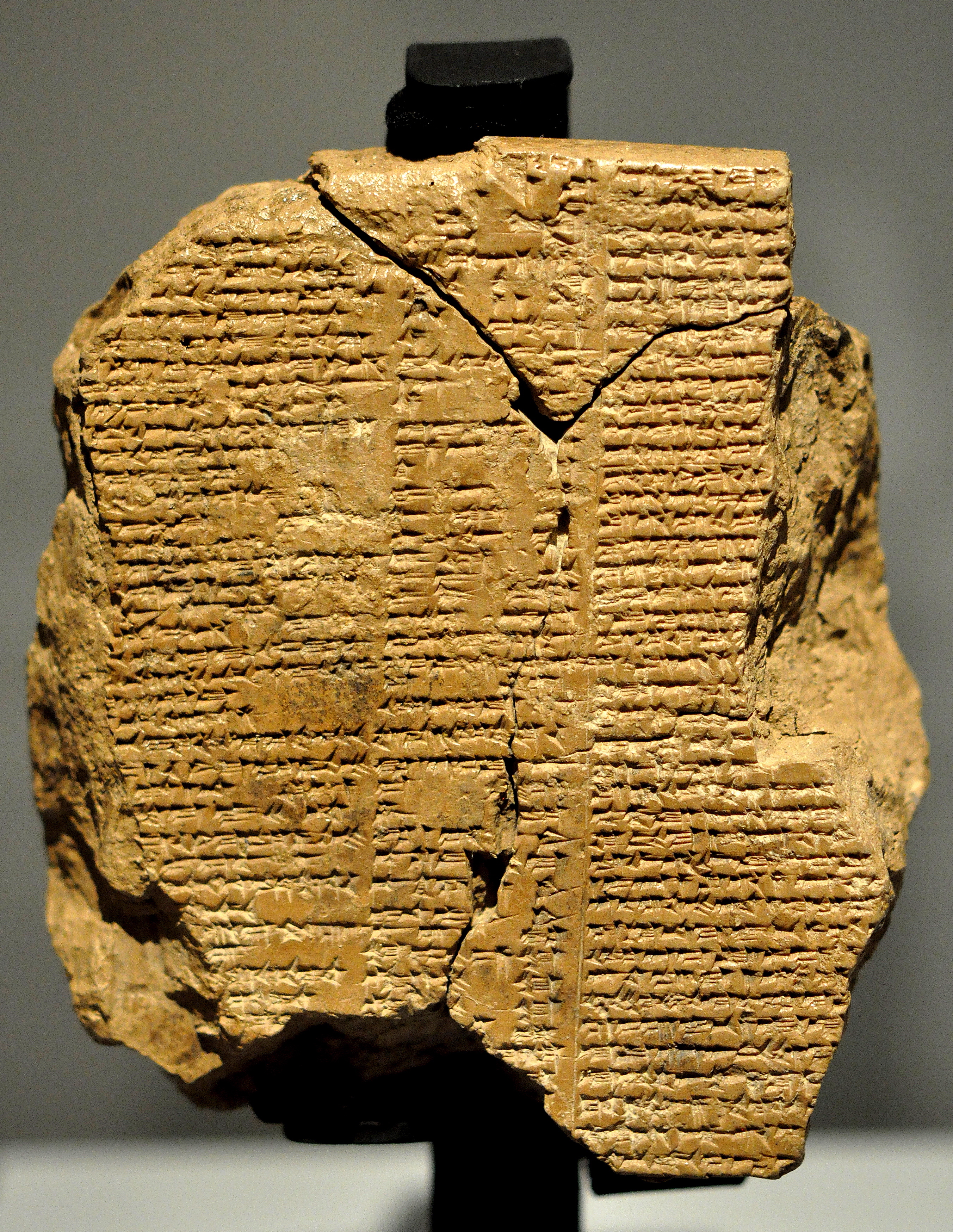 The Holy written word of God is arguably the world's most influential text ever to exist. Composed and created by many different authors such as Moses, King Solomon, and a multitude of prophets, the bible's "profoundly monotheistic interpretation of human life and the universe as creations of God" influenced a multitude of other relgions like Judaism, Christianity, Islam, Mormanism, Catholicism, and more (Encyclopedia Britannica). This crucial difference to other famous influential ancient world literature is the many writers who make up the bible. This causes some repetition or discrepencies. "The various sources have been put together with great skill, and the result is a text of extraordinary literary, philosophical, and theological richness (Puchner 111). "The Hebrew Bible" chronologies the creation of the universe, earth, animals and humans and the people of Jewish descent, or the first man (Adam) and woman (Eve). Like other works of literature of this era, it relays themes of adventure, belonging, searching for home, human nature, and mortality. The Bible is clearly the most well-known piece of literature that has stood the test of time and is relevant to current society. 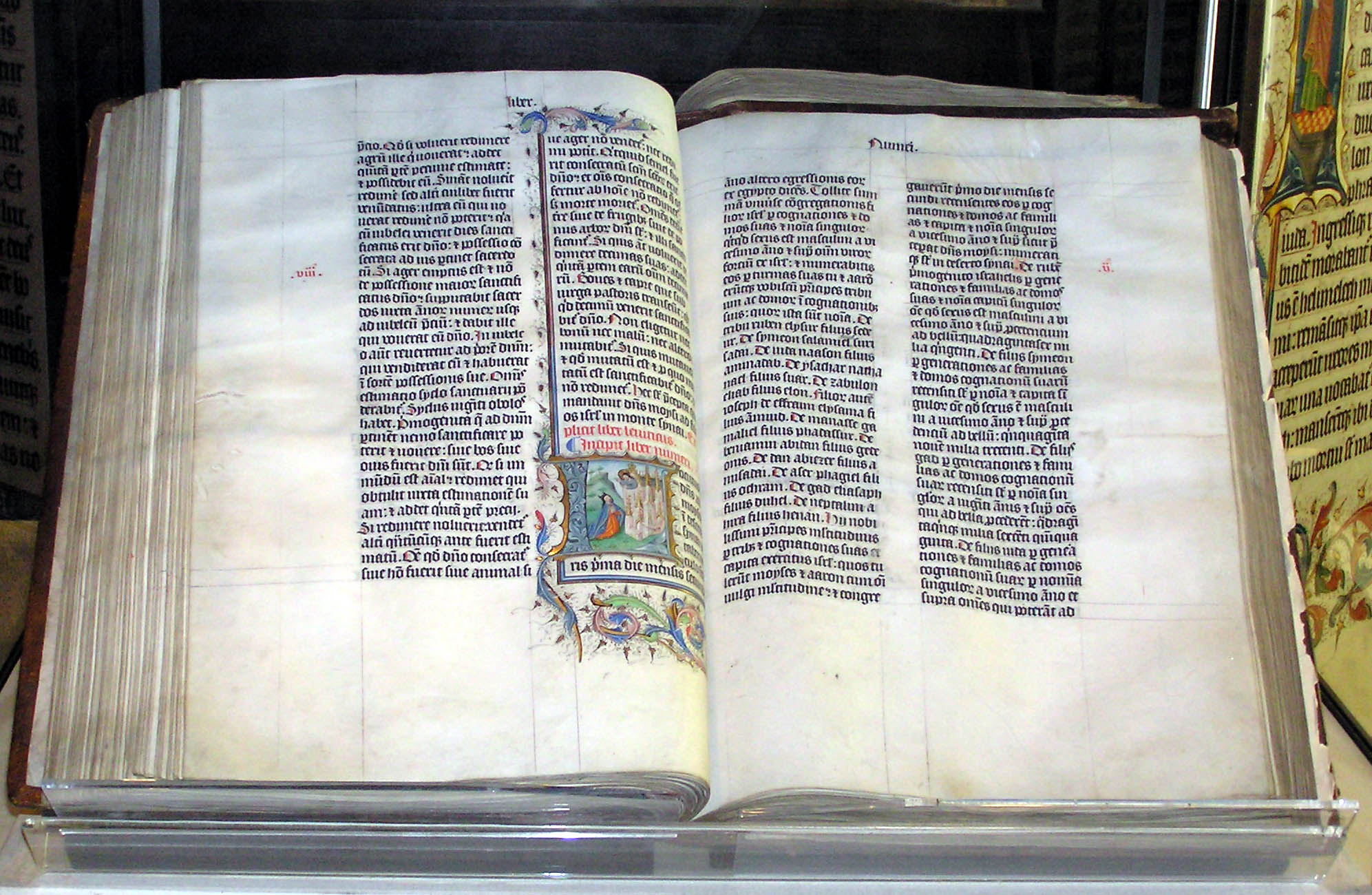 Homer's epic poems "The Iliad" and "The Odyssey" recount the historical greek Trojan War between Troy and Sparta, highlighting mythical accounts of Odysseus, Achilles, Agamemnon, Hector, Paris, Helen and the gods Zues, Thetis, Apollo, and many others. Like most literature of this ear, the gods play an influential role in human life. Characters cry out for their help, while at their mercy and demise. The idea of fate is challenged, along with themes of hospitality, war, mortality, loss, and love. Homer was "a poetic pioneer who stood at a pivotal point in the evolution of Greek society from pre-literate to literate, from a centuries old bardic tradition of oral verse to the then new technique of alphabetic writing" (Classical Literature). Homer's poetic form was a sort of musical syllabary in hexameter verse, influencing many other writers like Virgil and Sophocles. He wrote "extraordinarily vivid portrayals of people, social relationships, and feelings, especially our incompatible desires for honor and violence, and for peacee and a home" (Puchner 181). There is much contention surrounding the works of Homer and whether he was the sole author, blind, and able to create such long epics orally by memory. To this day, his writings are relevant and popular in literary society. 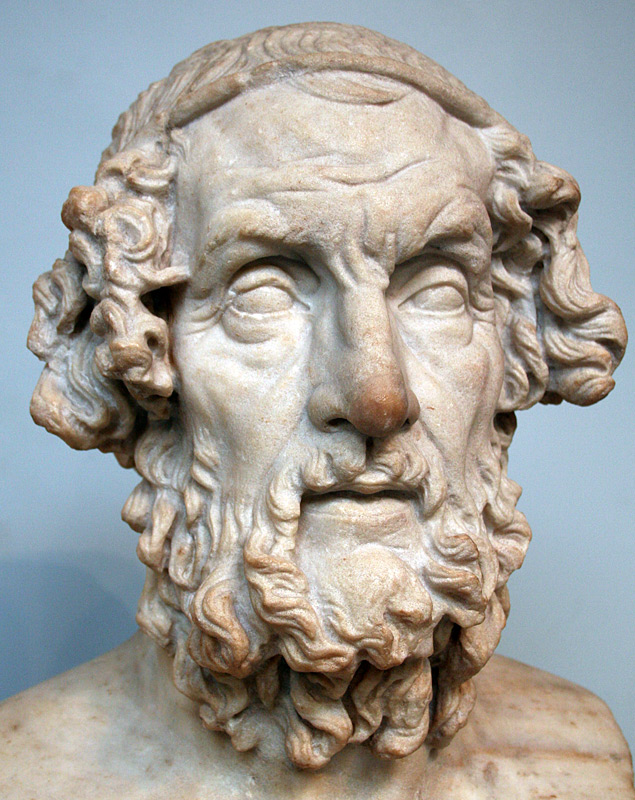 The father of children stories, "Aesop's fables, an enjoyable hodgepodge of funny anecdotes, proverbs, animal stories, and morality tales from the ancient Greco-Roman world" are far different from most "classical literature" (Puchner 582). Using animal characters to relay moral lessons, Aesop was one of the first writers to employ satire to relay a larger meaning in a humorous way. His characters are aimed at the lowly, relating more to the lower classes than aristrocrats and teaching them to accept the status quo. There is little hope and no happy endings to his stories, but teach valuable life lessons to fear or inspire the masses. Stories like "The Boy Who Cried Wolf" descend from these fables and are wildly popular and well-known today, making Aesop incredibly influential in ancient world literature. 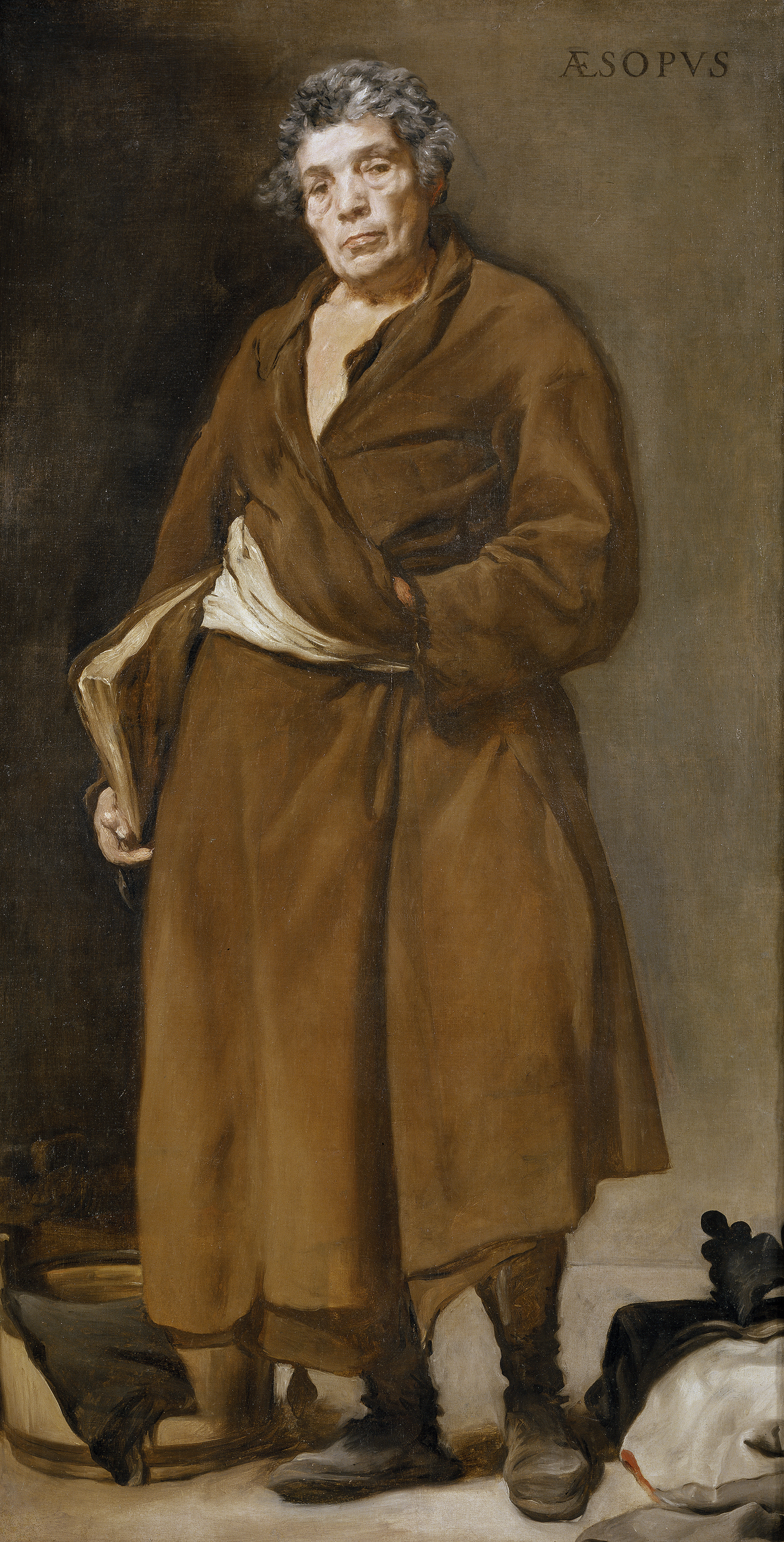 Sophocles was author to incredible plays of ancient Athens like "Oedipus the King", portraying characters with incredible depth and subtletly, and encourage us to "ask what it means to be part of a family, part of a city, part of a team or an army, or part of the human race" (Puchner 660). He was largely influenced by the writings of Homer and well-known as being the "most Homeric" of Athenian tragedians (Puchner 661). "Oedipus the King" is the basis of the infamous "Oedipal Complex" by Freud, analyzing the strange love of a child for the opposite-sex parent and competition or hatred of same-sex parent. Oedipus was fated to kill his father and marry his mother, a repulsive tragedy he tries unsuccessfully to alter. Sophocles is important in influencing literature to this day because his "characters are intense, passionate, and often larger than life, but always fully human" (Puchner 661). He analyzes the human desire for heroism against its' voice of moderation, while integrating the well-known Greek mythological characters. Sophocles was a loved, trusted, easy-going leader of Greek society and is popular to this day. 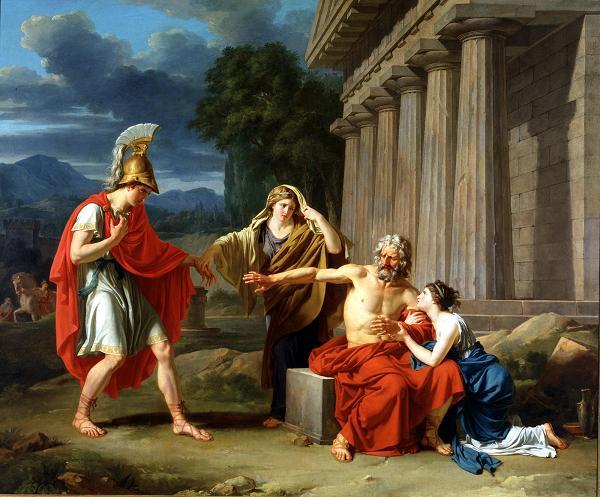 Virgil's "Aeneid" has "been one of the most profoundly influential works of all classical literature in the later Western cultural and literary tradition" (Puchner 977). This 12 book poem may seem, to some, as a form of propaganda for the Roman government, however, it beautiful depicts human nature's sense of duty, adventure, dreams, love, loss, and pain. Virgil witnessed the rise of the great Roman Empire, Julias Ceasar, and Octavian (Augustus) and wrote "The Aeneid" for Ceasar Augustus. The story tells of Rome, the destruction of Troy, and Trojan Aeneas' journey to find home. He has many adventures, an affair with Dido, queen of Carthage, and even takes a trip to the Underworld to meet his father. The story closely parallels real-world events like the Trojan War, Antony and Cleopatra's affair, and the rise of Augustus' empire. Largely influenced by the literary works of Homer, Virgil "borrows Homeric turns of phrase, similes, sentiments, and whole incidents", while offering an ending to the parts of the famous stories left untold (Puchner 979). Virgil glorifies the ideal Roman leader or soldier through his storytelling of Aeneid, fighting for his country instead of his own personal glory. The word pietas comes from "The Aeneid", a word meaning "pity" and "piety" (duty). "But whereas duty may suggest adherence to a set of abstract moral principles, the Latin word connotes devotion to particular people and entities: to the gods above all, but also to one's country, leaders, community, and family" (Puchner 980). Aeneid shows the side of power and the cost of power, making the audience empathize with the characters good and evil actions. Virgil's influence on Ancient literature is profound and well-known to this day. 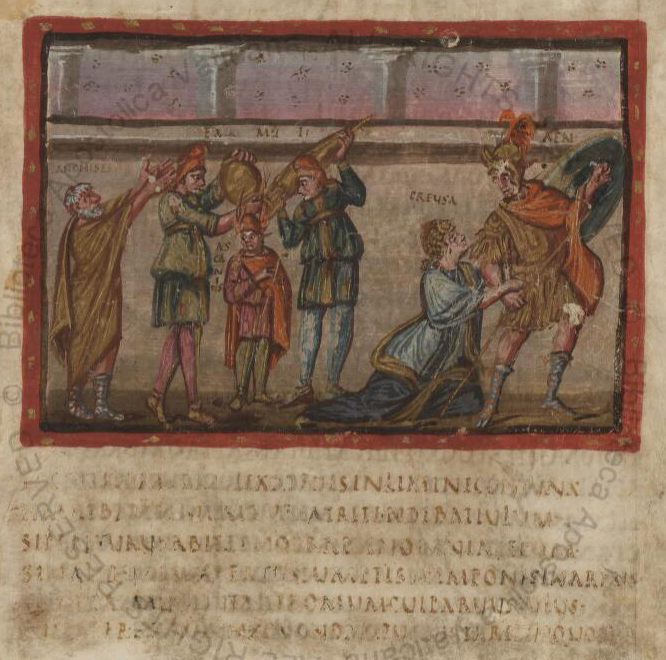