The first known democracy in the world developed in Athens, Greece, around 500 BCE. Each year, 500 names of Athenian citizens would be drawn to act as a representative government. For the year, citizens would be responsible for proposing new laws, in addition to controlling all parts of the political process. Laws would not be immediately enacted, the proposed laws would then be voted on by the citizens of Athens, the day of, in an assembly - direct democracy.

The Magna Carta, signed by King John (England) in 1215, was the first written constitution in European history. A series of short-comings, both in battle and in relations with the barons, caused tension between the king and the barons. After negotiations stalled, civil war broke out, King John conceded, agreeing to the terms outlined in the document (Magna Carta).

This document subjected the King, and any future English leaders to the rule of law - the first time in English history that this applied. The document also outlined freedoms for individuals. Although the individual rights were only reserved for the elite class for centuries to come, the document has been used as a template for many constitutions and was still a revolutionary document at the time. (It just took a few hundred years for the principles outlined to reach the masses)

The below photo depicts the signing of the Magna Carta. I can't help but notice how displeased King John looks to be participating. 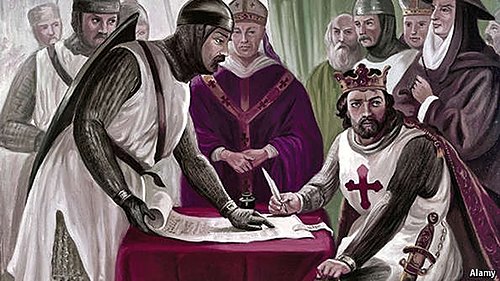 The Renaissance was a period of time in which European scholars revived old ideas about the worth of the individual, importance of life and man's role in the world. These ideas weren't new - many scholars (not just in Europe) were leaning on, and expanding upon ancient Greek ideologies, which were largely humanistic and individualistic. These ideas, derived from Ancient Greek thinking, began influencing many powerful people across Europe. Artists began using perspective in their works, depicting the real world, with real people in it. The main shift seen during this era was a shift (or a nudge anyway) toward humanism and away from the idea of an all powerful God being the only entity capable of creating something incredible. This change is seen with the shift from painting churches and church officials to artists painting real-life images with depth and personality. This period saw people begin to think and act freely (through art anyways) and challenged the idea that God and the church were the only all-powerful entities.

The photo below of the famous "Mona Lisa" painting is a perfect example of the shift in art styles and subject matter. Depicted is a realistic depiction of a female figure, no churches God paraphernalia to be found. 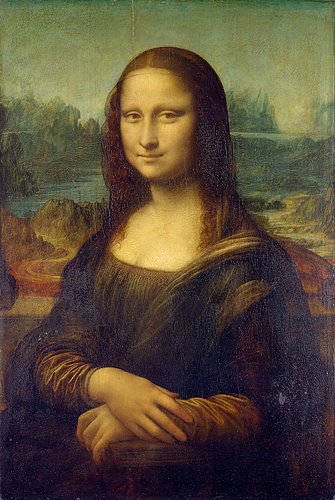 The Haudenosaunee Confederacy (Iroquois or People of the Longhouse) was a confederacy comprised of Aboriginal nations. The confederacy recognized the "Great Law of Peace" as the uniting force, the constitution, and rules to live by in society. The Great Law of Peace also divided power amongst the different levels of government, established equal participation of both men and women in government processes, and even guaranteed certain rights and freedoms (free speech being one example). It's a common belief that the way the Iroquois governed themselves was a large driving force behind how the U.S. structured their government, post revolution.

The picture below portrays a Haudenosaunee longhouse and community members working. This photo shows women working in the village while the men (most likely) were hunting. The individual was valued in all levels of society - each individual contained a set of skills that would help sustain the tribe. 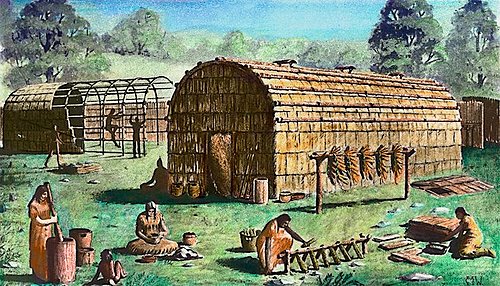 The Reformation was a religious movement advocating individual worth and agency aimed to reform Christianity and remove corruption from the churches. Martin Luther, a pastor and professor, was one of the (if not the) biggest perpetuators of the reformation. Luther saw corruption of the church in a variety of ways, but perhaps the most significant was the system of "indulgences", where citizens could pay the church to be pardoned of sins in order to avoid purgatory. Luther was not the only intellectual aimed at reform; the desire for change was felt by many across Europe. These clashing views, those of the Catholic Church and those in favour of reformation, created countless persecutions and wars. The reformation did come with benefits, however. During this time period the printing press was invented, speeding up the printing rate for bibles, placing more bibles in more hands, and generally increasing literacy rates. With this period being such and outright questioning of the churches morals and values, I believe a shift in independent thinking began. If someone can question the church, there's nothing that can't be questioned.

The photo below depicts a printing press being used. The invention of the printing press brought along the ability to get information out to the masses, a strategy both sides would use throughout the reformation. 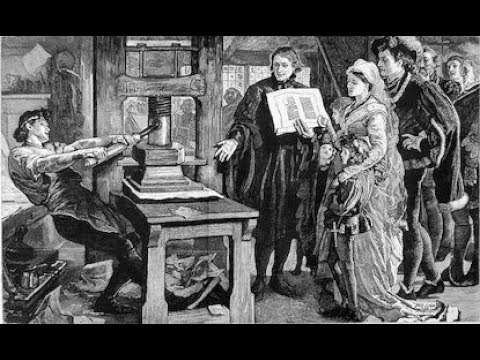 The Enlightenment was a period between the 17th and 18th centuries in which new ideas about the role of the individual and the use of logic and reason over faith emerged. Enlightenment thinkers believed that these new ideas could lead to a freer and more tolerant world. The ideas were not initially widely accepted because they challenged the very foundation their society was built. As Enlightenment thinker's ideas became more widely accepted, revolutions began (French and American), paving the way for the liberal society we live in today. The enlightenment thinkers' main ideas valuing the individual, individual thought, and reason saw a shift in thinking, causing individuals to want to take control of their own destiny, rather than blindly following a ruler.

The photo below is captioned "Enlightenment Thinkers". It showcases a room full of like-minded individuals who were revolutionary in thought, and detrimental to the evolution of society. 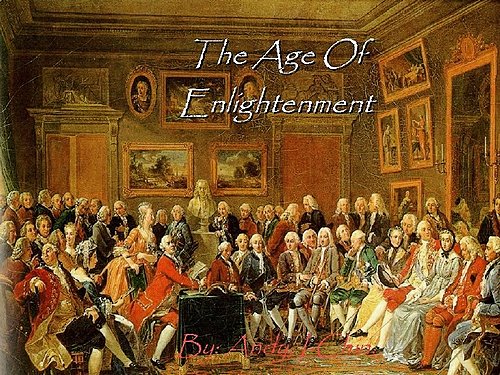 The Industrial Revolution defines a period of time in which machine manufactured industry usurped agriculture as Britain's main contributer to economy. One of the most revolutionary inventions at this time (one that's basic functional components are still used today) was the steam engine. The steam engine could run production machines in factories, power the locomotives that pulled the cars containing trade goods, and was even used to pump water out of coal mines, allowing the very resource it ran on to be better collected. The improvements in technology in the agriculture sector meant that farms required far fewer farmers to yield a crop, forcing many farmers into urbanized areas for work. This created competition for jobs do to the influx of people from rural areas. While there weren't any checks and balances in place by the government in the way of safe working conditions and standard pay, industry owners could pay as little as they wanted, and make as much as they could. Factory owners, bankers, and many other professionals were able to exercise their economic freedom and self-interest in order to accumulate wealth and gain social standing. This period was instrumental in propelling society forward, given the inventions, manufacturing and processing techniques and even seeing a new class of rich professionals.

The image below showcases multiple factories, pluming with smoke, and train tracks running every which way. This photo shows the scale manufacturing jumped to with the introduction of various industrial innovations. 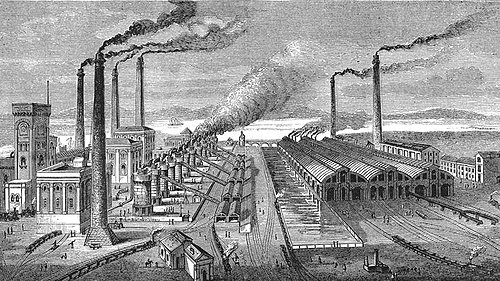 The American Revolution began due to tensions between residents of the 13 colonies and the colonial government (Britain). The tensions were mounting due to a collective feeling of lack of representation in the government along with imposed taxes from Britain. With the assistance of France, the 13 colonies forced Britain to surrender. The Declaration of Independence (1776) outlined the following 3 ideals, creating individual freedom that most colonists had never experienced: the right to life, liberty and the pursuit of happiness. Not only would they get to experience these 3 unalienable rights they would also have an individual say in who they would like to be governed by - democracy. The Declaration of Independence, as a result of the American revolution, outlined the basic rights and freedoms that are still protected and enjoyed to this day.

The image below depicts the Declaration of Independence. I feel this document is the most revolutionary thing to come out of the revolutionary war. It provided the building blocks to create a society of individuals by protecting and encouraging individual rights. 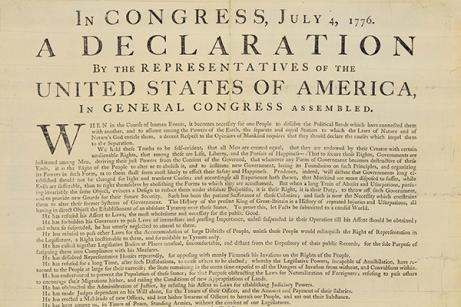 The French Revolution was an attempt to change society and transform the political landscape using liberal principles. The French monarch, Louis XVI had corrupt and outdated taxation systems, targeting the poorest of society (the Third Estate). In addition to this, France was bankrupt due to it's assistance with the American revolution and other wars. King Louis' indiscriminate spending only made his appearance worse when society caught wind of it.

The Estates General was an advisory body in which each of the three classes had separate representation, although the Third Estate comprised 98% of the country's population and could have their vote vetoed by nobility. Basically the Third Estate had no power, and wanted some. When the Estates General was called into session in 1788, the representatives of the Third Estate were not happy with the King's commitment, so they split and began to revolt against authority. On July 14, 1789, rioters stormed the Bastille (a stockade/prison where the King could lock anyone up without question or reason) in search of weapons and gunpowder - an event commonly referred to as the start of the revolution. Catching wind of this event, peasants in the country side began revolting, burning down houses of corrupt tax collectors.

On August 4, 1789, the Declaration of the Rights of Man and of the Citizen was adopted by the National assembly. The document outlined the Assembly's commitment to replace the current political system for one based on equal opportunity, freedom of speech, popular sovereignty and representative government. Although not all the principles in the document were followed, and the freedoms outlined applied only to men, this provided a newfound baseline of rights and freedoms to expand and build upon. This document gave the Third Estate hope of becoming equal with the other 2 classes, both in terms of political power and in basic human rights.

The photograph below portrays the storming of the Bastille, the event that began the revolution. This would have been a very empowering event for the revolutionaries, taking hold of a major weapons stock and secret prison. 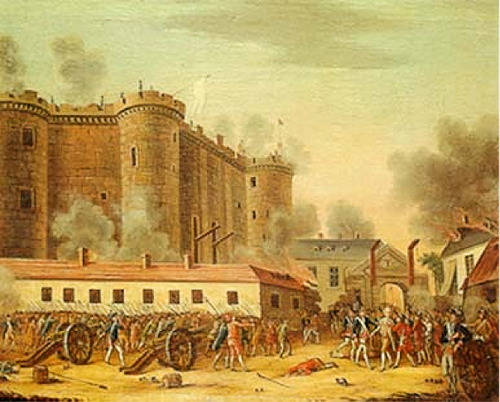 Changes to the Class System

Changes to the class system refers to the changes brought about by the industrial revolution. The revolution created a new class entirely, the " nouveau riche", or "newly rich". Previously, wealth was primarily attained through land ownership, whereas the industrial revolution saw a new class of professionals arise (bankers, factory owners, engineers, etc.). This new class became wealthy and began contesting the aristocrats for power and social standing. The newly rich were different than the aristocrats in one major way, their title and social standing came from business ventures and (most likely) hard work, whereas the aristocrats were born into their role. This change to the class system allowed individuals (mind you, very few compared to the number of poor) to better their own lives through financial endeavours and risk taking. Self-interest and economic freedom were at an all time high, allowing for far more opportunities than previously experienced.

The photo below showcases the poor working conditions factory workers were faced with. The economic freedom and self-interest exercised by the factory owners created these conditions along with great wealth for themselves. 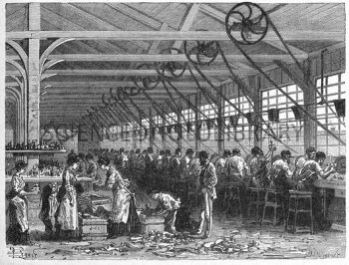