Sanger’s mother's early death from multiple miscarriages throughout her life motivated Margaret Sanger’s view on birth control. After nursing immigrants who nearly died from miscarriages or self-operated abortions, Sanger sought out to educate women on sex. After being found guilty for promoting birth control rights which violated the Comstock Act, she was sentenced to five years in prison. Sanger fled to Europe, had the charges dropped and brought over forms of birth control. She then opened up the first birth control clinic in Brooklyn, New York. Even though it was shut down shortly after it opened, it marked as a momentous event for women’s rights.
Sources:
https://www.mylifetime.com/she-did-that/october-16-1916-margaret-sanger-opened-the-u-s-first-birth-control-clinic 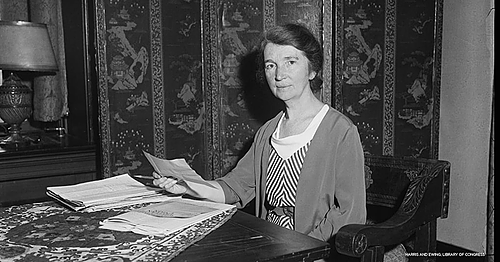 In 1938, the ban on birth control such as condoms and diaphragms, as a part of the Comstock laws, was lifted in a case involving Maragret Sanger. The Comstock laws, also known as the “parent” act, were passed in 1873 and made it illegal to send “obscene, lewd, immoral”, or “indecent” publication through the mail. These laws covered the topic of birth control and resulted in the arrests and convictions of multiple doctors who gave out information about how to prevent pregnancy. Although the federal ban on birth control was lifted, millions of unmarried women were still denied birth control throughout twenty six states.
Sources:
https://www.mtsu.edu/first-amendment/article/1038/comstock-act-of-1873
https://www.mtsu.edu/first-amendment/article/1038/comstock-act-of-1873
https://www.ourbodiesourselves.org/book-excerpts/health-article/a-brief-history-of-birth-control/ 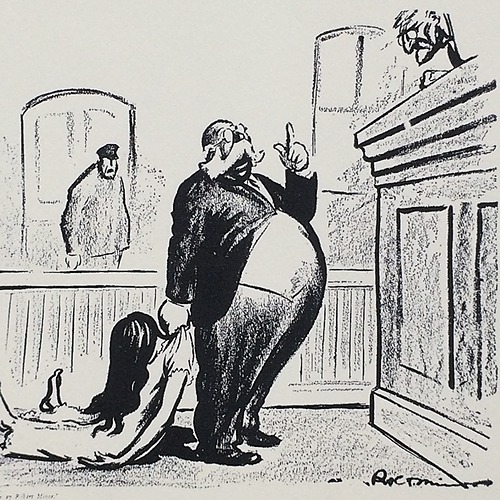 The Pill is Approved as Contraception

Based on clinical trials that started in 1956, the FDA approved birth control pills as a form of hormonal contraception in May of 1960. The first FDA approved birth control pill was called Enovid, and was for sale as an oral contraceptive. Margaret Sanger provided the initial funding for the Pill, which was about $150,000, throughout the 1950’s. Previously, birth control was simply a side effect of the Pill. It originally was used by women as a prescribed medication to correct irregular menstruation. The approval of the Pill was a major contributor to the sexual liberation of women and partially kick started the Sexual Revolution. Birth control pills also gave women more reproductive freedom.
Sources:
https://www.verywellhealth.com/a-brief-history-on-the-birth-control-pill-3522634
https://www.plannedparenthood.org/files/1514/3518/7100/Pill_History_FactSheet.pdf
https://www.bustle.com/p/11-crucial-moments-in-the-history-of-the-reproductive-rights-movement-62745 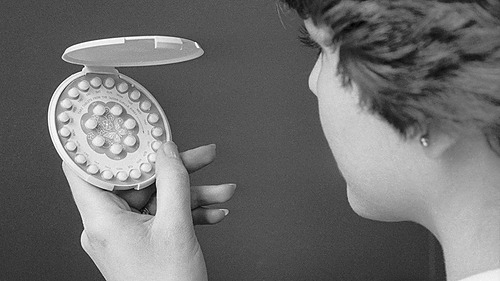 G.D. Searle, a pharmaceutical company, was approached by scientist Gregory Pincus to advertise and sell a breakthrough product that would contribute to world medicine and women’s health. Enovid was the first ever oral contraceptive to be manufactured and tested around 1958. The product prevents sperm from reaching the egg by thickening the cervical mucus. It was first distributed in Puerto Rico where 830 women tested the pill in efforts to control family sizes. Product was heavily criticized for its immoral ethics of killing a fetus. However, the contraceptive was then legalized by the U.S. Food and Drug administration in 1960.
Sources:
https://case.edu/affil/skuyhistcontraception/online-2012/pill.html
https://www.pbs.org/wgbh/americanexperience/features/pill-g-d-searle-develops-pill/

The head of Planned Parenthood of Connecticut, Estelle Griswold, along with doctor and professor at Yale, Dr. C. Lee Buxton, were arrested for providing contraceptives in patients. Although the federal ban for birth control was enacted during 1938, the state of Connecticut had its own laws prohibiting the distribution and sale of contraceptives. Connecticut court fined Griswold and Buxton $100. However, they appealed to the U.S. Supreme Court after the court upheld the punishment. Griswold and Buxton claimed it was a violation of the 14th amendment. Case ended in a 7-2 decision in favor of decriminalizing the usage of a contraceptive.
Sources:
https://www.oyez.org/cases/1964/496
https://www.thirteen.org/wnet/supremecourt/rights/landmark_griswold.html 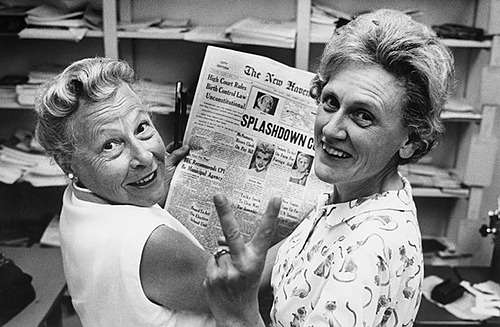 Jane Roe, a fictional name given to protect the plaintiff, filed a lawsuit against the district attorney of Dallas, Henry Wade. Originally, in an earlier hearing the Supreme Court disagreed with Roe on the idea that women had the freedom to decide the fate of the child. The court try to regulate the circumstances of when a woman is given the option to have an abortion based on the trimester the baby is under. If the fetus surpassed the first stage, women’s opinions were not validated until further notice by the state, physician and/or spouse. Roe appealed the case and ultimately won after it was proven it violated the 14th amendment.
Sources:
https://www.britannica.com/event/Roe-v-Wade 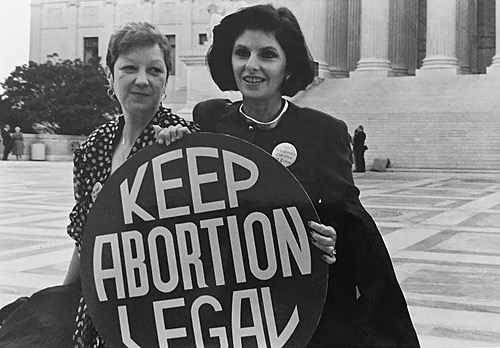 The Approval of Progestin-only EC

The FDA approved of Progestin-only EC, a medication that can be used as an emergency contraceptive. Progestin-only EC is more commonly known as one of many "morning after" pills that is available for sale to the general public. This pill gives women the opportunity to prevent pregnancy from occurring up to five days after intercourse. The use of this medication is useful in instances of birth control methods that may have failed or rape. Since the approval of Progestin-only EC, the rate of abortions have decreased because it allows women to choose to safely terminate a pregnancy without having to have an abortion.
Sources:
https://www.plannedparenthood.org/files/5713/9611/6188/Emergency_Contraception_History_and_Access.pdf
https://ec.princeton.edu/questions/morningafter.html Africa is a country that is sadly known for its unequal and sometimes abusive treatment of women. One such sexually abusive practice is called female genitalia mutilation (FGM). This is when a female’s genitalia is cut primarily to disable her from experiencing pleasure during intercourse. This can often result in infection, injury, infertility and even death, and is mostly practiced on young women under the age of 18. In 2011 the country of Kenya created laws to prohibit the practice of doing this to any females in the country, as well as making it illegal to take any young girls over bordering country lines to “cut them”. The laws also allowed for punishment including fines and jail time up to life imprisonment for anyone found performing genital mutilation on females. This was a huge step forward in reproductive rights for women in Kenya.
Sources:
https://evaw-global-database.unwomen.org/en/countries/africa/kenya/2011/prohibition-of-female-genital-mutilation-act--2011-
https://www.equalitynow.org/the_law_and_fgm
https://reproductiverights.org/document/female-genital-mutilation-fgm-legal-prohibitions-worldwide 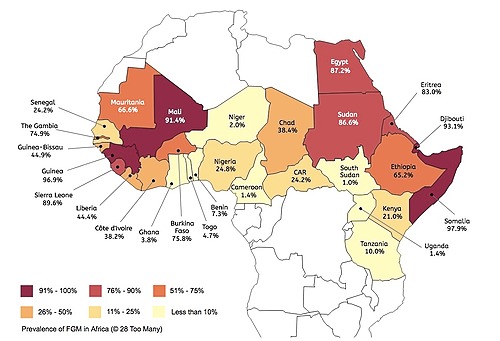 Throughout the entirety of Donald Trump’s presidency thus far, he and his administration have made a long string of attacks on the rights of women and their health. One of the most heinous policies Trump has passed was one of the first acts he passed as president, the Global Gag Rule. This act was passed in January of 2017, and it states that foreign nongovernmental organizations must choose between providing legal and safe abortion methods and receiving U.S. global health assistance. The Global Gag Rule affects the funding for many global health assistance programs provided by the United States such as funds for the treatment of AIDS/HIV and other various infectious diseases, contraception, and safe motherhood.
Sources:
https://reproductiverights.org/Trump-Administration-Strip-Mention-Reproductive-Health-Rights-State-Department
https://trumpglobalgagrule.pai.org/understanding-the-policy/ 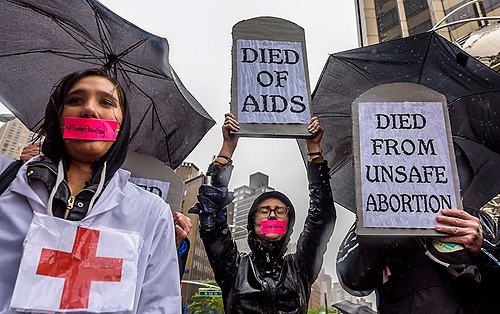 One of the most recent countries to have decriminalized abortion laws was Australia. Sydney, the capital of New South Wales and one of Australia’s largest cities, originally had abortion listed under the Crimes Act. If a woman violated a physician’s disapproval of an aboriton by continuing with the procedure, she could be incarcerated up to 10 years. The only way an abortion could be lawfully executed if a women’s life is endangered by the preganancy. The new law states that women now have up to 22 weeks to decide to continue the pregnancy. Anything afterwards would require the signatures of two specialist to approve of the abortion.
Sources:
https://www.cnn.com/2019/09/26/asia/abortion-australia-decriminalized-intl-hnk/index.html 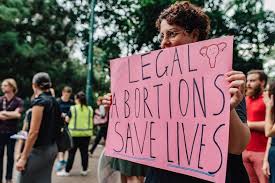