In 1821, Mexico gained its independence from Spain and became an independent country. This forced American land agents, called empresario, to renegotiate land grants and migration rights for Americans seeking to move to Texas. 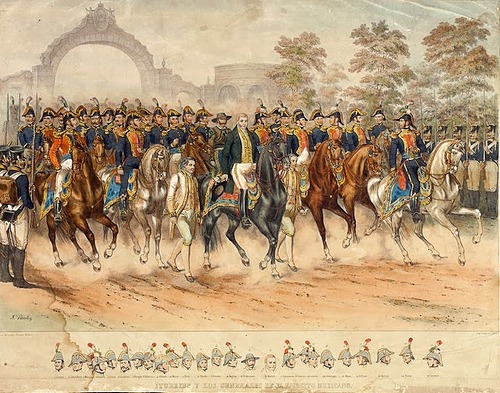 In 1823, Mexico passed a law which officially outlawed the purchase of new slaves and required the children of current slaves to be free. This law was opposed by Americans moving to Texas, who largely ignored it. Most Americans moving to Texas were from the Deep South and brought their slaves with them. It is estimated as many as 1/3 of Americans migrating to Texas were enslaved people. In 1827, Mexico outlawed the further introduction of new slaves. In 1829, they abolished slavery entirely, but granted Texas a one year exemption, meaning they were expected to fully abolish slavery in 1830. Americans were angered and sought to get around these laws by classifying their slaves as "indentured servants" and signing them to life-long work contracts. The issue of slavery would be one of the major causes of the Texas Revolution, as Americans were determined to keep their slaves in the face of Mexican abolition. 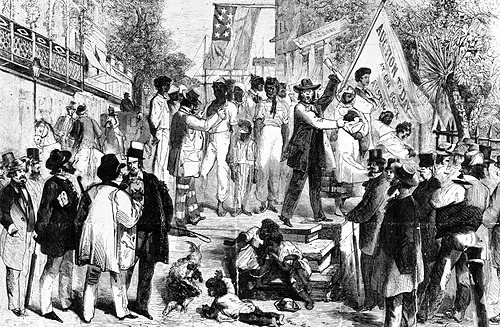 In 1823, Stephen F. Austin leads the first Anglo migration to Texas, establishing settlements in East Texas. Settlers received more than a 1,000 acres of land each. The land they settled belonged to the Karankawa tribe. Within two years, the Karankawa had been killed or forced west by the Americans. 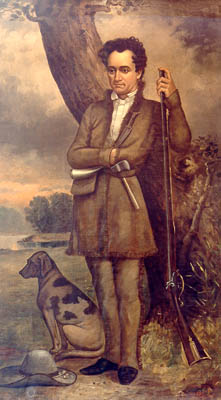 In 1824, in an effort to increase the population of Texas, Mexico passed the General Colonization Law. It encouraged migration to Texas, promising land and a 10 year exemption from paying taxes. In turn, Mexico expected new migrants to become Mexican citizens, obey all Mexican laws, and convert to Catholicism. This law led to a dramatic increase in American migration to Texas, with land-hungry Americans coming by the thousands. These Americans took advantage of the opportunity to gain land, but soon fell into conflict with Mexico by their refusal to convert to Catholicism and their ownership of slaves. Slavery was outlawed in Mexico. 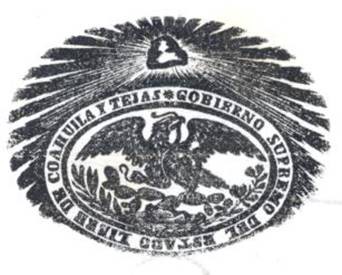 Fearing the growing Anglo power in Texas, Mexico banned all future American immigration to Texas in 1830. While this did slow down American immigration, it did not stop it. Americans continued to come to Texas, building towns and laying claim to land. By 1836, there would be more than 35,000 Americans living in Texas, significantly outnumbering the Mexican population. 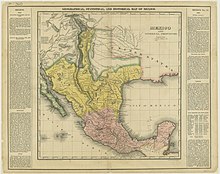 In 1834, Santa Anna took power in Mexico, becoming its military dictator. Americans in Texas opposed his assumption of power, not wishing to live under the rule of a dictator and concerned he would try to enforce abolition in the territory and force them to pay taxes to Mexico. Santa Anna was determined to crush American opposition in Texas and stem the tide of American migration. He began to organize military forces to occupy Texas. 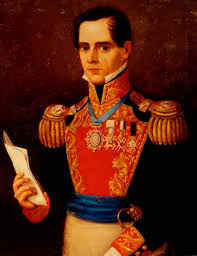 On October 2, 1835 the Texas Revolution officially began. Mexican soldiers marched on Gonzalez, Texas to confiscate cannons and were fired upon by American forces. Afterwards, the Americans set up a provisional government in Texas and their military commander, Sam Houston, won a series of minor skirmishes against Mexican forces. In response, Santa Anna began marching an army 3,000 strong north to crush the rebellion. 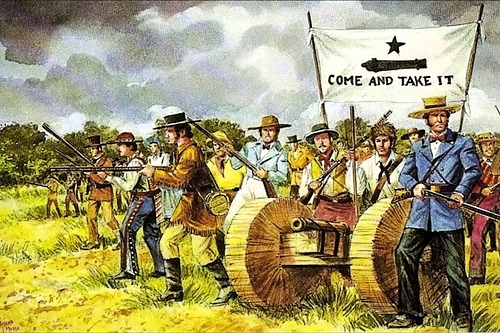 Leading his army north, Santa Anna and his 3,000 man army laid siege to the Alamo, a military fort in San Antonio on February 23, 1836. For 13 days, Santa Anna would bombard the fort with cannon fire. Inside, the Texan forces were led by Colonel William Travis, famous knife fighter David Bowie, and newly arrived Tennesseean and frontier icon Davy Crockett. In the early hours of March 6, the Mexican army attacked on all sides. Within an hour, the Americans were overrun and the siege came to an end. No Americans survived, with deaths numbered at around 180. The defeat at the Alamo would leave Santa Anna free to move east and pursue Sam Houston and his army. 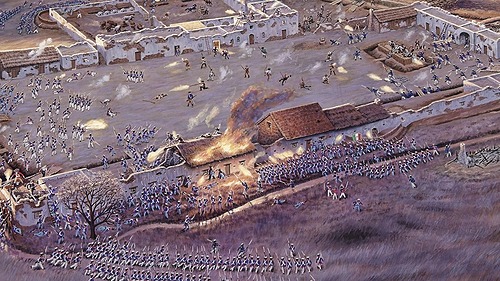 On March 2, 1836, while the Alamo was under siege, the American settlers in Texas officially declared independence from Mexico and proclaimed Texas a republic. Delegates at the convention declared David Burnet President, and affirmed Sam Houston as Commander in Chief of the Texan army. The Texans also proceeded to adopt a Constitution, which protected their right to own slaves. 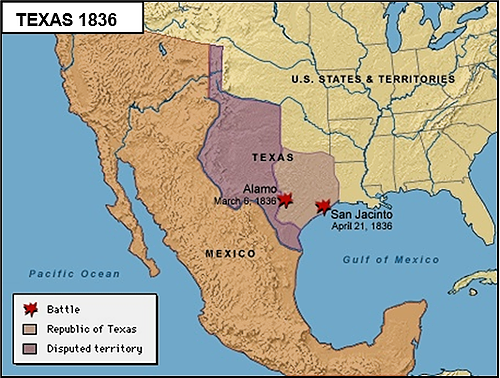 Following the Alamo, Sam Houston avoided Santa Anna's larger army for 6 weeks, seeking an opportunity to defeat the larger Mexican force. On April 21, he turned his army and attacked Santa Anna at San Jacinto. As the Americans charged, they screamed "Remember the Alamo." Houston's force decisively defeated Santa Anna in just 18 minutes. The Mexican army was routed and Santa Anna was taken prisoner. While his men wanted to execute Santa Anna, Houston insisted on keeping him alive and forcing him to sign a treaty recognizing Texas independence. This would mark the last major battle of the Texas Revolution. 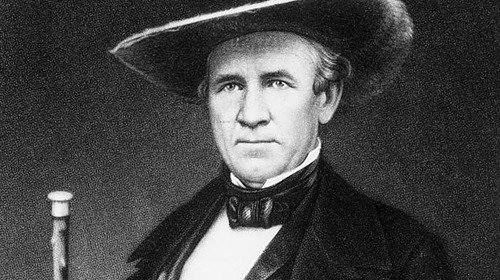 Following the victory at the Battle of San Jacinto, Sam Houston forced Mexican dictator Santa Anna to sign the Treaty of Velasco on May 14th. In the treaty, Santa Anna recognized Texas an an independent republic. The Texas Republic was born. While the Mexican Congress rejected the treaty, Mexico would make no more serious attempts to reclaim Texas. Texas named Sam Houston its first official President. Nine years later, in 1845 they would join the U.S. 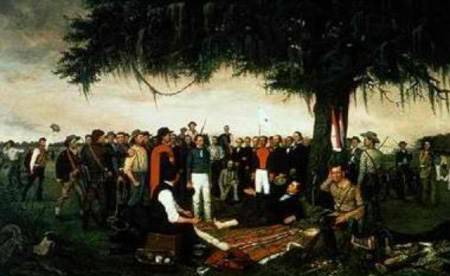