Summary: Henry Clay, of the U.S. state of Kentucky, proposed the Missouri Compromise (AKA the Compromise of 1820). The plan was signed by President James Monroe and passed in 1820. The Missouri Compromise was proposed to settle the issue of emitting a new state and the separation of a state. The Missouri Compromise stated that, firstly, Missouri would enter the union as a slave state. A portion of Massachusettes wanted to divide the state into Massachusettes and Maine. Secondly, the compromise created a line in which slavery could not spread across. Slavery was illegal for all new states in the Louisiana Purchase north of the southern boundary of Missouri (Lattitude of 36 degrees and 30 degrees north).

Northerners’ view: Northerners did not like this compromise because slavery was still being spread.

Southerners view: Southerners did not like this compromise because southerners believed that this event could be used as an example for Congress to make another law concerning slavery in the south. 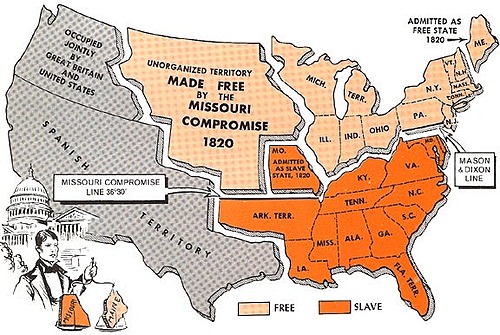 The Annexation of Texas

Summary:
Mexico made a contract with Austin and gave him land. Autin’s son sold some of the lands until 7000 Americans lived in the land. Mexico did not allow slavery but they allowed Americans to come with their slaves. Then Mexico got nervous and banned further immigration. Because many Americans had slaves in Texas, Texans also wanted slaves. This turned into a rebellion of Austin VS Santa Ana. Santa Ana won and killed 187-188 Americans in the battle called the Alamo. Texas was now on its own not representing Mexico. Texas wanted to join the United States as a slave state to lessen the threat of further attacks in 1837. The congress, however, denied Texas to join the union because it would upset the balance of slave and free states in the Senate, which would likely start a war. Days before Polk started serving in office as president, Texas was allowed into the Union as a slave state. And, soon after, half of the Oregon territory was also entered into the union but as a free state.

Northerners view:
The North was against the Annex of Texas because it would add another slave state, making it inequivalent. This would cause the South (slaveholding states) to have more votes in the Senate.

Southerners view: Southerners approved and would only gain from the annexation of Texas, a slaveholding state because they would gain votes in the senate and spread slavery. 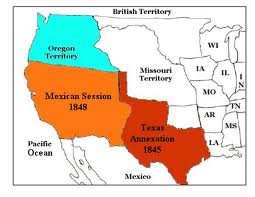 Summary: The compromise of 1850 was a package of 5 bills passed by the United States Congress. The compromise of 1850 helped decide the territories for slave states and free states. The north and south had multiple arguments about whether the territory should be a slave state or not. Henry Clay the senator of Kentucky created the compromise. While Stephan Douglas helped separate the compromise into 5 different bills. The Bills each stated different things. The first bill states that California would be a free state. The 2nd one states that New Mexico and Utah would be able to use popular sovereignty to decide whether the state should be a free or slave state. The 3rd bill says that the Republic of Texas had to pay off their debts to Mexico, they also have to give up their land which is now known as present-day New Mexico. The 4th bill states that the Slave-trade was so to be abolished in the District of Columbia. The 5th bill introduced the world to the Fugitive Slave Act.

Summary: The book Uncle Tom’s Cabin was an anti-slavery novel. It was written by Harriet Beecher Stowe. This book was very important because it has said to have laid the groundwork for the civil war. Uncle Tom’s Cabin made many people question the morality of slavery. The book unveiled the truth about slavery to many people. The books showed the cruelty of slave owners and it showed the hardships that most slaves had to go through.

Northerners view: The north finally understood the evils of slavery in a deeper meaning. The northerners were livid by the discovery, and worked harder and harder to end slavery.

Southerners view: The Southerners were enraged by this book. They named it as an inappropriate book. Most abolitionists felt that the book was not enough to immediately and slavery. Some people even said that the book portraited unrealistic thoughts of slavery 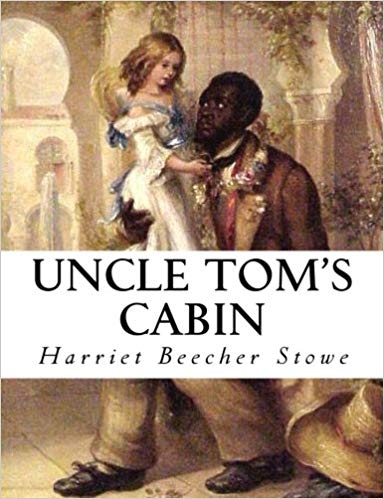 Summary: Stephen Douglas suggests the Kansas-Nebraska Act of 1854 to decide whether or not Kansas and Nebraska would have slaves. In the act, the citizens that live there will vote if slaves should be allowed. The Missouri Compromise declared that any states above the Lattitude of 36 degrees and 30 degrees north would be free. Both states lie above that line. If the citizens voted to have slavery it would break the Missouri Compromise. With this plan, people from both the north and south went to these states so they could influence the vote. Douglas’s main goal is to build a transcontinental railroad to go through Chicago.

Northerners view: Northerners did not agree with this Act because it means that Northern Land that originally was free could become a slave state if the citizens of that state voted for it. The north wanted to stop the spread of slavery.

Southerner’s view: Southerners loved this plan because they could continue the spread of slavery to northerners. 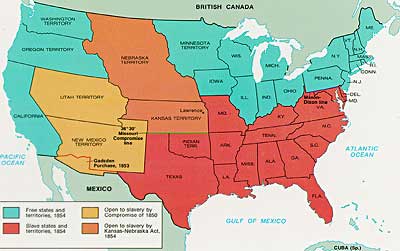 Summary: Dred Scott was an African American man born into slavery. In 1832, Blow, his original owner died. Dr. John Emerson bought Scott. Dr. Emerson eventually took Scott to Illinois (free), then to Wisconsin (free) where he met a slave, Harriet Robinson (his future wife). Dr. Emerson returned to St. Louis and found Scott a job in Wisconsin. Later, in 1846, Scott sued for his freedom. He claimed that because he was living in a free state and not as a slave that he was free. Through dispute of two different courts, the Supreme Court took the case in 1857. They ruled that Slaves are property and that he is not a citizen. Only citizens can form a lawsuit in federal law. They also said because of the 5th amendment, they cannot take someone’s property away from them. Later the 13th (1865) and 14th (1868) amendment gave Scott his freedom.

Northerners view: The northerners were against the supreme court’s ruling because they believe that Scott should be free. 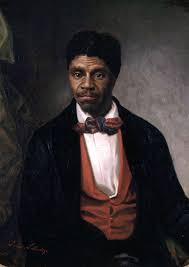 Summary: John Brown’s raid was always considered a suicide mission. Ryan had lead 21 men (16 white and five blacks) willing to die for what they believed in which was that violence could end slavery in Harper’s Ferry, Virginia. Brown rated that area because it had a large population of slaves and the land was between slaveholders and people who opposed slavery. Brown was captured by the local Militia. They had blocked all his escape routes.
Northerners view: Most of the Northerners supported the raid and considered John Brown a hero. However, some of them didn't support him. Some of them thought his actions were too extreme. This made some people worried that there would be drastic consequences because of his actions.

Southerners view: The South was extremely angry with the North, and saw these attacks as a threat to their way of life. The South was also angry with the people for supporting it because it resulted in the death of many children and women. They all thought that John Brown was an insane man and that he was a very dangerous criminal. 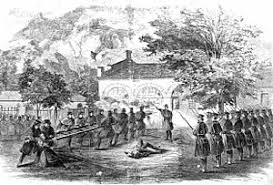 Summary: Abraham Lincon was elected on November 6th, 1860. The election had taken place in Charlotte, South Carolina. Abraham Lincoln was running for president for the Republican Party. The most unusual thing about this election was that there were 4 main people running for president. Usually, there are 2 main candidates for president. This made the election even more interesting. The other candidates were John C. Breckinridge for Southern Democrat, John Bell for Constitutional Union, and last but not least Stephan Douglas for Northern Democrat. During the election, everyone was divided over the matter of slavery so when Abraham Lincoln won it created a pattern of events that lead to the American Civil War. 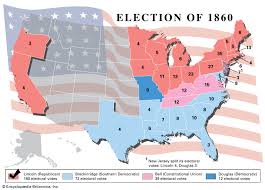 Summary: During the election of 1860, the southern states refused to even put Abraham Lincolns’ name on the ballot because of his anti-slavery beliefs. The southern states were outraged when Lincoln won the election because they felt they weren’t represented. This was the straw after the North also failed to uphold the Fugitive Slave Law of 1850 saying that slaves were to be returned to their owners. On December 20, 1860, South Carolina seceded from the United States of America.

Northerner’s view: The North, not wanting to go to war, tried to compromise and revamp the Fugitive Slave Law. However, that didn’t work. Then the North said that they didn’t have the right to leave the Union.

Southerners view: At this point, the Southerners wanted war. After South Carolina, many Southern states followed including Mississippi, Florida, Alabama, Georgia, Louisiana, and Texas. However, Virginia, Arkansas, Tennessee, and North Carolina did not want to go to war so they did not secede immediately. After the battle of Fort Sumter, Virginia, Arkansas, Tennessee, and North Carolina thought the Union would no longer support their needs so they also seceded. 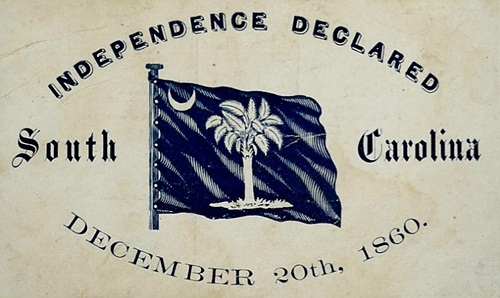