Northern Perspective: The North opposed the compromise, as it would admit a new slave state, giving slave-holding states more power in general. They also opposed the spread of slavery into new territory.

Southern Perspective: The South also opposed this compromise. The reason being that the compromise implied that Congress could now make laws about slavery. They also didn't like the idea of someone interfering with their "livelihood". 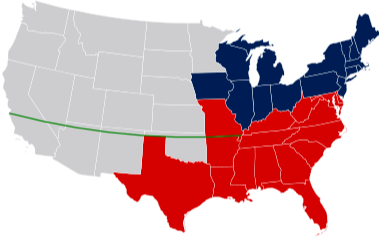 Summary: In the 1800's, Texas was owned by Spain. But in 1821, Mexico gained the territory, but not for long. General Sam Houston led the citizens of Texas in a war against Mexico. On April 21st, 1836, Texas gained independence, and became its own country (The Republic of Texas). Sam Houston was the nation's president, and Texas's capital city was named after him. In 1845, President Polk decided to annex Texas. Mexico disagreed, because they couldn't agree on a southern border. This disagreement would lead to the Mexico War.

Northern Perspective: The North disagreed with annexing Texas, because they opposed to the idea of slavery spreading to the new territory. They also opposed it because they could be overpowered by slave states if Texas became one. Also, they opposed because of the war that it could cause.

Southern Perspective: The South agreed with the idea to annex Texas, as they wanted to expand slavery into new territories. Furthermore, Texas was right underneath the Missouri Compromise line, so under the compromise it would be a slave state. 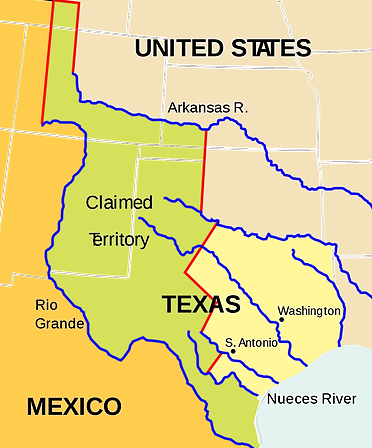 Summary: The Compromise of 1850 was to deal with whether or not the states acquired from the Mexico War (California, New Mexico, Arizona, and Utah) would be slave or free states. Suggested by Henry Clay, this compromise had four main ideas. First of all, California would be a free state. Secondly, Utah and New Mexico would determine if they were slave or free by popular sovereignty. Third, the slave trade would be completely abolished in Washington D.C. Finally, there would be a much stricter fugitive slave law. These points made up the Compromise of 1850, which would be used to settle arguments.

Northern Perspective: Although they seemingly gained more power in the Senate, the North opposed the compromise for other reasons. First of all, they opposed to the newly enforced Fugitive Slave Act, and ended up not enforcing it in northern states. Second, the Compromise of 1850 completely ignored the Missouri Compromise line, and left the issue of slavery unsettled.

Southern Perspective: Even though they lost California, they had a major victory with the Fugitive Slave Act. The South also had another victory with the promise of no federal restrictions on slavery in Utah and New Mexico. The South did not oppose this compromise, even if they would have less power in the Senate. 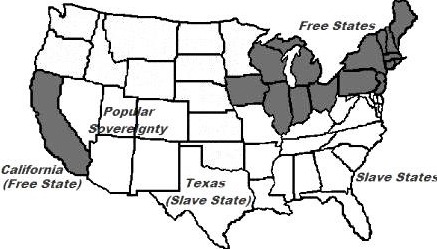 Uncle Tom's Cabin was written by Harriet Beecher Stowe, as a reaction to the recent Fugitive Slave Law. This book majorly influenced the way all Americans saw slavery. It did this by showing the reality of slavery, and inspired people to speak out against slavery. It has been said that this book built the groundwork for the Civil War. It even set the tone for the election of 1860. Northerners attitudes on slavery were reinforced by Uncle Tom's Cabin, securing a win for the Republican party.

Northern Perspective: Northerners were educated by this book, as most of them had no idea how bad slavery was. The book brutally made relations, and personalized slavery for the readers. Families would gather every night to read this book, and talk about its messages.

Southern Perspective: The South opposed this book, and the messages it gave to the readers. They opposed it so much so that it was illegal to own a copy of the book, and Stowe was presented as an evil villain. Some authors in the South wrote their own novels, challenging the messages in Uncle Tom's Cabin. These books portrayed slaves as helpless, and unable to fend for themselves, saying that slavery gave them a fair chance at survival. The opinions on this book also created more tension between the North and South. 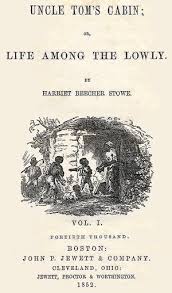 Summary: In the Nebraska territory, there was an increasing issue about whether or not it would be a slave holding territory. Then, Senator Douglas proposed an idea. He proposed that they could divide the Nebraska Territory into two states, Nebraska and Kansas. The people of the state would decide about slavery by popular sovereignty. This ended up causing a lot of chaos, as abolitionists and pro slavery groups would send people in to fight for the territory. People were sneaking in and voting illegally, giving a edge in the legislature towards this side. By the end of this, Kansas ended up having two governments and governors. This violence led to the nickname of Bleeding Kansas.

Southern Perspective: The southerners agreed with the Kansas-Nebraska Act. They agreed because it could expand slavery, as it would be decided by popular sovereignty. This question of slavery soon led to pro slavery groups committing election fraud, and fighting over the territory, making more tension between the North and the South. 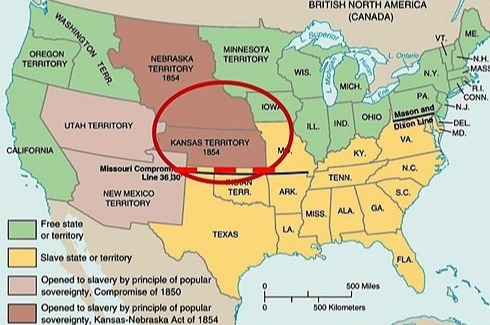 Summary: Dred Scott was born into slavery, owned by John Emerson. Emerson often traveled around the country, taking Scott with him. In 1847, Scott sued for his freedom, claiming that since Emerson took him to free states and territories for a long period of time, he should be a free man. The case addressed the following questions. He lived in Illinois, which was a free state. Did he become free living there? Secondly, did he also become free by living in the Wisconsin territory? Finally, did the Supreme Court have the power to hear this case? This case did in fact make it to the Supreme Court, in 1857. The Court ruled against Scott, saying that he wasn't a citizen, and he lost his freedom when he left Illinois. The judge also declared that the Missouri Compromise was unconstitutional, as that all territories was property of the people, and by law you can't take property.

Northern Perspective: The North opposed the decision, because it removed the Missouri Compromise line, which helped contain the spread of slavery. Without that line, the northerners were convinced that the South had plans to have a dominate ruling over America.

Southern Perspective: The South agreed with the Dred Scott decision, because they believed that Congress didn't have a right to stop the spread of slavery, and without the Missouri Compromise line, they could expand slavery without worrying about the law. 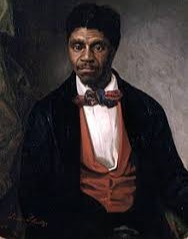 Summary: After the murders at Pottawatomie Creek, in 1859, in Harper's Ferry, John Brown led a revolt. His plan was to lead a small army of men into Harper's Ferry, raid an arsenal for its weapons, and arm the nearby slaves to let them revolt, and continue to the Appalachians. He ended up easily raiding the arsenal, and sent some of his men to collect hostages and inform slaves. No slaves showed support for him, but the local militia heard about his plan and surrounded him and his army, exchanging gunfire. Brown was arrested, and executed for treason, along with his men.

Northern Perspective: Although they viewed his actions as one of a madman's, northerners celebrated him as a hero because of his courage and dignity. Paintings were made for him, songs were wrote for him, making him instantly famous.

Southern Perspective: The southerners opposed John Brown, and were confused how the North could support him, because he destroyed property and threatened to kill innocents. They couldn't see how they could live with a government that saw Brown as a hero. John Brown's raid deepened the cut in the Union, and as the Election of 1860 arrived, the South was beginning to think about seceding.

Summary: The Election of 1860 was different than previous elections. Instead of 2, there were 4 major parties competing. There was Lincoln, who was Republican, Douglas, who was a Northern Democrat, Breckinridge, who was a Southern Democrat, and Bell, who was a Constitutional Unionist. Lincoln won the majority of the electoral votes (180), which paled in comparison to Breckinridge's 72 electoral votes. Lincoln's votes came from the Northern states, which wasn't surprising because many Southern state excluded him from the ballot. Even though he was excluded from the Southern ballots, Lincoln won the Election of 1860, much to Southerners dismay.

Southern Perspective: The southerners opposed Lincoln, because they were convinced that he was going to end slavery, and their business. They also didn't favor him because he came from the North, which would give the anti-slavery citizens an edge in Congress. The South decided that they would not be a part of this, so they started to secede from the Union, to the CSA. 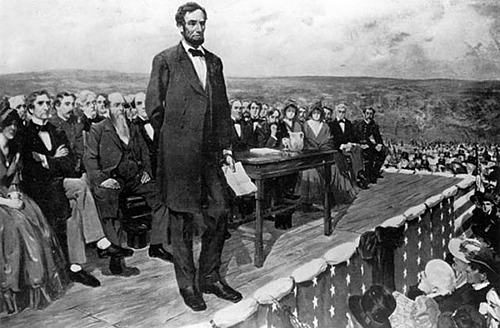 Summary: South Carolina came to America by it's own choice, so the citizens believed they could leave if they wanted to.. The governor, William Gist privately said that if Lincoln were to win the presidential election, he would secede. When Lincoln won, he summoned the state's legislature to meet at a special convention. On December 20th, in the afternoon, all the chosen delegates voted to secede. On the 24th, they issued a document that blamed their secession on the North's violence toward the slave trade. South Carolina became the first state to secede, but they were quickly followed by other southern states as well.

Northern Perspective: The northerners opposed secession in general, not just the secession of South Carolina. South Carolina's secession would lead to more states seceding, which sets the example that anyone could secede at anytime, which would destroy the country. Along with preventing slavery, the Northerners also wanted to preserve the Union.

Southern Perspective: Many of the southerners agreed with the reasons why South Carolina seceded, which one of the primary ones was the North's violence towards slavery. This led to many of the states seceding right after South Carolina. 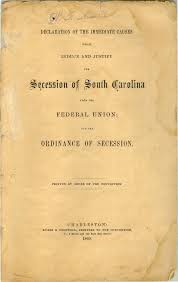