First Iranians who founded the First System of Postal Services

The documented claim (reported by Xenophon) attributes the invention to Cyrus the Great (550 BC), while other writers credit his successor Darius I (521 BC). Some other sources claim much earlier dates for an Assyrian postal system, and the credits are given to Hammurabi (1700 BC) and Sargon II (722 BC) 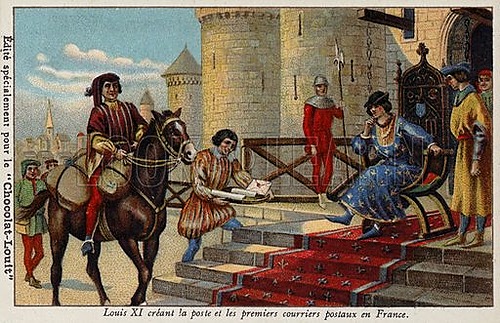 This article is about the communication system using towers with pivoting shutters. For the now closed railway in Adelaide, Australia, see Semaphore railway line. For other uses, see Semaphore (disambiguation).

A replica of one of Chappe's semaphore towers in Nalbach, Germany

Illustration of signaling by semaphore in 18th century France. The operators would move the semaphore arms to successive positions to spell out text messages in semaphore code, and the people in the next tower would read them.
A semaphore telegraph is an early system of conveying information by means of visual signals, using towers with pivoting shutters, also known as blades or paddles. Information is encoded by the position of the mechanical elements; it is read when the shutter is in a fixed position. The most widely used system was invented in 1792 in France by Claude Chappe, and was popular in the late eighteenth to early nineteenth centuries.[1][2][3] Lines of relay towers with a semaphore rig at the top were built within line-of-sight of each other, at separations of 5–20 miles (8.0–32.2 km). Operators at each tower would watch the neighboring tower through a spyglass, and when the semaphore arms began to move spelling out a message, they would pass the message on to the next tower. This system was much faster than post riders for conveying a message over long distances, and also had cheaper long-term operating costs, once constructed. Semaphore lines were a precursor of the electrical telegraph, which would replace them half a century later, and would also be cheaper, faster, and more private. The line-of-sight distance between relay stations was limited by geography and weather, and prevented the optical telegraph from crossing wide expanses of water, unless a convenient island could be used for a relay station. Modern derivatives of the semaphore system include flag semaphore (a flag relay system) and the heliograph (optical telegraphy using mirror-directed sunlight reflections). 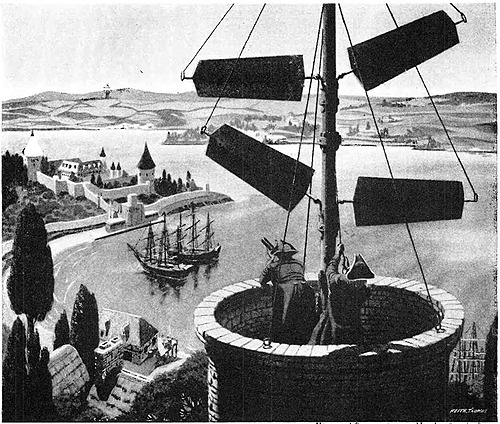 Pneumatic transportation was invented by William Murdoch around 1799.[citation needed] It was considered little more than a novelty until the invention of the capsule in 1836.[citation needed] The Victorians were the first to use capsule pipelines to transmit telegrams, to nearby buildings from telegraph stations. The system is known as pneumatic dispatch.[3]

In 1854 Josiah Latimer Clark was issued a patent "for conveying letters or parcels between places by the pressure of air and vacuum." In 1853 he installed a 220-yard (200 m) pneumatic system between the London Stock Exchange in Threadneedle Street, London, and the offices of the Electric Telegraph Company in Lothbury.[3] The Electric Telegraph Company used the system to acquire stock prices and other financial information to pass to subscribers of their service over their telegraph wires. The advantage of the pneumatic system was that without it the company would have had to employ runners to carry messages between the two buildings, or else employ trained telegraph operators within the Stock Exchange. In the mid-1860s, the company installed similar systems to local stock exchanges in Liverpool, Birmingham, and Manchester.[4] After the telegraphs were nationalised in Britain, the pneumatic system continued to be expanded under Post Office Telegraphs. By 1880 there were over 21 miles of tube in London.[5] A tube was laid between the Aberdeen fish market office and the head post office to facilitate the rapid sale of a very perishable commodity.[6]

While they are commonly used for small parcels and documents–including as cash carriers at banks or supermarkets[7]–they were originally proposed in the early 19th century for transport of heavy freight. It was once envisaged that networks of these massive tubes might be used to transport people.

The technology is still used on a smaller scale. While its use for communicating information has been superseded, pneumatic tubes are widely used for transporting small objects, where convenience and speed in a local environment are important. In the United States, drive-up banks often use pneumatic tubes to transport cash and documents between cars and tellers.Until it closed in early 2011, a McDonald's in Edina, Minnesota claimed to be the "World's Only Pneumatic Air Drive-Thru," sending food from their strip-mall location to a drive-through in the middle of a parking lot. 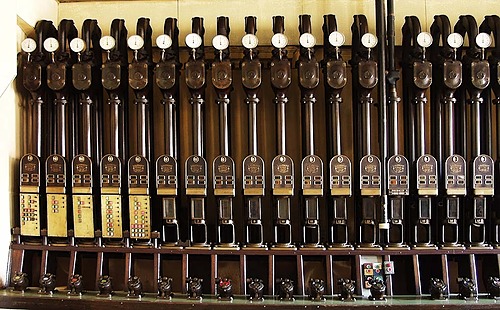 The Telephone Network Is Born

Bell patented his device on March 7, 1876, and the device quickly began to spread. By 1877, construction of the first regular telephone line from Boston to Somerville, Massachusetts, had been completed. By the end of 1880, there were 47,900 telephones in the United States. The following year, telephone service between Boston and Providence, Rhode Island, had been established. Service between New York and Chicago started in 1892, and between New York and Boston in 1894. Transcontinental service began in 1915.
*1889- In 1889, Kansas City undertaker Almon B. Strowger invented a switch that could connect one line to any of 100 lines by using relays and sliders.
Pay Phones
In 1889, the coin-operated telephone was patented by William Gray of Hartford, ConnecticutGray's pay phone was first installed and used in the Hartford Bank. Unlike pay phones today, users of Gray's phone paid after they had finished their call..
*March 11,1891-for the first automatic telephone exchange. The first exchange using the Strowger switch was opened in La Porte, Indiana, in 1892. Initially, subscribers had a button on their telephone to produce the required number of pulses by tapping. An associate of Strowgers' invented the rotary dial in 1896, replacing the button. In
Touch-Tone Phones
Researchers at Western Electric, AT&T's manufacturing subsidiary, had experimented with using tones rather than pulses to trigger telephone connections since the early 1940s
1963-But it wasn't until 1963 that dual-tone multifrequency signaling, which uses the same frequency as speech, was commercially viable. Motorola introduced the first hand-held cellular phone in 1973. 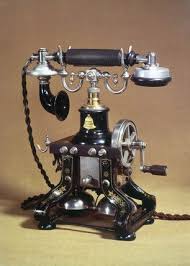 Guglielmo Marconi: an Italian inventor, proved the feasibility of radio communication. He sent and received his first radio signal in Italy in 1895. By 1899 he flashed the first wireless signal across the English Channel and two years later received the letter "S", telegraphed from England to Newfoundland.

Guglielmo Marconi: an Italian inventor, proved the feasibility of radio communication. He sent and received his first radio signal in Italy in 1895. By 1899 he flashed the first wireless signal across the English Channel and two years later received the letter "S", telegraphed from England to Newfoundland. 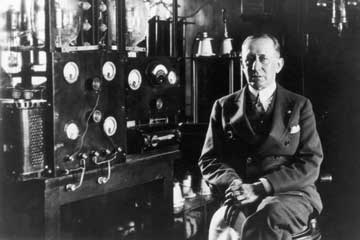 Email is much older than ARPANet or the Internet. It was never invented; it evolved from very simple beginnings.

Early email was just a small advance on what we know these days as a file directory - it just put a message in another user's directory in a spot where they could see it when they logged in. Simple as that. Just like leaving a note on someone's desk.

Probably the first email system of this type was MAILBOX, used at Massachusetts Institute of Technology from 1965. Another early program to send messages on the same computer was called SNDMSG.

Before internetworking began, therefore, email could only be used to send messages to various users of the same computer. Once computers began to talk to each other over networks, however, the problem became a little more complex - We needed to be able to put a message in an envelope and address it. To do this, we needed a means to indicate to whom letters should go that the electronic posties understood - just like the postal system, we needed a way to indicate an address. 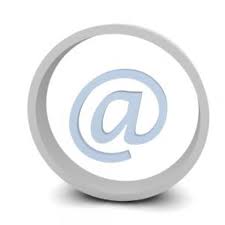 n 1969, the US Department of Defense implemented ARPANET (Advanced Research Projects Agency Network), a network connecting numerous computers across the department for the purpose of communication within the organisation.

On October 29th 1969, the first message was sent from computer to computer on ARPANET. 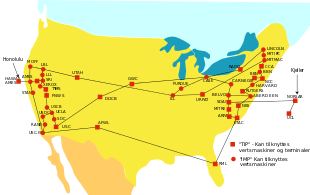 CompuServe was founded in 1969 as Compu-Serv Network, Inc. in Columbus, Ohio, as a subsidiary of Golden United Life Insurance. Their focus was on business customers.[2]
CompuServe (CompuServe Information Service, also known by its initialism CIS) was the first major commercial online service provider in the United States - described in 1994 as "the oldest of the Big Three information services (the others are Prodigy and America Online)
It dominated the field during the 1980s and remained a major influence through the mid-1990s. At its peak in the early 1990s, CIS was known for its online chat system, message forums covering a variety of topics, extensive software libraries for most computer platforms, and a series of popular online games, notably MegaWars III and Island of Kesmai. It also was known for its introduction of the GIF format for pictures, and as a GIF exchange mechanism.
In 1997, 17 years after H & R Block had acquired CIS, the parent announced its desire to sell the company. A complex deal was worked out with WorldCom acting as a broker, resulting in CIS being sold to AOL.
In 2015 Verizon acquired AOL, including its CompuServe division. In 2017 after Verizon completed its acquisition of Yahoo, CompuServe became part of Verizon's newly formed Oath Inc. subsidiary.

The first public dial-up BBS was developed by Ward Christensen and Randy Suess. According to an early interview, when Chicago was snowed under during the Great Blizzard of 1978, the two began preliminary work on the Computerized Bulletin Board System, or CBBS. The system came into existence largely through a fortuitous combination of Christensen having a spare S-100 bus computer and an early Hayes internal modem, and Suess's insistence that the machine be placed at his house in Chicago where it would be a local phone call to millions of users. Christensen patterned the system after the cork board his local computer club used to post information like "need a ride". CBBS officially went online on 16 February 1978.[4][5] CBBS, which kept a count of callers, reportedly connected 253,301 callers before it was finally retired.

BBS(Bulletin Board System)-Bulletin Board System or BBS (once called Computer Bulletin Board Service, CBBSs a computer server running software that allows users to connect to the system using a terminal program. Once logged in, the user can perform functions such as uploading and downloading software and data, reading news and bulletins, and exchanging messages with other users through public message boards and sometimes via direct chatting. In the early 1980s, message networks such as FidoNet sprung up to provide services such as NetMail, which is similar to emai 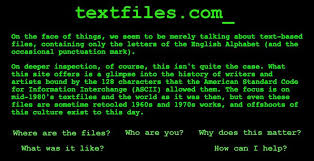