in the advent of the United States of America, former colonies were now evolving into states, adopting the U.S Constitution. Religiuos people such as Jews, Catholics, Quakers and many more heretics were prohibited from holding office and from voting. As the years progressed two states, South Carolina and Delaware, adopted their Constitutions' stating that no man should be denied the opportunity to office because of their faith. Delaware states that upon entering office, the person must make a declaration: Professing their faith in God and acknowledging the holy scriptures.
By 1778 the new United States Constitution was adopted, and specifically in Article 6, Religious Restrictions were prohibited.

States such as New Hampshire, New York, New Jersey and Massachusetts that previously passed the law that allowed women to vote, but revoked it. The reason behind this was primarily because this led to more frauds in voting. There were instances in which men dressed as women in order to vote twice. The government felt that by taking always a women's right to vote, it would narrow the requirements for voting therefore there would be less fraud involved.

Suffragists Elizabeth Stanton and Lucretia Mott, were the head of the fist women's convention held in Seneca, New York. 300 men and women attended this poorly publicized convention. Their goals were to protest the way women were mistreated in the political,economic and social society in the United States of America. During the convention, The Delcaation of Sentiments and Resolutions was issued. It was modeled after the The Declaration of Independence. In this Declaration, women demanded that they be given the same rights men had, including the right to vote. They also included the complaints and situations in which men hurt women. 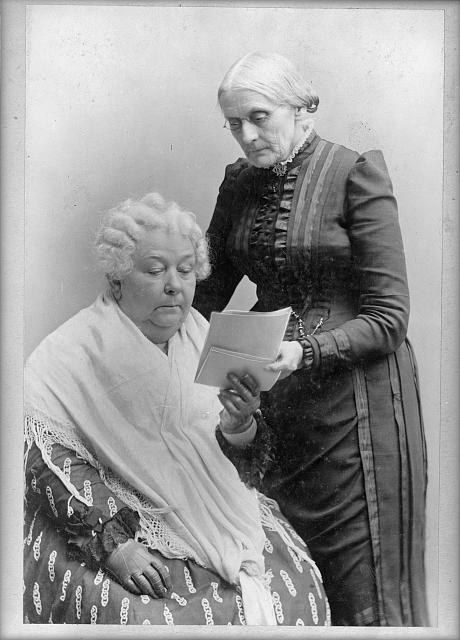 The method of Reign of Terror was presented by many separatists during the mid to late 1800's the Ku Klux Klan (KKK) formed. This was a white supremacist organization that had a strong hate for the African American community and their advancement in social, political and economic lives. The KKK was a very big struggle for the black community. This group was very strong around the Reconstruction era when many African Americans were enrolling into schools and holding political office. African Americans were constantly harassed, threatened and attacked by the Klan members. They used terror and violence to scare African Americans away from power. Nearing the end of the reconstruction era, less and less African Americans were gaining education and power, as a result the KKK began to fade away.
This organization rose again when the Civil Rights Movement began, and people were protesting segregation. The KKK began mobs, continued to kill African Americans, they hurt whites involved in interracial organizations. A well-known tragedy is the bombing of the 16th St. Baptist Church, in which many Klan men bombed the church killing 4 little girls attending Sunday school. As the Civil Rights Movement began reaching it's climax the hatred rose from within the KKK. The were desperate to keep their superiority and their power.

The 15th amendment in the U.S Constitution gave African American men the right to vote. It declared that no U.S citizen could be denied of their rights by the United States or any state, because of their skin color or race. The amendment did not take full affect until a hundred years later due to poll taxes and literacy tests. Though the 15th amendment was clearly stated in the Constitution, Southern states were effective in disenfranchising African Americans.
This amendment was not fully enforced until the Voting Rights Act was passed in 1965.

By the end of the Reconstruction era, the 15th amendment was being abandoned. The 15th amendment stated that all citizens, regardless of race and skin color cannot be denied the right to vote. During this period, the whites were trying to regain their political, social and economic power from the black that began to advance during the Reconstruction Era. There were four methods of redeeming white supremacy, two of them focused mainly on the voting rights of African Americans. There was Poll taxes, Segregation Laws, 'Reign of Terror', and Legal disenfranchisement.
The majority of African Americans were poor because of the short transition from slavery to a new life. They lived in the ghettos in filthy homes and not-so decent jobs. Poll taxes when it came to voting affected them greatly because the prices were high and they had to be payed in cash. Many African Americans could not afford to pay the poll taxes. Another method was Legal disenfranchisement, these were methods that intended to render ineffective the 15th amendment. Literacy tests fell under this method, because the majority of African Americans could read or write and were not educated, registering to vote was made virtually impossible for them trough the tests that were put.

During the early 1800's women were fighting and struggling to obtain the right to vote, along with many other civil rights.The organized petitions, marches, meetings, and picketed their way to the 19th amendment. This fight lasted for a very long
time.After the 72-year struggle women were granted the right to vote through this amendment.
The 19th amendment passed in 1920 but from 1890 leading up to 1920, many states including Wyoming, Utah, Colorado, Idaho, California and Washington were the first states that began to extend a women's right to vote. This set lead for many other states to follow and grant women's voting right.

The Civil Rights Movement demanded voting rights, along with many other constitutional rights, for African Americans. This included protest, marching, petitions, sit-ins and many other different methods from African Americans. They defied segregation laws with sit-ins, many African Americans, and a number of whites sat in lunch counters and other public accommodation that were reserved for Whites Only. The most common method was 'Non-violence'. Many inspirational Civil Rights leaders enforced the non violent fight against the racial discrimination in America.
Groups and organizations such a CORE, SNCC, and SCLC were created with the same goal in mind. Uniting African Americans and training them to protest and fight for their rights. This groups specifically lead on a fight for the ability for African Americans to vote in the United States.

The Voting Rights Act gave more African Americans the ability to vote. It was because of this act that the 15th amendment was enforced. Towards the end of the year 1965, more than 200,000 African Americans were registered voters in the South. The numbers African American registered voters continued to grow. Many of the Southern states have less than 50% of black registered voters.
During this time President Johnson was in office. The issue of Civil Rights was presented in his campaign as a top priority. He outlawed the poll taxes present to the voters in 1964 and two days following 'Bloody Sunday" in Selma, President Johnson sent the bill for the Voting Rights Act to Congress.This Act was signed into law in 1965, and gave federal government the power to monitor any states' voter registrations and eligibility. The Voting Rights Act prohibited discriminatory tests to any voter in all the states and it also allowed non-English speaking voters to vote.