The Growth of The Church

The Roman empire was nothing but, peaceful from conquering political rivals. The empire consisted a range of entertainments like theatres, stadiums, amphitheatres and spectacles.

People were attracted to Christianity because of the message of salvation and the power of love showed towards each other. 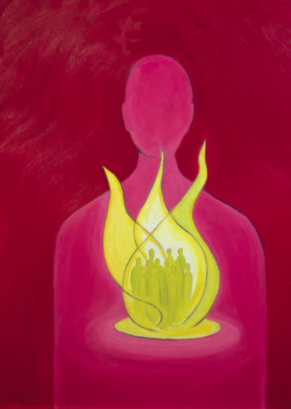 The Church's Growth in Jerusalem

During Pentecost, the Apostles decided to meet up until they heard a sound from the above. Violent wind filled the house and then appeared the tongues of fire that came on their heads. The Apostles were filled with the Holy Spirit.

The Apostles were both excited and shocked on how they were all speaking different languages, but they could understand one another. They asked each other what it meant, but eventually they laughed it off.

They accepted what he said and were baptised. That very day about 3,000 were added to their number.

At the Beautiful Gate of the Temple, there was a crippled man who begged for money from Peter and John. Peter helped the man up to his feet and prayed over him. The crippled man began walking and praising God.

Men of Israel were unaware of what they were doing, so Peter told them to turn to God, repent, so that their sins are completely wiped out.

The Church's expansion beyond Jerusalem

Saint Stephen was the first to die for christian faith. Philip is a good example of conversion. He went to Samaritan and proclaimed the Gospel to the people, he preached and worked miracles as well as cleansed people from unclean spirits.

Saul had a vision of Jesus. While he was travelling to Damascus, a light from Heaven shone at him. He fell to the ground while hearing a voice from above, telling him what to do. A disciple named Ananias, had been ordered by Jesus to retrieve Saul. At first he was hesitant, but proceeded to do as Jesus said. Ananias went and met Saul and returned sight to his eyes, which he had lost when he was struck by the light and filled him with the Holy Spirit.

(46-49AD)
Paul's first journey was through modern Cyprus, Turkey and Syria. He healed a cripple in Lystra and prevented people from thinking he was some kind of god.

(49-53AD)
Paul's second journey was in response to the Holy Spirit through modern Syria, Turkey and Greece, He was imprisoned in Phillipi (during an earthquake), preached to his jailer and family and received them into church.

(53-58AD)
Paul's third journey moved him by the Holy Spirit to preach in new towns/countries he had visited. He preached and taught God's laws in the Jewish place of worship (synagogue).

After Paul was arrested in Jerusalem, the Jewish leaders tried to assassinate him, so the Roman authorities moved him to Caesarea. He was sent off to Rome by a boat and arrived in Malta. In 68AD, he was beheaded. 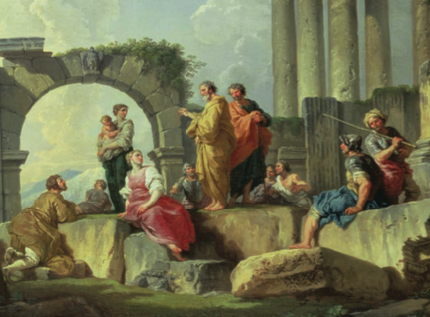 Roman emperors became unhappy with the growth of Christianity, so they officially started persecuting them in 64 AD during the reign at Nero. The most severe persecuting began in the 3rd century. They hated that Christians cared for everyone which the government thought neglected them. It started with Emperor Alexander Severus (222-235 AD) then Emperor Trajan Decius (249-251 AD) and lastly the most terrible persecution, started in 303 AD because of Emperor Diocletian.

(311-313 AD)
Constantine was an Emperor of Western Roman . He saw a cross together, "With this sign, you will conquer". This led him to believe in Christianity.

(325 AD)
The First Ecumenical Council is important because they were the council of the whole church and adopted the Nicene Creed.

Growth of the Church during the period of 'Christendom'

Clovis defeated the ruler of the Northern gaul and later on became the king of all Gallic territory. He became baptised along with 5,000 men and continued to conquer.

Pope St Gregory 1 was a pope who gave new impetus to the conversion of the rulers of Europe. He was a monk who set out other monks to establish monasteries.

Charlemagne was a king who ruled over most of the Western Europe.

The story of Christendom is about a church suffering at the hands of military conquerors, whilst spreading the Gospel as followers of Christ. Military conquerors were converted starting with Clovis, who stopped persecuting. Christianity began to spread worldwide but, the orthodox church hated it and it caused tension between the two churches, theologically, politically and more. 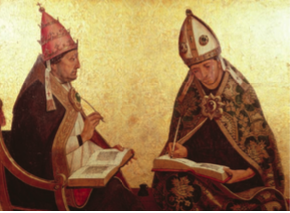 The Church's Growth beyond Europe

In the second millennium, the Holy Spirit guided Christ's followers to carry the good news beyond Europe to new communities.

The United States (1511)
Three diocese were established in North America. The earliest missionaries in America were Jesuits, Franciscans, and Capuchins. The influence of these missions extended from Florida to California in the modern United States. Their job was to proclaim the Gospel to Native American Indians.

Asia (1542)
Began with the arrival of the Portuguese in India. In 1542, one of the famous missionaries St Francis Xavier began to preach, baptise and convert a large number of people.

Japan (1549)
In 1549, St Francis Xavier landed at Kagoshima and the mission he flourished. In 1855, missionaries noticed a group of Japanese showing devotion in the mission chapel in Nagasaki. They were descendants of persecuted Catholics in 1638. They managed to keep their faith for 2 centuries without a priest. In 1945, around 8,500 Catholics were killed by the atomic bomb over Nagasaki.

China (1552)
In 1552, St Francis Xavier passed away on his journey to China. During 1581, there was a clash between Christianity and Chinese culture which became a major deterrent to the missionaries. Unfortunately, in the 19th century, colonial powers had invaded China, so Chinese culture/ traditions were torn apart. This made the Chinese culture grow weaker, so Christianity grew rapidly, having almost 2 million Catholics by 1922.

Africa (1868)
Society of missionaries of Africa or White Fathers was founded. Missionaries in Uganda (severe hardships and danger). The church in north, east and west Africa expanded with millions of new church members over the 20th century. Today, African churches are led by African bishops, priests and laity.

Australia (1788 - 1920)
The church began in 1788. There were no priests to lead the people, so they kept their faith. Priests arrived in 1820 to minister the Catholics, while the sisters set up communities to work with people. 1 in 5 Australians were affiliated with the Catholic church. 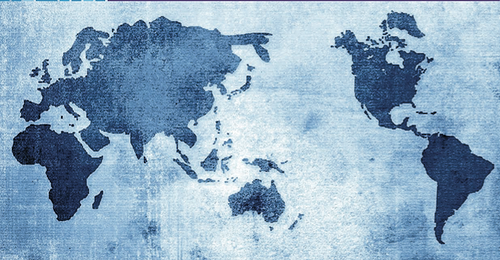