Over this period of time France was financially supporting the Americans in their revolution and they were in three different wars themselves. Also, King Louis XVI and his wife Marie Antoinette were spending money for their own uses. This caused a problem because they were in a lot of debt and they couldn't support their country financially. This differenciated from the Declaration of Rights because the people didn't have access to the taxes like the king and queen did, making it unfair and making the rights unequal.

Meeting of the Estates General

King Louis 16 needed to increase taxes but could not without appoval of the Estates General. They conveined on this date. This meeting was in favor of the Declaration of the Rights of Men because it was showing Representative government, but on the other hand it is against it because it's not right for the Third Estate to pay more for land.

Creation of the National Assembly

It was the assembly of representatives of the Third Estate during the French Revolution where they discussed general financial restructuring and other things that had to do with the Revolution. This does agree with the Declaration of the Rights of Man because they feel the taxes aren't equal and they have the right to say and try to change it when their rights are being threatened.

It was an Oath signed by 575 of the Third Estate members and they were locked out of the court house so they had the meet the meeting on a tennis court. The oath of the National Assembly was to make it clear that they wouldn't back down and will go against the king. Declared themselves the supreme state power. This agrees with the Declaration of the Rights of Men because they were trying to get rid of the monarchy and the king because they weren't given the same rights as Second Estate or First.

Panic and riots broke out among the peasants because of rumors of aristocrastic conspiracy by the king. It's agains the Declaration of the Rights of Man because people were getting executed for their beliefs. 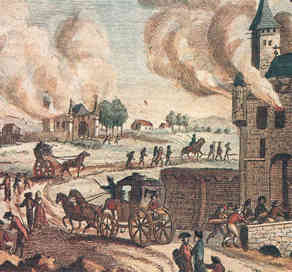 Declaration of the Rights of Man and Citizen

The National Assembly felt that the neglect or contempt is the cause for the corruption of government so they created the Declaration of the Rights of Men to end the abuse from the government. Therefore because they are trying to overthrow or go against their rules and receive rights it agrees with this document. King Louis XVI was executed because he was tried for high reason and was found guilty. He was the first victim of the terror, and was killed by a guillotine. This agrees with the documents because in order for someone to go to jail they have to commit a crime in which the king did by spending the people's money for his own enjoyment.
http://www.historyguide.org/images/jan21_1793.jpg

This was designed to fight the enemies of the Frech Revolution, so that there wouldn't be counterrevolution to go and fight against the revolutionary government. The guillotine was used to kill any of those who spoke against revolution. They used fear to keep everyone together. This disagrees with the documents because innocent people were killed.
http://jspivey.wikispaces.com/file/view/RT.gif/31495785/424x312/RT.gif

Important Actions of the National Convention

The populace of Paris demanded the monarchs to be abolished and they suspended King Louis XVI which helped to form the constitution. It was also decided that instead of having Frenchman 25 and older to elect the deputies, that they could be 21 years old. Implementation of the constitution was postponed due to the wars and French Revolution. This agrees with the documents due to the fact that they wanted to abolish a monarchy.

Napoleon was a French military leader and emperor who conquered much of Europe. He was the First Consul with 5 years in the State Senate. This man's rise to power agrees with the documents because the rights were protected by him.
http://www.biography.com/imported/images/Biography/Images/Profiles/N/Napoleon-i-9420291-2-402.jpg

Napoleon formed different reforms while he was at his peak in power. A couple of the reforms that he developed included education, the Napoleonic Code (which influenced many other countries in Europe), government reforms, and reforms with the law. This agrees with the documents because it doesn't go against what any of the people were writing about.

This was the turning point in Napoleonic Wars where it decreased the French. It brought the war of the Sixth Coalition where Prussia and the Austrian Empire broke the alliance with France. Napoleon the emperor of France is banished to the Mediterranean island of Elba following his abdication at Fontainebleau. This goes against the documents because the right of freedom for him is no longer there since he was banished.

The Congress of Vienna developed laws that followed a fair policy that included no great rewards, but also no great punishments. The balanced settlement ensured that there would be no major conflict for 40 years. This congress also restored monarchies across Europe. This goes for and against the documents because of the fact that these people got to experience their own rights, but disagrees in that they restored monarchies across Europe. This battle took place south of Brussels in Belgium. It was the battle of the British, Belgians, Dutch, Germans and Russians against the French Grande Armee. In the end the British, Belgian, Dutch, German, and Russian side won. This battle was fought because other European nations started worrying that Napoleon would be strong against their countries after his reign in France. This act goes against the documents because they used violence instead of words.
http://www.britishbattles.com/waterloo/images/battle-waterloo.jpg