Peasants were having a difficult time to provide food for their family which in turn made it difficult to pay off debts. If the peasants couldn't pay for anything then it snowball effected into everyone's lives.

http://alphahistory.com/frenchrevolution/wp-content/uploads/2012/11/Est.gen_.2.jpeg
The act of having a different assembly for each state. The estates general was assigned from the estates to have a say in what happens to the country, people, and estates. There were three states/estates in France. The being of the three estates crossed the line of equality because they were not treated fairly. In the use of these estates people were not allowed to pursue liberty, property, safety and resistance to oppression. They saw this as unfair and sparked the revolution. 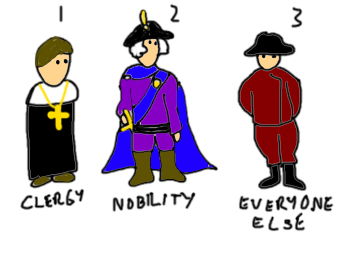 A month after the estates-general met at Versailles, the members of the third estate declared themselves as the national assembly. They took the monarchy powers in the way of what they do of taxation and decided to frame a constitution restricting the powers of the king. Therefore the power and the direction of the country would not be determined by one but by many.
http://thinkprogress.org/wp-content/uploads/2013/02/French-National-Assembly.jpg

The Oath was a pledge signed by 576 of the 577 members from the Third Estate who were locked out of a meeting of the Estates-General on 20 June 1789. They made a makeshift conference on an indoor tennis court and decided what they wanted to change. The deputies of the tennis court pledged/agreed that they would keep meeting until the constitution was created.

http://0.tqn.com/d/europeanhistory/1/0/B/J/HultonArchiveStormingBastille2.jpg
A mob marched to the Bastille, looking for gunpowder and prisoners that had been taken by King Louis. The mob called to the guy in charge of the Bastille to lower the bridge but he wouldn't and tried to bargain with 20,000 pounds of gunpowder and if they wouldn't accept it he would blow up the entire fortress. The mob advanced and is now known as a bloody battle in France. An assembly that governed the French during the most critical time in the revolution. The National Convention was elected to provide a new constitution for the country after the overthrow of the monarchy. The Convention numbered 749 deputies, including businessmen, tradesmen, and many professional men. Among its early acts were the formal abolition of the monarchy and the establishment of the republic.

Declaration of the Rights of Man and the Citizen

After relentless fighting over if the King can have a trial the convention took on the role of the court. King Louis's defense centered on the unfairness of the trial and how the convention couldn't just take over. Paris was hostile to King Louis and the trial was venomous, traumatic, and dangerous to those who attended. The outcome, at the first vote, was that the 693 deputies present unanimously voted Louis guilty and the call for a referendum was rejected by 424 to 283. The death penalty was carried 387 to 334. The process spread over five days and eventually King Louis was taken to the guillotine. The period of violence that broke out after the onset of the revolution. Everyone was killing everyone. People claimed that others were enemies of the revolution and therefore reported them (sort of like our Salem Witch trials). The death toll ranged in the tens of thousands, with 16,594 executed by guillotine and another 25,000 in summary executions across France. The reign of terror or just the terror was truly a terror to all the people in France.

Napoleon Bonaparte was a French military leader and emperor who conquered much of Europe in the early 19th century. Born on the island of Corsica, Napoleon rapidly rose through the ranks of the military during the French Revolution. After seizing political power in France he crowned himself emperor in 1804. Shrewd, ambitious and a skilled military strategist, Napoleon successfully waged war against various alliances of European nations and expanded his empire. However, after a disastrous French invasion of Russia in 1812, Napoleon abdicated the throne two years later and was exiled to the island of Elba. In 1815, he briefly returned to power in his Hundred Days campaign. After a crushing defeat at the Battle of Waterloo, he abdicated once again and was exiled to the remote island of Saint Helena, where he died at 51.

Directed by Napoleon, because he felt as if they needed to invade Russia because they left the continental system. He led 600,000 French into Russia. When they made it to Russia, instead of Russia fighting back they retreated and destroyed everything that could be of use to the French. The French made it to Russia and found no shelter and so they had to retreat.

Napoleon Bonaparte abdicates the throne and is banished by the Treaty of Fontainebleau and sent to the Mediterranean island of Elba. Even though he was exiled he did eventually come back to try for the throne again.
http://www.xtimeline.com/__UserPic_Large/87241/evt101210001100015.jpg

The Congress of Vienna was a conference of ambassadors of European states chaired by Austrian statesman Klemens Wenzel von Metternich, and held in Vienna. The objective of the Congress was to settle the many issues arising from the French Revolutionary Wars, the Napoleonic Wars, and the dissolution of the Holy Roman Empire. The Battle of Waterloo, which took place in Belgium on June 18, 1815, marked the final defeat of French military leader and emperor Napoleon Bonaparte (1769-1821), who conquered much of continental Europe in the early 19th century. Napoleon rose through the ranks of the French army during the French Revolution (1789-1799), seized control of the French government in 1799 and became emperor in 1804. Through a series of wars, he expanded his empire across western and central Europe. However, a disastrous invasion of Russia in 1812, coupled with other defeats, led to his abdication and exile in 1814. He returned to France in 1815 and briefly resumed power. The Battle of Waterloo, in which Napoleon’s forces were defeated by the British and Prussians, signaled the end of his reign and the end of France’s domination in Europe. After Waterloo, Napoleon abdicated and later died in exile.