The History Of Calculators

There was problem uploading pictures.

The abacus is the first variation of the calculator used in Sumer in between 2000 and 2500 BC.

Same use as the first abacus but with different material. Some parts of Asia still use this or have it combined with the present day calculator. But the abacus in general starting reaching a decline n 1617. 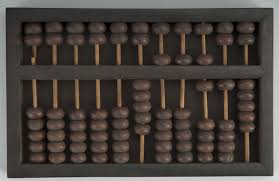 A man named John Napier invents a tool known as Napier's Bones. The “bones” are thin rods that are marked with multiplication tables. You use it to determine a number's sum by changing the vertical alignment of the rods and horizontally reading the multiplication tables. These are close to calculators but are more of just mental work.

This is the first mechanical calculator. It was made by a man named Blaise Pascal. It allowed multiple carries and you didn't actually need to do anything but type in the numbers. There was less 50 prototypes. It also known as the arithmetic machine or Pascaline. It is still in museums but not used. It was eventually imitated by Gottfried Leibniz.

The Leibniz wheel was created by Gottfried Leibniz. It was a improved versions of Pascal's calculator and had automatic multiplication features. It was cylinder in design and had a set of teeth in incremental lengths. Leibniz tried to make his own calculator called "The Stepped Reckoner" but it was never mass produced. Though Leibniz wheel wasn't a complete calculator, it was later worked on by Thomas de Colmar.

Created by Thomas de Comar, the arthimometer was inspired off of Leibniz Wheel but with different features. It was capable of adding and subtracting two numbers directly. It could also perform long multiplications and divisions by using a movable accumulator. It was patented in 1820 but produced in 1851. It was the first mass produced calculator and started the dependence of calculators.

The Grant Mechanical Calculating Machine was built in 1877. More famously, the P100 Burroughs Adding Machine developed by William Seward Burroughs was built in 1886. This machine had a lot of progress for the Burroughs and made their family very wealthy. So much his grandson, William S. Burroughs, lived a carefree lifestyle and wrote several novels including "The Naked Lunch". In 1887, Dorr E. Felt builds his Comptometer which introduces button-pressing to calculators. It was more efficient and because numbers could be put in simultaneously, it was faster than the electronic calculators now since you have t enter them individually. In the 1940's, the Curta Calculator was built by Curt Herzstark. It was the first, last, and only mechanical handheld calculator. it was small and cylinder. It fit perfectly into pockets. Herzstark had much success from this. It cost $125 and $175 dollars and today sell for anywhere between $1000 and $2000 depending on the condition and model. In the 1960's it was used to make quick calculations in rally cars and cockpits.

The Start Of Electronic Calculators

The all-electronic computer called "Colossus" is built. it isn't for calculations. It is for performing XOR Boolean algorithms.This used during World War II for code-breaking. In 1646 the ENIAC (Electronic Numerical Integrator And Computer) was built. it could solve a large number of numerical problems including the four basic arithmetical functions. It worked 1,000 times faster than any other electro-mechanical computer and could hold up to ten digit decimals in number. It was 27 tonnes and took up a lot of space and power.

ANITA (A New Inspiration To Arithmetic Accounting) was the first ever all-electronic desktop. It developed by a British company. It came with an electric calculator and sold tens of thousands. It electronically used vacuums and cold cathode "Dekatron" counting tubes. they were sold for £355 ($1,000), which is around to £4,800 ($8,000) in today's money. it was challenged by the American Friden 130 series, the Italian IME 84, and the Sharp Compet CS10A from Japan. None were better or cheaper.

"Toscal" BC-1411 calculator was made. It used an early form of Random Access Memory (RAM) built from separate circuit boards. Olivetti Programma 101 was made in 1965. It won various awards. Since it was a desktop electronic calculating machine that was programmable by non-specialists for individual use, it can be classified as the first personal computer. It added square roots to calculators. It weighed around 8kg but costed more than a family car. In 1967, Texas Instruments release a "Cal Tech" prototype. The "Cal Tech" could add, multiply, subtract, and divide, and print results to a paper tape while being compact enough to be held in the hand. This was the start of a new chapter in calculator history. In 1969, Japan released the Sharp's QT-8D Micro Compet. It used four Rockwell chips which equals about 900 transmitters. One chip was to power the green fluorescent display, the second chip was to control decimal point, the third chip was to handle digital addition and register input control and the fourth chip was to process arithmetic and provide registers. It is very primitive for todays' standards and replaced by the QT-8B which replaced the AC power supply circuitry with rechargeable cells, allowing it to be battery powered and completely portable. . Within a year 'handeld' calculators started to take off with machines like he Sharp EL-8, Canon Pocketronic and Sanyo ICC-0081 Mini Calculator. They sold well but were more than $2,000 in todays' money. The same year (1970), a Japanese company called Busicom released their Junior desktop model that boasted the first 'calculator on a chip' called the Mostek MK6010. The Mostek MK6010 combined all four functions plus decimal point and display on one 4.6mm-square chip. Soon many calculators of different types were invented. Each adding new things. For example, the HP-35 was an almost pocket-sized calculator with trigonometric and algebraic functions. They all led up to today's calculators. Calculators started becoming on phones and computers and tablets. There will probably be different thigns in store for the calculator. 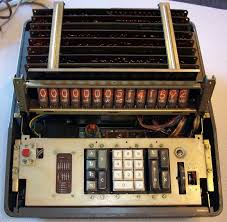