Timeline Of The Evolution Of The Atomic Theory

He made the first theory that all matter is made up of tiny particles that are invisible called atom. 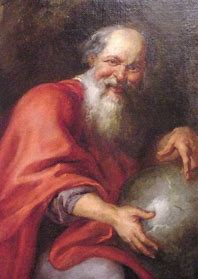 He did not believe in matter. He believe in the four elements of air, water, fire, and earth. He also believed that matter will always be able to be cut in half 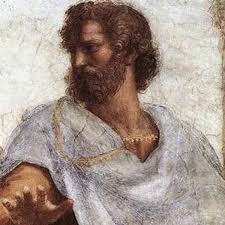 An English chemist, Dalton created a scientific theory based off of and including Democritus atom idea: All elements are created from indestructible particles called atoms which are different from other elements atoms. Atoms are the same in the same elements though. His theory also introduced compounds, which are made when different elements are joined, separated, or rearranged chemical reactions result. 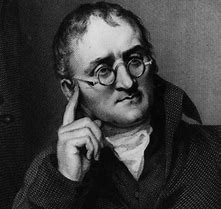 Eugen Goldstein discovered that cathode-ray tubes with a perforated cathode emit a glow from the end of the tube near the cathode. Goldstein concluded that in addition to the electrons, or cathode rays, that travel from the negatively charged cathode toward the positively charged anode, there is another ray that travels in the opposite direction, from the anode toward the cathode. Because these rays pass through the holes, or channels, in the cathode, Goldstein called them canal rays. Goldstein was the first to discover the proton.

J.J. Thomson discovered the negatively charged particle called electron in 1897. The discovery of the electron was done through the cathode ray tube experiment. (Cathode ray tube is a vacuum tube). J.J. Thomson believed that the electron was two thousand times lighter than that of a proton and assumed that the atom contains thousands of electrons that possess the negative charge. In this experiment, he basically considered that the atom has clouds of negative charge and positive charge. He demonstrated the process of ionization of the air by X-rays along with Rutherford. His atomic model is also known as the plum pudding model. Thomson’s discoveries upended the prevailing theory that the atom was the smallest fundamental unit. 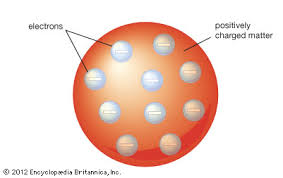 Ernest Rutherford proposed that an atom is composed of empty space mostly with electrons orbiting in a set, predictable paths around fixed, positively charged nucleus. Rutherford conducted an experiment where he bombarded α-particles in a thin sheet of gold. In this experiment, he studied the trajectory of the α-particles after interaction with the thin sheet of gold. On the basis of his observations made during the experiment, Rutherford concluded that major space in an atom in empty, the positive charge in an atom is not distributed uniformly, and very few α-particles had deflected at large angles or deflected back. Rutherford’s explanation of the structure of the atom and experimental results helped to form the basis of the quantum mechanics. 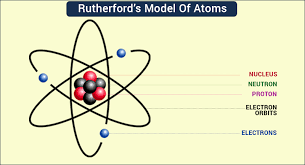 Niels Bohr, a Danish physicist developed the Bohr model. The Bohr model shows the atom as a small, positively charged nucleus surrounded by orbiting electrons. Bohr was the first to discover that electrons travel in separate orbits around the nucleus and that the number of electrons in the outer orbit determines the properties of an element. The chemical element bohrium (Bh), No. 107 on the periodic table of elements, is named for him. 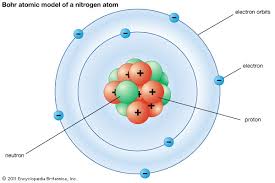 Louis de Broglie, a French physicist introduced his theory of particle wave duality. At the time, the wave and particle interpretations of light and matter were seen as being odds with one another. De Broglie suggested that these seemingly different characteristics were instead the same behavior observed from different perspectives, that particles can behave like waves, and waves can behave like particles. This theory became known as the Wave Particle Duality or De Broglie Hypothesis. Louis de Broglie based his theory off of research. Louis De Broglie proved why the Bohr model was successful with atoms or ions that contained one electron. 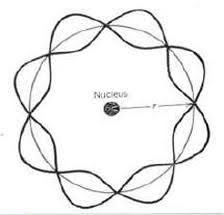 James Chadwick discovered the neutron in atoms. Chadwick bombarded beryllium atoms with alpha particles. An unknown radiation was produced. Chadwick interpreted this radiation as being composed of particles with a neutral electrical charge and the approximate mass of a proton. He concluded that neutrons are located in the center of an atom, in the nucleus along with the protons. They have neither a positive nor negative charge, but contribute the the atomic weight with the same effect as a proton. Chadwick’s findings were pivotal to the discovery of nuclear fission, and ultimately the development of the atomic bomb. 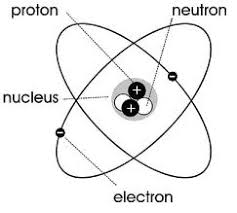 Erwin Schrödinger used mathematical equations to describe the likelihood of finding an electron in a certain position. This atomic model is known as the quantum mechanical model of the atom. The atomic model predicts the odds of the location of the electron. This model can be portrayed as a nucleus surrounded by an electron cloud. Where the cloud is most dense, the probability of finding the electron is greatest, and conversely, the electron is less likely to be in a less dense area of the cloud. Thus, this model introduced the concept of sub-energy levels. Schrödinger concluded that electrons are constantly moving and cannot be given a definite position within the atom. They are given probable regions and are called Atomic Orbitals. They orbit the nucleus in the same pattern every time, like the planets orbit the sun. 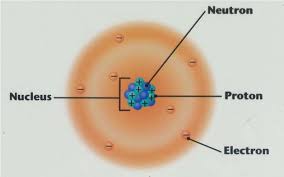