Long before the white man arrive, there were people living off of the land in America. They were the Native Americans. These indigenous people had simple lives with farming, hunting, and tribes. They had a special attachment to nature, and even had their own types of "religion" based around them. Each tribe had a different type of story to tell. It was a very interesting time in America, and quite possibly the most peaceful. 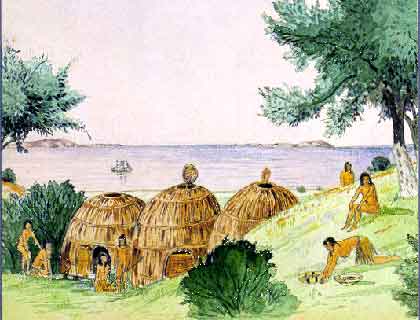 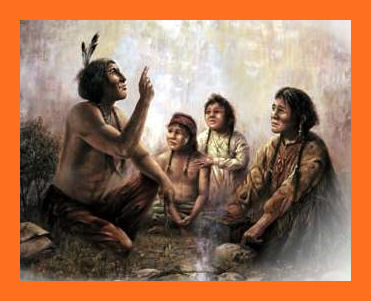 Native American stories are a very interesting topic, and have a lot of meaning for being just called "stories."
(Literary Work 1 of Unit 1)
An example of these "stories" is "The World on the Turtle's Back" by the Iriquois tribe.
"The World on the Turtle's Back" is a "creation of our world" story. A woman craves the bark of the tree nobody is supposed to have anything from, and then the tree is cut for that slice of bark, causing the tree to fall down below... Along with the woman. A turtle, who is sitting atop the deep abyss of an ocean, demands his friends to gather as much soil and everything, so the tree lands on him, and can still grow. His plan succeeds, and the tree and woman now live on the turtle. The woman, however, is pregnant, and gives birth to a girl who later births two twins. The twins were polar opposites who can create whatever they please in most senses. They keep trying to beat each other in various different games until the right-handed twin wins, and sends his left-handed twin down to an area below this world that is deemed by most other religions as hell. 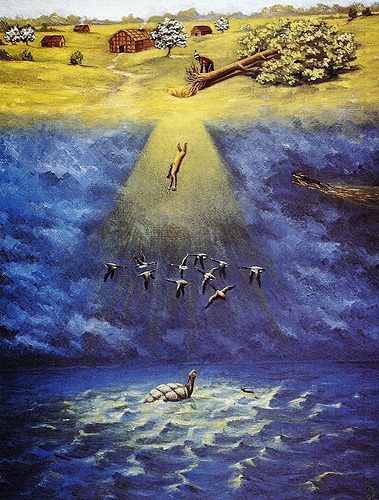 The Puritans Arrive In Plymouth

The Puritans, an extremely religious group that was actually ridiculed in England arrived on the grounds of America in Plymouth, MA.
Puritans were christian, but not like Church of England or Roman Catholic christian. They only allowed stuff that was in the bible to be practiced. There was no extras added or anything. It was all simple life with the simple technology, like the Amish today, but in the 1600s.
Their writings were simple, and "Plain." Most of it was a inspired by religious belief and their normal cultural values. The writing was in the simplest form of the time, where they just wrote sentences in the common language. They also were big of poetry, and wrote simple poems. Most of the writing they did had their religion and culture put into it. While it sounds odd, it's a rather interesting thing to be doing. 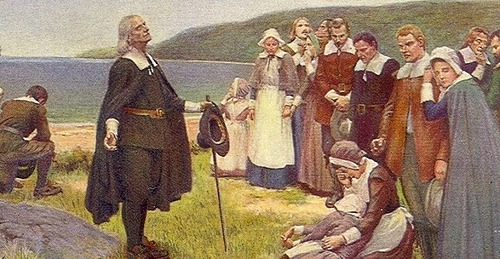 Puritanism and The Crucible

This is the period of time in America where the Puritans were the main focus. The Salem Witch Trials is certainly event everyone should know about that occurred during this time period. The reason behind why this event happened was mostly due to Puritan beliefs and the bible stating that witches worked willingly with the Devil himself to bring pain upon others. Witches who admitted to "being a witch" were only spared because it gave them a "second chance."
During this time period, a lot of Puritan (Plain) writings came out. Most were just poetry and historical pieces.

(The Crucible is within its own confinement, and is to not be confused for being literature FROM the Puritanism time. It's just here because it slides straight into it from puritanism, and space was a crucial issue when creating this timeline)
"The Crucible" by Arthur Miller
While written during the 1950s, the story itself takes place in 1692-93, most notably during the Salem Witch Trials. As stated earlier, these trials were very deadly for the convicted, for most of them did not really confess to being a witch, due to them thinking they would be damned after death. It was a pretty scary time, and the story really gathers that fear in the characters and overall realistic setting. 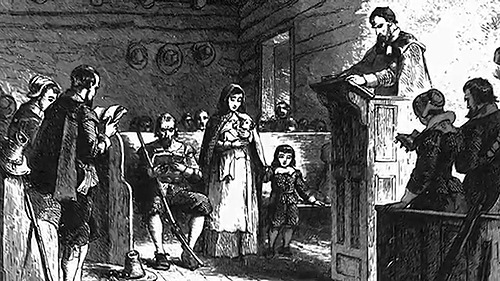 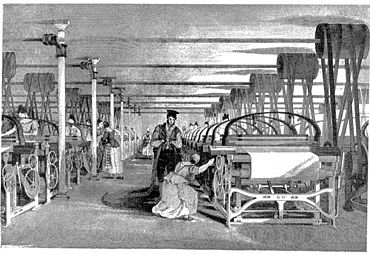 The event that occurred during Romanticism that brought the USA onto its own feet as a country in itself. The signing of the Declaration was the true start of the actual Revolution and when Britain started losing their grip on the colonies. 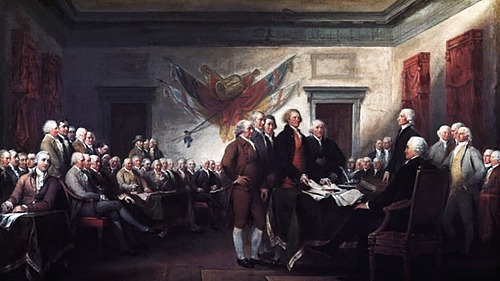 After the Puritans and America aged a bit, writers were more imaginative and thought about what they could possibly do with their writing.
Their writings actually had quite a few characteristics in general. They had an interest in the common man and childhood, strong senses, emotions, and feelings, an awe of nature, celebration of the individual, and importance of imagination. That allowed for them to make their stories pretty creative and influential for their time.

The Main Literary Piece of the Romantics that we learned about was "The Devil and Tom Walker," which was a Romantic story about Tom Walker, and how he basically makes a deal with the Devil, and tries to evade him, but fails and gets taken away to the forest one dark and stormy day.

Transcendentalism happened around the same time and took on just about all of the romantic ideas.

One of the several Literary Authors during Transcendentalism was Ralph Waldo Emerson, who wrote several poems that focused around nature and the human interaction with it. One his his poems, "from Nature," showed how he found Nature exhilarating, and how it kept you feeling young. It was a very nice time in America. People were not necessarily at each other's throats about writings and everything else. 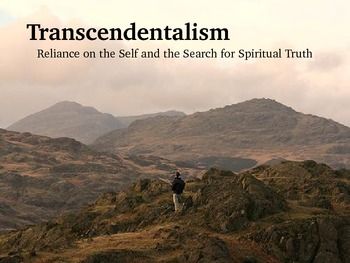 American Realism lasted from around when the Civil War began, and the late 1900s century, which is why my estimation ends in the 1950s.

Event 1: Lincoln's Election
On November 6, 1860, Abraham Lincoln won the election of 1860. This was actually one of the reason the South left the USA to form the Confederacy. They really did not like Abraham Lincoln, someone who supported abolitionists, becoming their leader.

Event 2: The American Civil War
From 1861 to 1865 the Civil War was a war between the North and South parts of the USA... The Union and Confederacy, to be exact. It was a four-year war that struck people with the real tragedy of what war was, which sparked Realism to hit it big. Ending on April 9, 1865 in the Appomattox Courthouse, the Civil War was pretty brutal for the country and absolutely devastated the condition of the South.

American Realism was a the period of American Literature that expressed personal experiences, large audiences, and realistic fiction. The stories were more believable than the past. They were all focused on the pains that everyone goes through every day. That is what Realism was.

Literary Work 1: "I Hear America Singing" by Walt Whitman
Walt Whitman was a major writer during Realism whose style was far from being that of traditional poets. He used rhymes that barely rhymed with each other, but still fit, and did not use the traditional layout. The poem "I Hear America Singing," is about various people singing their songs while working. The songs seem to represent their work, because they all have specific tunes you'd hear to that type of job. The poem seems to represent just America at work, and the individuals singing and their variety in personality. It's quite a beautiful thing to hear. 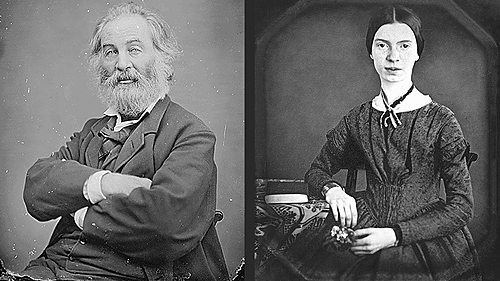 The Beginning of Modernism (Of Mice and Men)

Event 1: The Great Depression
The Great Depression took place during the time period of 1929 and 1939. It has been labeled as the worst economic crash in the history of our industrialized world. The reason it started was because the stock market crashed in October of 1929. Why the market crashing was a big deal derives from the fact that everyone let their money get to their heads and they bought credit after credit after credit and put it all into the stock market to make even more money. That is what caused everyone to fall at the lowest point in society. Homelessness was high, joblessness was also high, and it was literally the most depressing time to live in for society itself.

Event 2: World War I
Taking place from 1914 to 1918, World War 1, known to those unaware a second would happen as The Great War, was a major conflict across the globe that caused massive death tolls and battles to strike out in predominantly Europe. The USA tried their best to not get involved, but the striking of the Lusitania by Germany caused President Woodrow Wilson to declare war against Germany, therefore putting us into the war.

Bonus Event 3: World War II
Taking place from 1939 to 1945, World War II was the surprise second coming of the world being at war... Also in Europe. Even though it took place in Europe, Japan was involved. Japan was mad with gaining power and decided it would be a good idea to bomb an American harbor after Germany had already done three offenses that barely kept the US out. The bombing of Pearl Harbor in 1941 brought the US into the game again with a vengeance. This not only helped progress the war, but also brought the American economy to a boom again. The Great Depression was over, and the fun had only just begun.

Literary Work: Of Mice and Men by John Steinbeck
This American classic was the main focus of the "Modernism" Unit. It takes place during the 1930s during the Great Depression, where men were working on the ranch a lot more than they'd ever thought they would. It's cast of characters is colorful, and the settings bleak. It's horrifying realistic to how life during the Depression was, and only ended with even more of a depressing moment than the time period itself. The book is really good and I suggest you give a read yourself if you already haven't. It a pure representation of life during the Depression, and it's characters are very realistic to how people were back then. 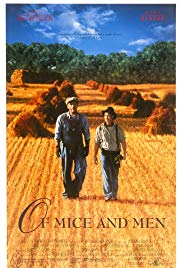