The Yalta conference was a meeting between the Big Three (Franklin Roosevelt, Winston Churchill and Joseph Stalin) and they agreed to demand Germany's surrender and also construct plans post-war. The Yalta Conference contributed to the Cold War by giving the Soviet Union control over Eastern Europe. At the conference, the Soviet Union was given the right to control Eastern Europe. This led to the Cold War because it made the West feel that the USSR was bent on expanding communism.

While a number of important agreements were reached at the conference, tensions over European issues especially the fate of Poland ultimately foreshadowed the crumbling of the Grand Alliance that had developed between the United States, Great Britain, and the Soviet Union during World War II and hinted at the Cold War to come due to rising tensions. 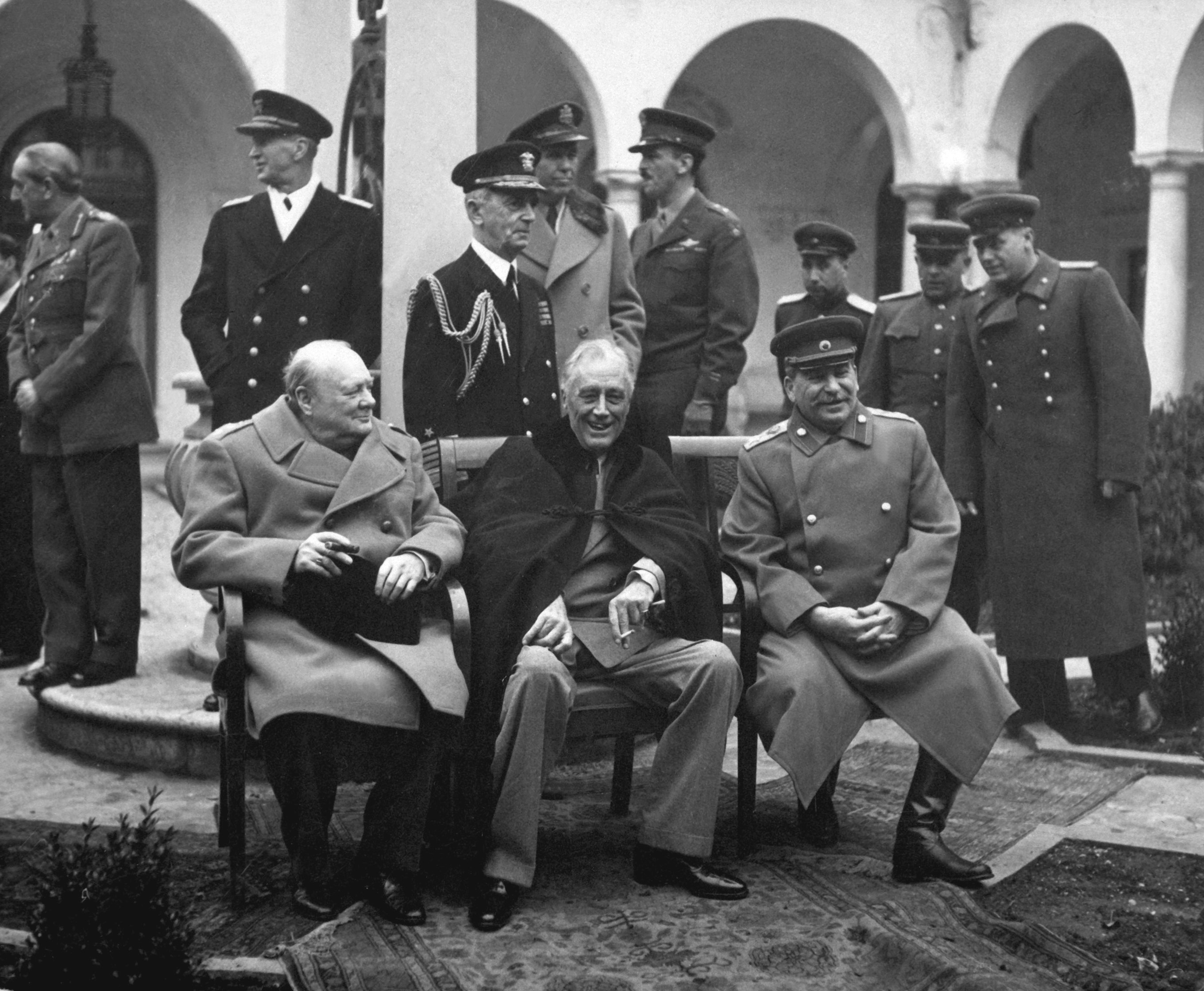 the Potsdam conference was a meeting between Winston Churchill, Harry Truman, and Joseph Stalin (The Big Three) to decide what do with the defeated Germany in terms of territory, reparations, and administration of the occupied zones.

divided Germany and Austria into four zones. this conference increased tensions between the USA and the Soviet Union. It was clear that Harry S. Truman, with the atomic bomb in his pocket, was not willing to make concessions and the Soviets has to accept the deal regarding Germany's reparations.

he Potsdam Conference suggested continued friendship among the Allies, but the deeply conflicting aims of the Western democracies compared to the Soviet Union on the other in fact meant that Potsdam was to be the last Allied summit conference. 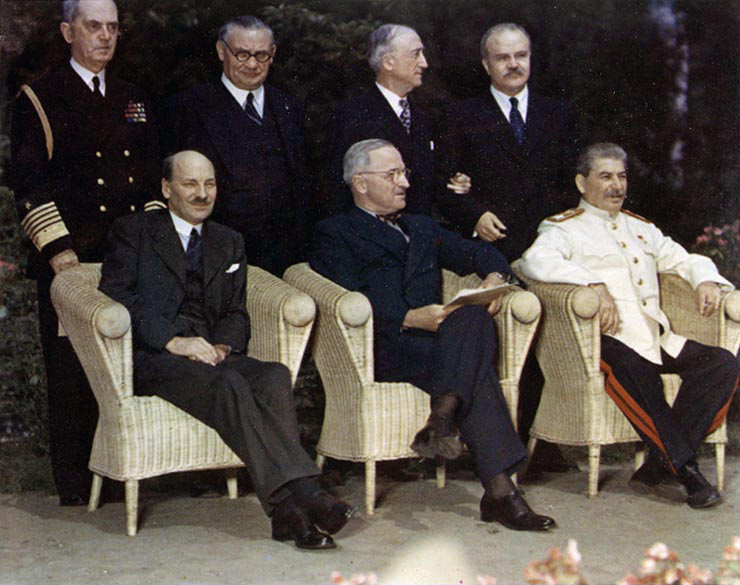 Creation of the Warsaw pact

The Warsaw Pact was formed with member states East Germany, Czechoslovakia, Poland, Hungary, Romania, Albania, Bulgaria, and the Soviet Union. The Warsaw pact was created to counter balance the North Atlantic Treaty Organisation (NATO). The Warsaw Pact was seen as quite a potential militaristic threat, and also the sign of Communist dominance, and a definite opponent to American capitalism. The signing of the pact became a symbol of Soviet dominance in Eastern Europe.

The pact was used more as a means to keep the Soviet allies under a watchful eye than to actually make and enforce decisions. Eventually, the alliance grew to become a way to build and strengthen military forces throughout the Eastern European countries involved. 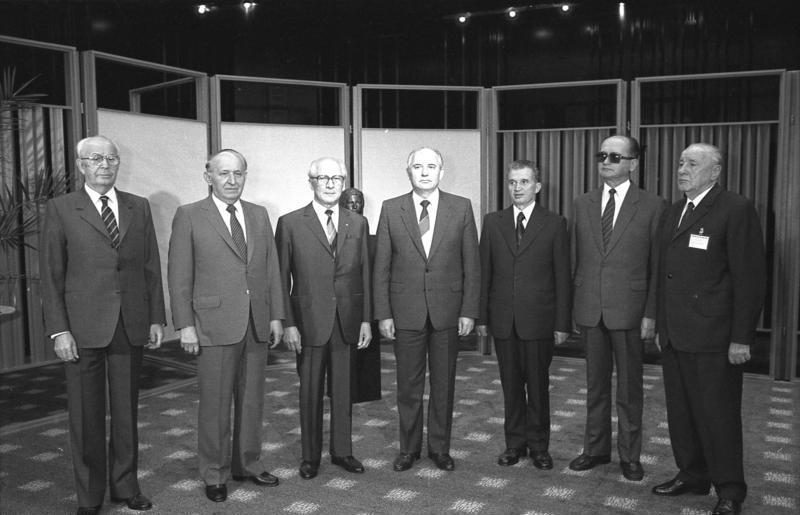 It was built in order to prevent people from fleeing East Berlin. In many ways it was the perfect symbol of the "Iron Curtain" that separated the democratic western countries and the communist countries of Eastern Europe throughout the Cold War.

Most analysts and historians agree that former Soviet leader Mikhail Gorbachev played a pivotal role in the events leading up to the wall's demise and beyond. His policies of “perestroika” and “glasnost,” or openness, paved the way for the dissolution of communist power in Eastern Europe and ultimately led to the collapse of the Soviet Union. 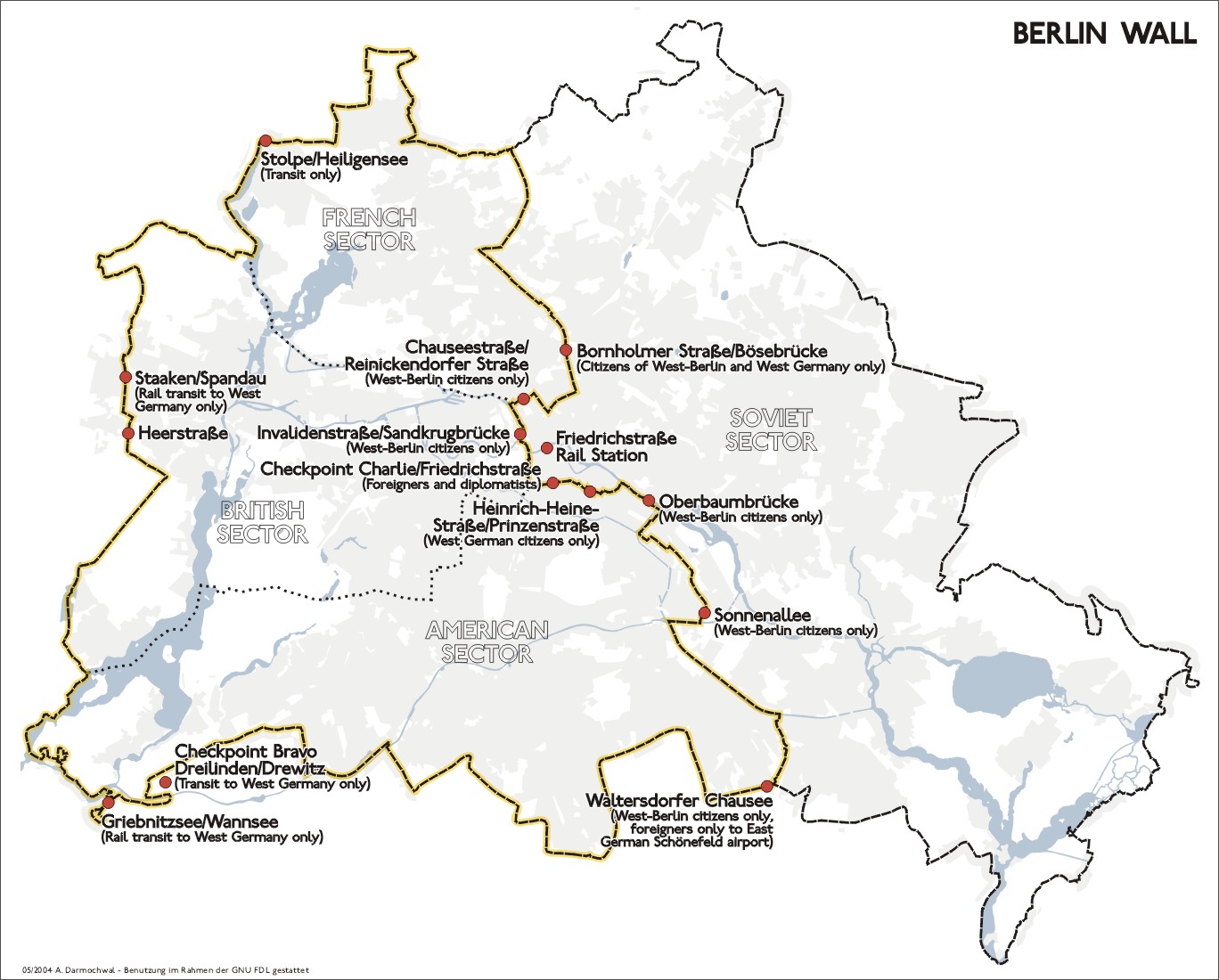 On August 20, 1968 Soviet Union led Warsaw Pact troops in an invasion of Czechoslovakia to crack down on reformist trends in Prague. Although the Soviet Union's action successfully halted the pace of reform in Czechoslovakia, it had unintended consequences for the unity of the communist bloc.

The Soviet invasion of Czechoslovakia was significant in the sense that it delayed the splintering of Eastern European Communism and was concluded without provoking any direct intervention from the West. The invasion did, however, temporarily derail progress toward détente between the Soviet Union and the United States. 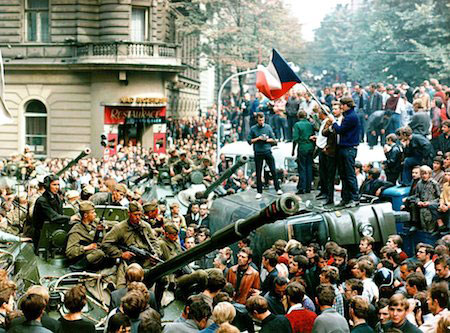 Chernobyl was the nuclear disaster that occurred after a nuclear reactor exploded at the plant causing a fallout within the city. it became the symbol of all things that were wrong with the soviet approach. it also brought international pressure that couldn't be ignored and it touched on concepts like: nationalism and self determination, internationalism, glasnost + perestroika. Mikhail Gorbachev states flatly that the Chernobyl explosion was “perhaps the real cause of the collapse of the Soviet Union.” The Chernobyl explosion was a “turning point” that “opened the possibility of much greater freedom of expression, to the point that the system as we knew it could no longer continue.” 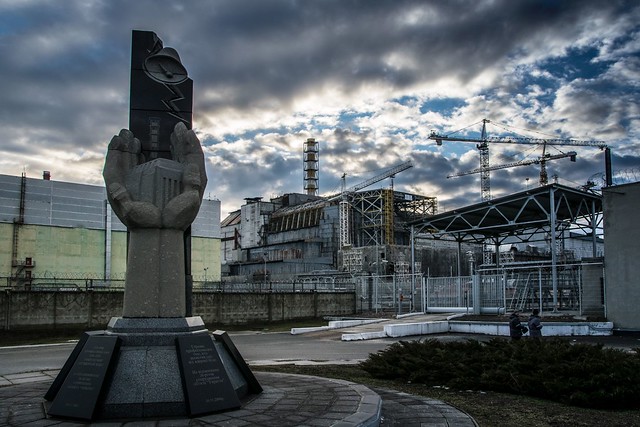 Mikhail Gorbachev announced his intention to follow a policy of glasnost – openness, transparency and freedom of speech; and perestroika – restructuring of government and economy. He also advocated free elections and ending the arms race.

Mikhail Gorbachev and his advisers adopted "glasnost" as a political slogan, together with "perestroika". Glasnost was taken to mean increased openness and transparency in government institutions and activities in the Soviet Union.

one of the main reasons why perestroika failed since it wasn't trialled during the 6 years Mikhail Gorbachev had in power. Mikhail Gorbachev introduced 10 programs but none were introduced, he explained it as “radical restructuring” for the soviet economy.

Glasnost and Perestroika eventually helped cause the fall of the Soviet Union and the end of the Cold War, which had lasted from 1945 to 1991. 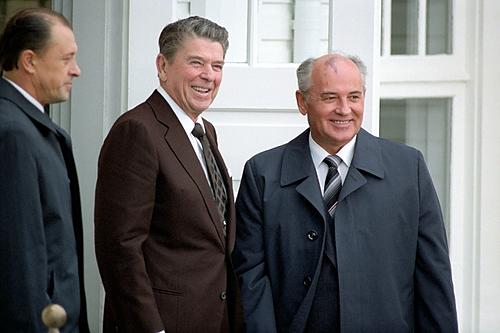 The Malta summit was hailed as the most important event since 1945 when Churchill, Stalin and Roosevelt agreed a post-war plan for Europe at Yalta.

leading up the conference, Hungary opened its borders and the Berlin wall fell. Its main purpose was to provide the two superpowers, the United States and the Soviet Union, with an opportunity to discuss the rapid changes taking place in Europe with the lifting of the Iron Curtain, which had separated the Eastern Bloc from Western Europe for four decades. It is seen by some as the beginning of the end of the cold war.

“The Malta Summit in 1989 was so important, that if it had not taken place, the world out there would be unrecognisable to the one we live in today.” stated Mikail Gorbachev 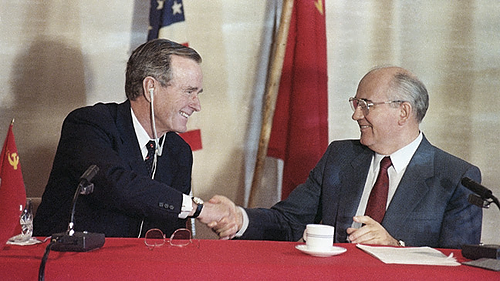 The end of the Warsaw pact

The Warsaw Pact which allied Communist countries was ended. the Warsaw pact ended after its 36 years of existence, the military alliance between the soviet union and its eastern satellites comes to an end. This action was another sign of that the soviet union was loosing control over its former allies and that the cold war was coming to an end.

Anti-Soviet and anticommunist movements throughout Eastern Europe began to unravel the Warsaw Pact. In 1990, East Germany left the Warsaw Pact in preparation for its reunification with West Germany. Poland and Czechoslovakia also indicated their strong desire to withdraw. Faced with these protests and also suffering from a faltering economy and unstable political situation. 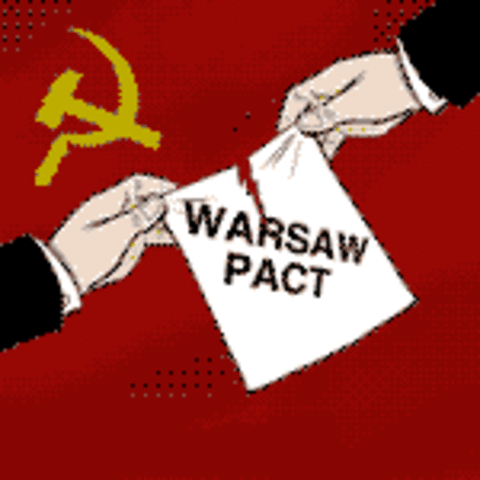 Fall of the Soviet Union

the Soviet Union disintegrated into fifteen separate countries. Its collapse was hailed by the west as a victory for freedom, a triumph of democracy over totalitarianism, and evidence of the superiority of capitalism over socialism.

some factors that contributed to the fall of the soviet union are ethnic tensions, poor economy and political tensions. in the late 1980's (the time of perestroika) there were increasing levels of violence due to competing ethnic nationalism in the Soviet republic. There is a popular theory within Russia that Mikhail Gorbachev sought to destroy socialism and the Soviet Union, although there is no indication that these were his true intentions. Mikhail Gorbachev's Perestroika reforms contributed to the downfall due to the economy failing to accelerate and his weak policies led the state into a downward spiral. the economy within the USSR crumbled when oil prices dropped, Petr Aven describes it as “It was a major turning point in 1986 when oil prices fell and all possibilities to generate revenue[for the USSR] crumbled.” . This long-term trend, compounded by the decline in oil revenue, led to the downfall of the soviet union