Timeline Chapters 3-7 of The Emirates: Our History

This is a companion timeline for Chapters 3 - 7 of The Emirates: Our History

During this Neolithic or Stone Age period, permanent settlements are found at various sites, as on the Islands of Marawah and Dlama, west of Abu Dhabi, along the coast at Sharjah and Umm al-Quwaim, and inland at Jebel Buhais. We also find maritime trade with Mesopotamia.

The Ubaid Period had coastal settlements and sea trade with Mesopotamia (Iraq) to the North. Archaeological sites include the Island of Dalma in Abu Dhabi, as well as on the coast of Sharjah and Umm al-Quwaim, as well as in interior mountains and plains at Jebel Buwais. Evidence of pearling appears in the coastal areas and trade in pearls with Mesopotamia.

Challenges of a Drying Climate

The Indian Ocean monsoons shifted and moved south to their current position. Evidence of this is found in layers of sand in the ancient lake of Awafi in Ras al-Khaimah. This meant the region of the UAE experienced a dryer climate with much less rainfall.

The settlement of Hili 8 at al-Ain provides archaeological evidence of substantial farming around the oases. Wells were dug, and planting of crops was developed along with traditional gathering of wild grains and plants. Also, by this time copper mines were developed in the al-Hajar mountains, and the UAE became one of the important sources of copper during the Bronze Age.

Ancient Sumarian cuneiform tablets from Mesopotamia (Iraq) referred to a Magan civilization of peoples living in the coastal area of the UAE and Oman. These tablets even referred to the 32 rulers of Magan, which implies a long period of rule and civilization. This Magan civilization was rich from its development of copper mines from the Hajar mountains, and it developed advanced shipbuilding that allowed to sail and trade up the Arabian Gulf to Mesopotamia and across the Indian Ocean with the Harappan cities and civilization along the Indus river in what is now called Pakistan

The Early Bronze Age and the Emergence of Oases

New technologies emerged including the use of bronze metal made from tin and copper smelting. We also find improved pottery as in the Hafit tombs at Tel Abraq. The climate in this period changed again with limited amounts of rainfall in the winter months. With this change came seasonal movements of herds of wild animals, and the herding of some domesticated animals, like goats, sheep and cattle in search of the grasses of winter (p 25 of textbook). Photo is of the Jebel Hafit beehive structure (circa 3200-1600 BCE) source under Creative Commons license attributed to Alexandermcnabb [CC BY-SA 4.0 (https://creativecommons.org/licenses/by-sa/4.0)]

Archeologicalists discovered circular stone tombs and settlements of the Umm an-Nar civilization. These tombs and settlements are found in Abu Dhabi, at Tell Abraq in Sharjah, at Kalba on the east coast and at Hili in al-Ain. (For more, see the World Heritage Site https://whc.unesco.org/en/list/1343 ) The Umm an-Nar culture disappeared around the year 2000 BCE. Two different theories are given to explain the disappearance. One is that trade of imports suddenly declined. A second theory is is there was a prolonged period of drought or climate change that reduced farming and food

This chapter includes a discussion of the Wadi Suq period, 2000 - 1600 BCE. This period followed the Umm an-Nur culture. Archaeological evidence shows the presence of luxurious gold objects and evidence of a wealth in trade for the region (p 45-46 in textbook). Prominent settlements continued in Abu Dhabi, at Tell Abraq in Sharjah, Shimal in Ras al-Khaimeh, Kalba and Hilou in the Eastern region, and at Hili in Al-Ain. We find advanced metalwork in bronze, and making of bows and arrows used for war and hunting (p 48). New forms of elaborately decorated pottery and stone vessels and beakers also appear.

With a drier climate, the Wadi Suq people and culture adapted to the changing conditions. There is continued evidence of pottery and metalworking as at the site of Saruq Al-Hadid in Dubai.

The Falaj and the Growth of Towns and Villages

During the Iron Age (1300 - 300 BCE), iron metal was rare in our region, where bronze working remained predominant, probably due to the availability of local copper mines (p 52 textbook). The invention of a irrigation that channeled mountain springs of water through a system of falaj (aflaj = plural) canals or qanats to farm fields. During this period agriculture flourished as at Hili and Rumeilah near Al-Ain, and at Al-Qusais and Muweilah in Sharjah, and Bithna in the Eastern region. Large pottery storage jars were found at Mueweilah that stood 1.5 meters in height and held around 400 gallons of water

The Falaj (plural is Aflaj) is a means fo delivering water from underground water wells to farm fields. In our region we find evidence of its use as early as 2000 BCE. This system of irrigation was highly developed in ancient times including here in the UAE.

Watch this video from UNESCO and NHK here https://whc.unesco.org/en/list/1207/video

These sources are publicly available under license CC-BY-SA IGO 3.0
. For more go to this UNESCO website on the falaj. https://whc.unesco.org/en/list/1207

A large town that prospered in Sharjah with wells, houses, and a palace or temple complex. Photo: Patrick Kane Ph.D., courtesy of Sharjah Archaeology Museum 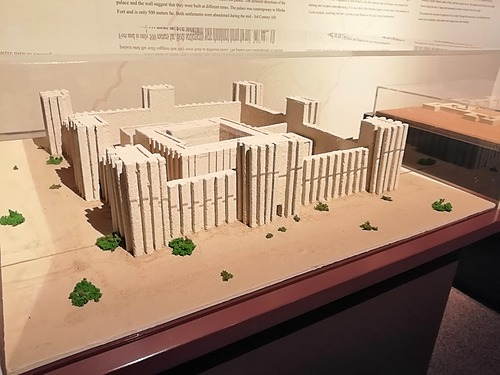