The Mycenaen civilization set up Greek culture. They came in contact with the Minoans, who are known as seafaring traders. The Minoan culture was also introduced to Greece and was part of the Greek life. There was not a specific region or settlement everyone stayed at because there were many mountains dividing each mini civilization.
http://cache.virtualtourist.com/6/1194503-Mycenae_Mycenae.jpg

Mycenaen civilization collapses when the Dorians invade. The Dorians were nomads and were not literate from 1150-750 B.C. Because they weren't literate, there are not many written records of their time. This lead to the tradition of passing down stories and myths orally. The economy finally declined and they died out. A war started between Greece and Persia because Persia wanted to expand by conquering all the city-states. This took place on the coast of Anatolia, so Athens came and tried to help Greece, but Persia finally conquered it. The Persian leader, Darius vowed to destroy Athens for trying to help the Greeks. This was the beginning and encouraged the many wars to come.
http://cdn.dipity.com/uploads/events/991de6b5feb2b80a63c3a6a6915e4c9c_1M.png

The Persians approached Marathon, where they were greeted by Athenian phalanx's. They were not prepared, and as a result, about 24% of their army died. During this part of the war, Persia started to suffer, not knowing a way to defeat these phalanxes. An Athenian named Pheidippides realized a great amount of the Persians were dead, but there were still some ready to fight; he ran from Marathon to Athens to warn the Athenians to prepare for more Persians to invade. His act saved Athens. 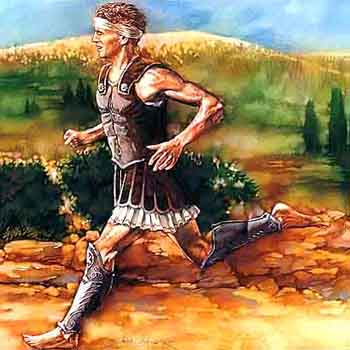 Rebirth of the Persians and the battle of Thermopylae

The leader of the Persians, Darius eventually died; his successor Xerxes vowed revenge on Athens. They were responsible for the death of his father, so he assembled an even bigger and stronger army than before to crush Athens. The city-states were divided by their loyalty to stay neutral, support or fight against Persia. Most of the other city-states helped Persia, but a few allied with Athens. An important ally of Athens were the Spartans. The Spartans realized they could only delay the Persians, they couldn't defeat them; the Spartans told everyone to retreat, reassemble and prepare for a tough battle. The Spartans held the Persians off for three days, but all died during that battle. Their sacrifice and bravery completely saved Athens from total defeat.

Battle of Salamis and Plataea

The Athenians prepared for a tough battle, but if not for their strategic minds they would've been conquered. Themistocles, an Athenian leader developed a plan to use their natural barriers to help them defeat Persia. His plan was to place ships near the island of Salamis, a narrow channel southwest of Athens. The Persians didn't know how to navigate through their set up, this resulted in their defeat, losing over one-third of his men. Without Themistocles's strategic plan to move the battle to water, Athens would've been destroyed.

After the Persian War: The Delian League

With the defeat of the Persians, all the city-states felt extremely confident, spirited, and free. Athens created league called the Delian League. This was a group of city-states that vowed to support each other if they ever faced another attack. This was Athen's Golden Age, where they grew very wealthy, lead the Delian League and built a miniature Greek empire. Unfortunately, Athens took their allies for-granted and decided to tax their allies heavily. This started a dispute among some of the city-states.
http://discoverthetrip.com/uploads/images/4877-Athens_Greece_Europe_18.01.2012_5.jpg

He was a soldier during the Peloponesion War, and was the first person to focus on people's individual action. He believed bad things would improve if we improved. Lower class citizens liked him because he challenged authority and taught on the streets for everyone to hear. He was eventually put on trial for corrupting the youth and was found guilty. The officials gave him Hemlock, where he taught until his death.

Sparta became mad at the Athenians for the way they controlled the Delian League and the other city-states, so they called war on Athens in 430 B.C. Athens was very prepared to fight Sparta, but Sparta crushed Athens. They then called a truce in 421 B.C, but Athens breaks it by invading Sparta's wealthiest ally, causing Athens to surrender and lose power.

Aristotle was a brilliant student of Plato, and is known to be one of the smartest men of his time. He was the first one to apply logic to science and created the scientific method. He also created a school known as Lyceum and a method called syllogism. Syllogism is an "If, And, Then" theory which is the foundation for most sciences. He created this because it was reliant on the gods.

King Phillip II, invaded many of the Greek city-states and made Macedonia the middle of his empire. He decided if he could conquer all of Greece, he'd have the coastline for trade, a rich culture, great soldiers, and a very wealthy empire. Unfortunately, while at his daughter's wedding, he was killed by a guard. Nobody was prepared to take over, but luckily he trained his son well under Aristotle; Alexander, his son was ready to take over.

Alexander was educated by Aristotle and excelled in both fighting and education. He was successful in all of his invasions, and wanted to carry out his father's missions in conquering Persia, but Persia was against Alexander and put up a fight against him. Alexander was a well liked man because he too, fought during battles, and he appealed to everyone by putting himself in their shoes. He lived like everyone else and didn't give himself extra attention or rights a normal king/leader would have. In 323 B.C, he marched toward the Indus Valley, but caught a bad case of the flu and died a few days later. This was the end of his great legacy, and his empire finally divides and falls apart.
http://www.biography.com/imported/images/Biography/Images/Profiles/A/Alexander-the-Great-WC-9180468-1-402.jpg