The Dark Ages took place when the Dorians, a nomadic tribe, invaded Greece. The Dorians did not have literacy which effected their trade, economy, government, and their history. This lead to the tradition of story telling, especially mythology. Since they were lacking the skills of reading and writing, historians concluded that they were a group of unhappy people. This time period was called the Dark Ages because we do not know much about the Dorians and their culture.

In 725 B.C., Sparta conquered the Messenians and made them helots, but in 650 B.C., the Messenians revolt. Despite being outnumbered, the Spartans defeated the helots. This created a constant fear of an uprising in Sparta. The Spartans solution was to create a tough and strong military.

Reasons for the Start of the 1st Persian War

Persia was interested in gaining land, so they began to conquer Greek city-states in Anatolia. Most of the city-states revolted against Persia for their independence. Athens sent reinforcements across the sea. With the help from Athens, the Greek city-states defeated Persia. Persia is angry at Athens and the way changes from a war of gaining land to a war of revenge. Pheidippides ran 26.2 miles from Marathon to Athens to tell Athens about the defeat of Persia in Marathon. He told them to prepare themselves for Persia's attacks that were coming. After he told the people the message, Pheidippides passed out and died. Since Athens had warning, they delivered the final blow to defeat Persia.
http://www.livius.org/a/1/maps/marathon_map.GIF

Thermopylae is a narrow mountain pass where 7000 Greeks, including 300 Spartans, held Persia off for three days. The Spartans knew that they were going to die, so they sent the other city-states home and sacrificed all of their lives for Greece.

Athens beat Persia not by strength, but by strategy and knowledge. Athens positioned themselves into a naval battle in the waterway around the Island of Salimis. Persia was unable to navigate the narrow water passages and Athens was victorious.
http://www.aurorahistoryboutique.com/blog/battle-of-salamis.png

The Delian League was set up after the Persian Wars were over and it was an alliance between the Greek city-states. Athens took control of the league and taxed the other city-states higher.

The Golden Age of Athens

During this period of time, Athens was very strong, powerful, and wealthy nation. They were the leaders of the Delian League and grew very wealthy by taxing the other members very high. Athens was able to build a mini Greek empire.

Philosophy emerged because of the lack of faith in the Athenian democracy. Philosophers were full of wisdom and used natural law and logic to try to shift away from mythology. There were three very influential philosophers in Athens, they were Socrates, Plato, and Aristotle. Socrates told the people to question themselves and authority, for this he was put on trail and convicted to death. Plato was the most famous student of Socrates. He wrote down Socrates teachings in the form of dialogue. He focused on collective action and was a critic of democracy. Aristotle was a brilliant student of Plato and developed the scientific method and syllogisms.

The Peloponnesian War is also referred to as the Greek War because it was between Athens and Sparta, two Greek city-states. Sparta was angry at how Athens handled their power, and Athens wanted to defend its leadership, so the two city-states went to war. Sparta's strategy was to be very offensive and try to fight Athens on the land, but Athens' strategy was to avoid land battles and force Sparta to come to them. In 404 B.C., Athens surrendered to Sparta, they lost their wealth and power, but not their independence. 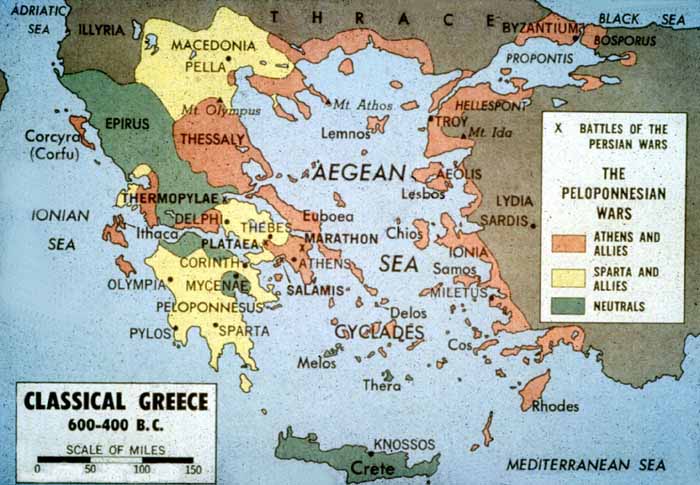 The Olympics were very important in Greece because they exercised the ideals of a strong, healthy man and arete. They also provided healthy competition for the Greeks. The Olympics had political implications, these were that any fighting between the city-states would cease until the Olympics were over. They began in 426 B.C. and they have happened every four years in the city of Olympia, in honor of Zeus. The athletes participated in extensive training and were unpaid, but the winners received prizes. 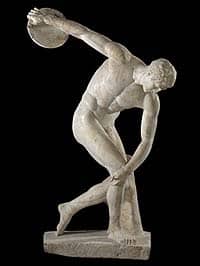 After his father's death, Alexander continued his father's conquest and invaded Persia and Egypt. He marched his military towards the Indus Valley, but he was unsuccessful. On his way home, he was stricken with sickness and died in a few days. After his death, his empire was divided into three parts and there was a new shared culture between them. The Hellenistic culture was a blend of Greek, Persian, and Indian. This became known as the age of beauty, science, and math.