During the Cold War, tensions arose between America and the Soviet Union, as they shared different political views: it was democracy versus communism. Each side was armed with nuclear weapons and were in a state of stalemate. Here, America acted as the police and tried its best to "contain" the spread of communism by the Soviet Union.
http://chandrakantha.com/articles/indian_music/filmi_sangeet/media/1991_Cartoon_1.jpg

Korea was annexed by Japan until 1945 when the Soviet Union invaded. America, fearing that the Soviet Union sought to take over the entire peninsula, intervened from the south. At the time, US feared the spread of communism through the Soviet
Union. Thus, America felt compelled to intervene and "contain" the Communism.
Korea was separated into the north and south: the north supported by the Soviet Union and the south supported by America. On June 25th, 1950, North Korean troops attacked, and in response, the United States and the United Nations combined forces and fought back, thwarting the invasion. 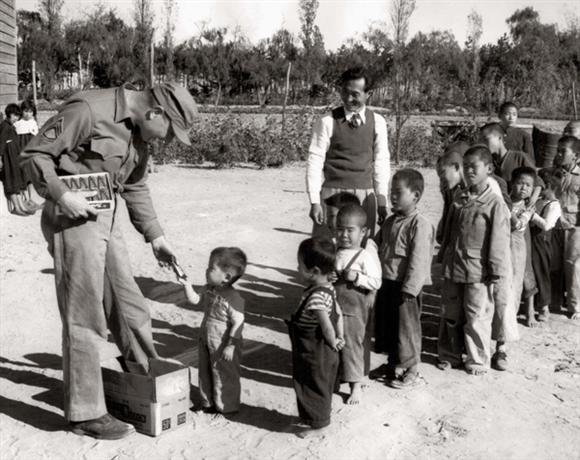 After fighting the First Indochina War, Vietnam was officially divided into North Vietnam and South Vietnam: the north controlled by Ho Chi Minh and his Communistic party and the south controlled by the French. To the US, Vietnam was very important. They believed in the domino theory, in which the Communism of North Vietnam would trigger the spread of Communism all over Southeast Asia. Thus, America supported and funded South Vietnam.
President Nixon promoted Vietnamization, in which the US would gradually withdraw its troops and restore the power back to South Vietnam. In order to make a settlement, Nixon pressured North Vietnam by bombing it. The truce was signed in January of 1973. The mastermind of the 9/11 terrorist attack, Osama Bin Laden, and his millitant group, Al-Qaeda, had their base and training camps in Afghanistan. Afghanistan had no government and were basically controlled by the Taliban. When the Taliban refused to turn Osama Bin Laden over to the US, President Bush, determined to bring them to justice, planned an allied invasion. The goal was to completely thwart Al-Qaeda and Taliban. Even today, US troops continue to fight the enemy forces in Afghanistan. Furthermore, US is trying to help Afghanistan establish its government. http://worldcrunch.com/images/story/4535212980_ea09d526ec_b.jpg

The leader of Iraq, Saddam Hussein, was suspected to have weapons of mass destruction. America acted as the police by sending in surveyors to assess whether or not Iraq truly had the dangerous weapons that posed a threat to international security. Even though there was no compelling evidence to show that Iraq possessed these weapons, America sent in troops, captured Saddam Hussein, and started the war.