Events Leading to the Civil War The Kansas-Nebraska Act was passed which allowed the Kansas and Nebraska territories to decide if they wanted to be a free or slave state using Popuar Sovereignty. By 1856, Kansas became very violent as pro- and anti-slavery forces fought over the state's future. The widely reported violent events was just a small taste of the violence to come with the Civil War. This convention was the first effort to establish Kansas under a state constitution; it drafted the Topeka Constitution that was approved by Free-State voters in Kansas on December 15, 1855. This document banned slavery in Kansas. The convention was organized by Free-Staters seeking to subvert the official (proslavery) territorial legislature, which was elected in March 1855 in polling suffering widely from electoral fraud. http://www.kshs.org/kansapedia/graphics/portal/201212_kansapedia_topeka_constitution.jpg

Dred Scott lost his case argueing that he should be free because he had been held as a slave while living in a free state. The Court ruled that his petition could not be seen because he did not own any property. But it went further, the state said that even though he had been taken by his 'owner' into a free state, he was still a slave because slaves were to be considered property of their owners. This decision furthered the cause of abolitionists as they increased their efforts to fight against slavery.

The Lecompton Constitution was the second of four proposed constitutions for the state of Kansas. The document was written in response to the anti-slavery position of the 1855 Topeka Constitution of James H. Lane and other free-state advocates. When the Kansas-Nebraska Act passed, Kansas was allowed to determine whether it would enter the union as free or slave. Numerous constitutions were advanced by the territory to make this decision. In 1857, the Lecompton Constitution was created allowing for Kansas to be a slave state. Pro-slavery forces supported by President James Buchanan attempted to push the Constitution through the US Congress for acceptance. However, there was enough opposition that in 1858 it was sent back to Kansas for a vote. Even though it delayed statehood, Kansas voters rejected the Constitution and Kansas became a free state. 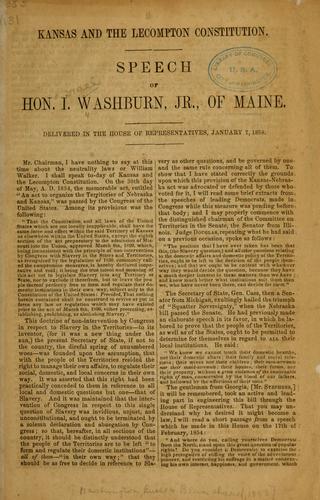 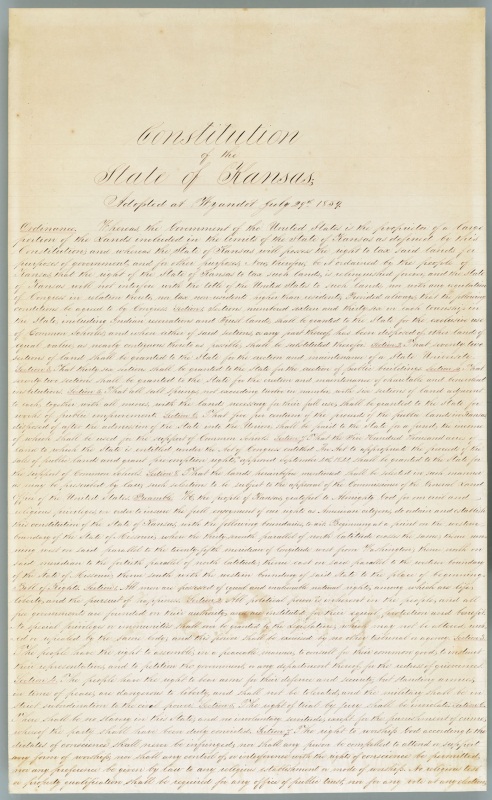 The constitution settled the terms of Kansas' admission to the United States, particularly establishing that it would be a free state rather than a slave state.[1] The constitution represented a pragmatic compromise over hotly contested issues: it rejected slavery and affirmed property rights for women and their right to participate in school elections, but also denied universal suffrage for women, blacks, and Indians. http://images.morris.com/images/cjonline/mdControlled/cms/2008/01/27/240838840.jpg

Eli Whitney's invention of the cotton gin in 1793, cotton became very profitable. However, at the same time the increase in the number of plantations willing to move from other crops to cotton meant the greater need for a large amount of cheap labor, slaves. The southern economy became a one crop economy, depending on cotton and on slavery. On the other hand, the northern economy was based more on industry than agriculture. The northern industries were purchasing the raw cotton and turning it into finished goods. This disparity between the two set up a major difference in economic attitudes.

At the end of the Mexican War, America recieved western territories. This was a problem because the new territories would be admitted as states. They didn't know if they would be free or slave? Congress passed the Compromise of 1850 which made California free and allowed the people to pick in Utah and New Mexico.

Uncle Tom's Cabin (Life Among the Lowly) was written in 1852 by Harriet Beecher Stowe. Stowe wrote this book to show the evils of slavery. This book made a huge impact on the way that northerners viewed slavery. It helped further the cause of abolition and even Abraham Lincoln recognized that this book was one of the events that led to the outbreak of the Civil War. http://startempathy.org/sites/default/files/attachments/Uncle-Toms-Cabin1.jpg

One of the most publicized events in Bleeding Kansas was when on May 21, 1856 Border Ruffians ransacked Lawrence, Kansas which was known to be a staunch free-state area. One day later, violence occurred on the floor of the U.S. Senate. Pro-slavery Congressman Preston Brooks attacked Charles Sumner with a cane after Sumner had given a speech attacking the pro-slavery forces for the violence occurring in Kansas. http://t1.gstatic.com/images?q=tbn:ANd9GcQOHX_ccoXKcW3T7qVNlWwk1F30Uhoa7_x-I589QJtk6zAaO7s8loso1czM