Reaction to the Break In

“Who would do such a thing?” -- This political cartoon symbolizes the reaction by the American public towards the watergate incident. With the depiction of several senior officials with Nixon, and the Attorney General John Mitchell, the cartoonist is implying that the operation to break into the DNC was pointless as all of these high ranking officials eventually got traced back to the initial break-in. Everything that these people did to try and cover up the incident was unconstitutional and it is implying that they all eventually would get caught no matter what.

Destruction from Scandals in the White House

This political cartoon by Herb Block shows that many of the scandals in the early 70’s had connections to the White House. He is alluding to the idea that Nixon has a large role in these scandals and that eventually he will be blamed. He shows that these issues are being investigated and will eventually result in Nixon being held responsible.

This senate resolution marked the start of their investigation into the Watergate scandal. With this resolution, the senate was able to establish a select committee of 7 members to investigate into any illegal, or unlawful activity in the months leading up to and during the election of 1972, which Nixon won by a landslide. The election took place just a few months before the Watergate incident, so this committee was able to investigate their involvement with the election, and ultimately trace it back to Nixon’s senior administration. 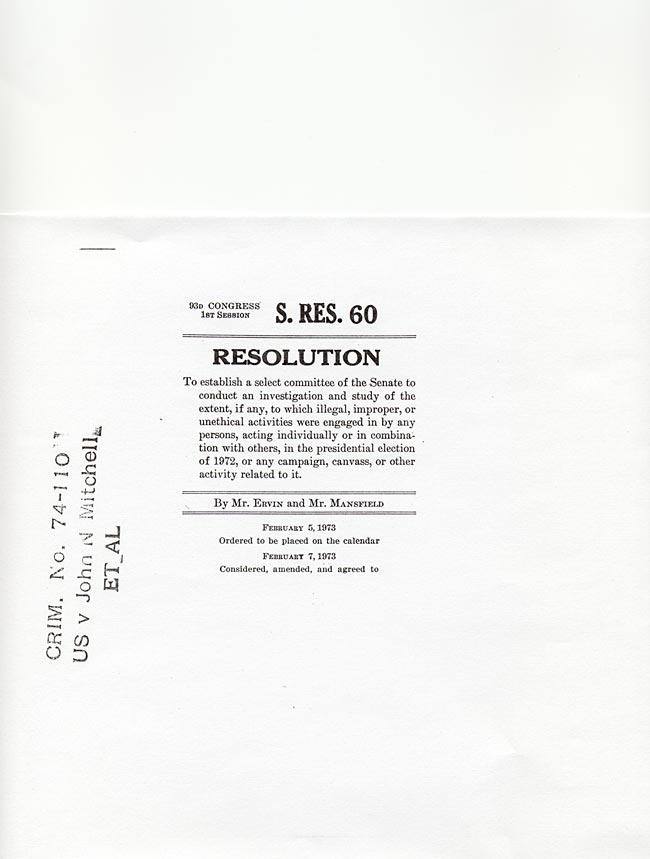 This political cartoon shows Richard Nixon as Pinocchio. As the Watergate scandal progressed and investigations continued, Nixon's cover up attempts only backfired, proving his dishonesty and corruption. The more he lied about the scandal, the more hot water he was in. The backlash and growing distrust from the American people ultimately led to Nixon's resignation. 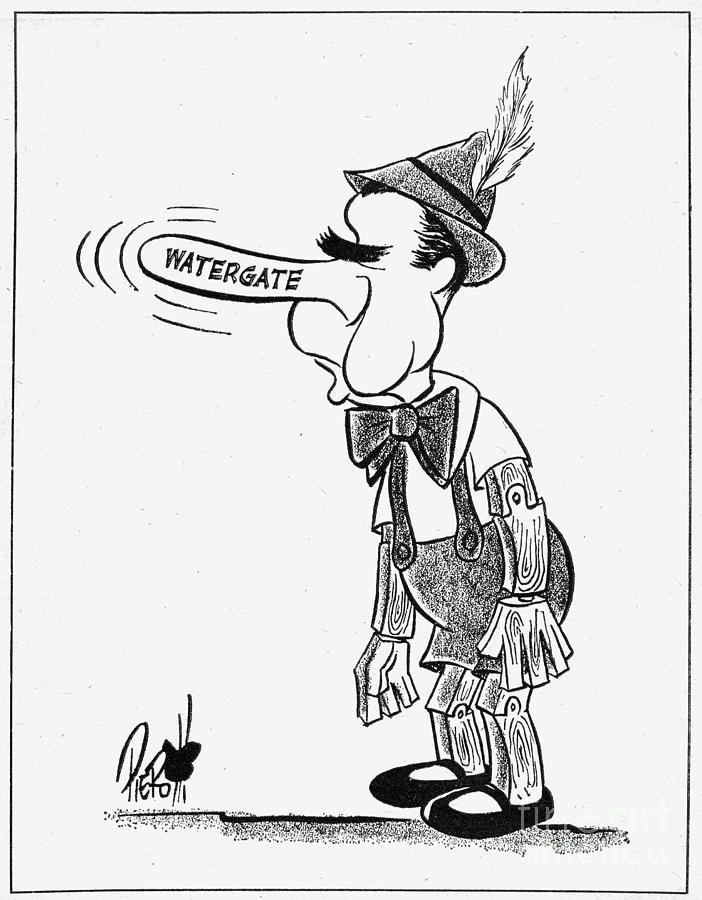 This political cartoon shows how Nixon was heavily invested in the stolen tapes from the DNC, despite him trying to cover up his crime. The Democrats looking through the doorway at Nixon are unaware of the actual scandal occurring while Nixon is having a field day with the stolen tapes. Nixon failure in trying to cover up his actions in the scandal proved to the American people that, despite his claim, he was in fact a crook. The persistent backlash from the public due to his dishonesty heavily contributed to his downfall and departure from office. In the event known as the Saturday Night Massacre, President Nixon fired special prosecutor Archibald Cox. His firing later caused the resignations of Attorney General Richardson and Deputy Attorney General Ruckelshaus. Following the leave of these cabinet members, Nixon further refused to give up any tapes that were being demanded. Nixon not complying contributed to the distrust and skepticism from the American public.

This political cartoon, created by Herb Block, was an illustrated example of Nixon’s situation at the time. Many of his cabinet and aides had been involved in illegal activities such as his vice president, Spiro Agnew, who resigned after a charge of tax evasion. While his aides were being found guilty of various illegal activities, Nixon was labeled as a “unindicted co-conspirator” by the Watergate Grand Jury, a blow to the trust that the public had in the president. 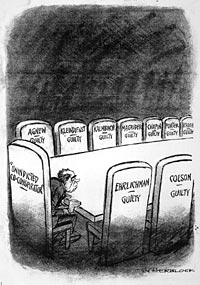 This other news headline, from the same New York Times, relayed the position that people believed in Nixon’s impeachment. Surprisingly, as mentioned in the article, Nixon still remained confident at this point, believing in a lack of evidence. However as history would show, Nixon’s confidence would shrivel away as he declared his resignation only two months later. 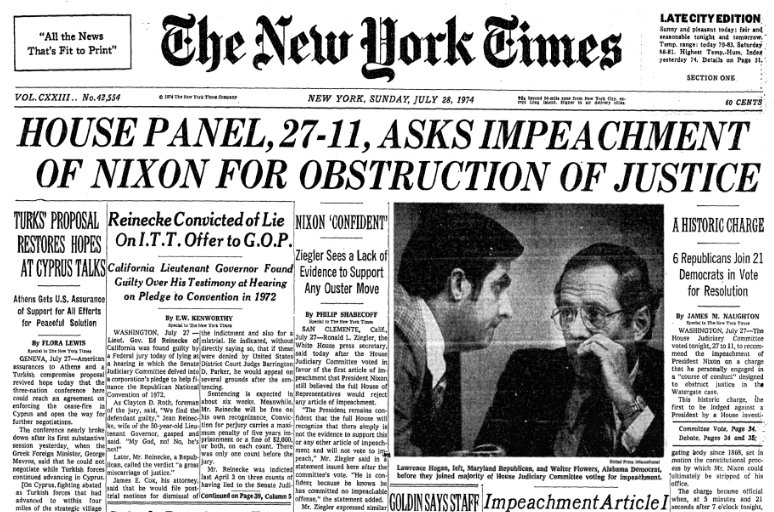 This front page news story, within the New York Times, encapsulates the immediate results of Nixon’s resignation. The articles attached to this front page speak of the large shift in politics that this event had caused, which would later be known as the event that turned much of the public to a distrust of the government. This is compounded by the added speculation of the vice president as shown in the bottom left column. Essentially, Nixon’s resignation was such a notable shift in American history, that it would leave an effect that is visible even today. 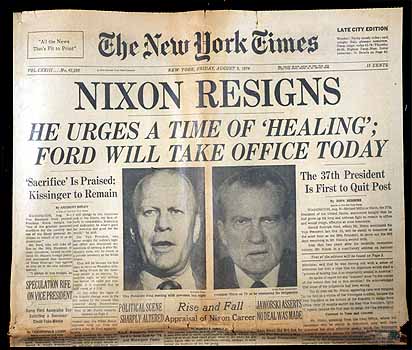 As a result of the little information initially received about the burglars in Watergate, the Privacy Act of 1974 made it legal for governments to keep identifiable information of individuals in the different federal agencies. With this information, these agencies have individuals in their records and if necessary, they can use this information to track down criminals. Overall, security increased, the overall idea behind this was to prevent something like the Watergate break-in from happening again. 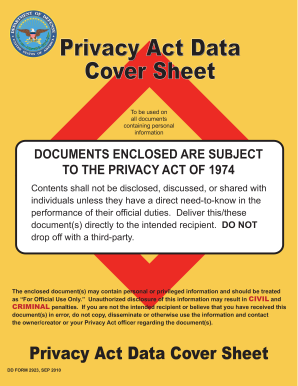 This letter to the special prosecutor of Nixon’s case, Leon Jaworski, is extremely vital in looking at the protection that the president held in terms of legal issues as well as how a situation such as the Watergate scandal affected these. For instance, it shows that although America claimed to hold this legal standard with all presidents, this was the first time in which they had to use this legal power against one. As shown in the list included, special conditions had to be discussed in detail for bringing the president through the legal system, in an effort to avoid any added dilemmas 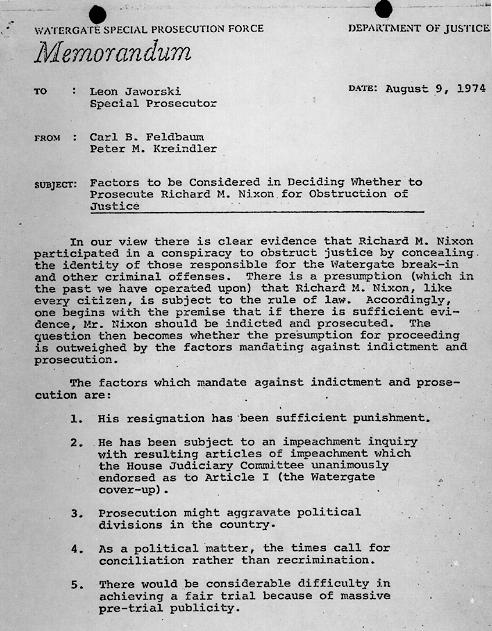 This was the official document that recognized the presidential pardon by President Ford to Richard Nixon. In this proclamation, Ford makes it clear that Nixon was very likely to be indicted and face harsh punishments with the laws he broke. However, he understands that Nixon relinquishing the presidency was enough punishment for him, and that the whole trial process would cause unnecessary debate and divide among the American people. As a result, he thought it was best to pardon and realizing that Nixon resigning was enough punishment. 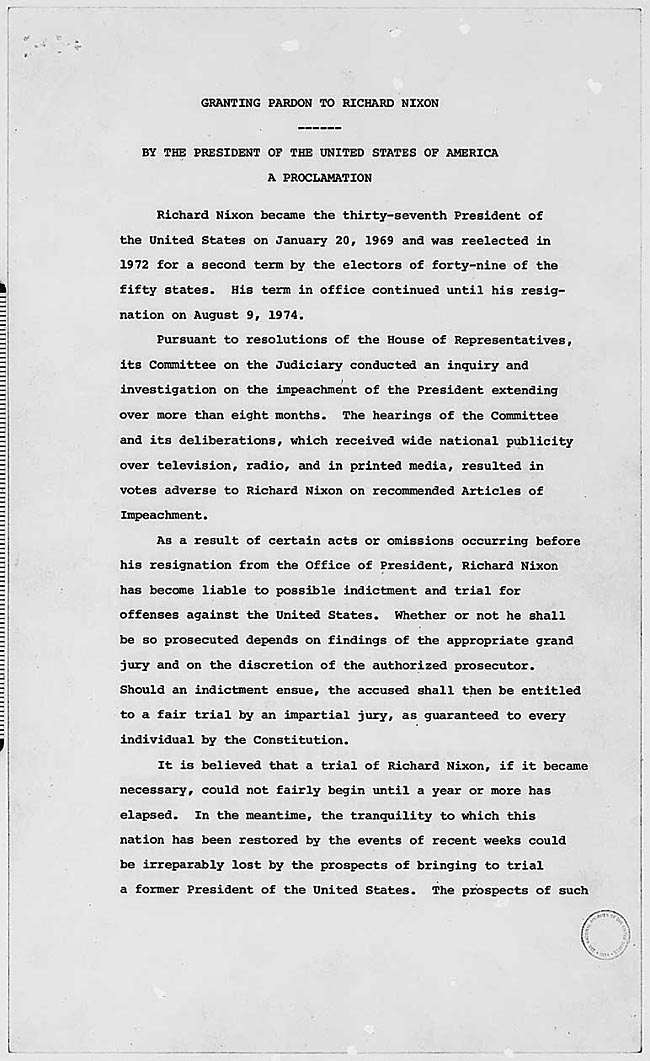 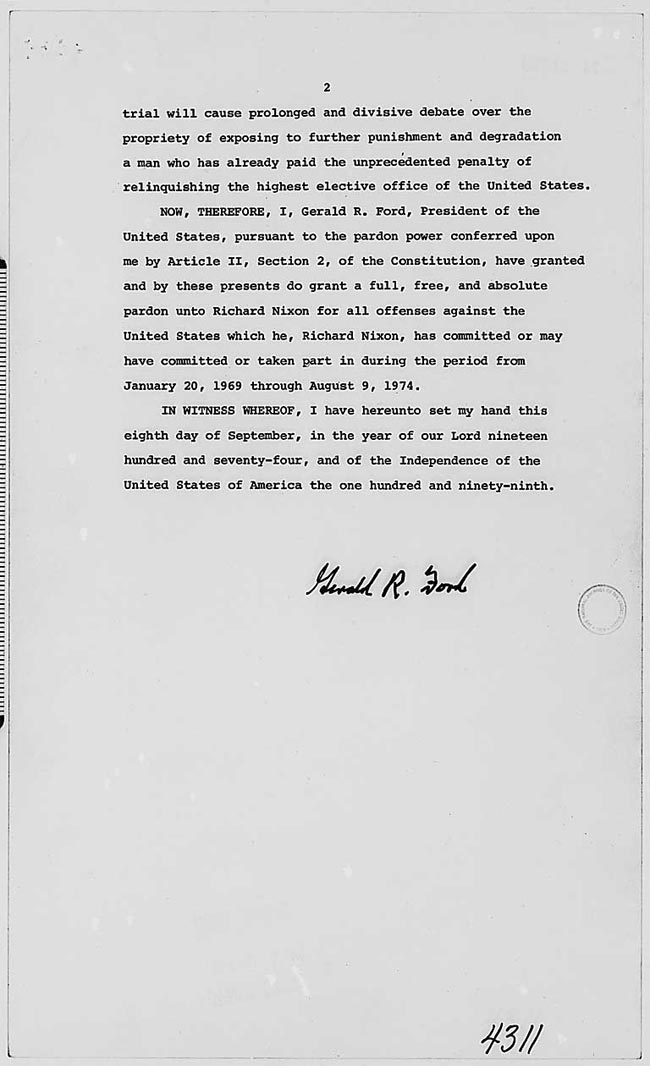 After Nixon's resigned, he was later pardoned by his sucessor, Gerald Ford. Ford did so and justified his actions by explaining that the scandal needs to be put in the past so the country could move forward, and the scandal being publicized would only bring further destruction to the American people. Ford received much backlash and hatred for pardoning Nixon, as Nixon grew to be hated and distrusted by the American people. Nixon responded to the pardon by admitting his wrongdoings and explaining he should have had better control of the situation.

The Ethics in Government Act was passed soon after Watergate. The act made it a requirement that all public officials release their financial and employment history to the public. The American public obviously lost some of their confidence in the government after this scandal, but with the release of this information, it restored some of their confidence. Over the years, as seen with this Act in 1999, the act has been amended to protect certain families and groups of people, but overall, it resorted the public’s confidence in the government with the release of some of their financial history.