Tahitians colonize New Zealand, the last great island region in the Pacific to be reached by human beings. Tahitian immigrants, now known as Maori islanders, settle in New Zealand. The climate is too cool to grow Tahitian crops, but there is a lot of big slow wildlife, so the Maori become hunter gatherers.
http://www.firstlighttravel.com/blog/wp-content/uploads/2012/08/Moa-Bones.jpg
The Moa, a large flightless bird was driven to extinction by 1300.

The Tongan people become free of Fiji rule under the leadership of Aho’eitu. Aho’eitu is the founder of the Tonga Empire. Under his leadership, the Tongan empire expands quickly and aggressively, collecting taxes over much of Polynesia.

The Easter Island statues or Moai are carved and erected sometime around 1000 AD. These are competitively built, with larger statues giving greater status to tribal leaders. The statues represent ancestral chiefs who were believed to be directly from the gods and whose supernatural powers could be harnessed for the benefit of humanity. The Easter Island statues appear to be only heads, because they were built on the side of a volcano and their bodies were buried in soil. 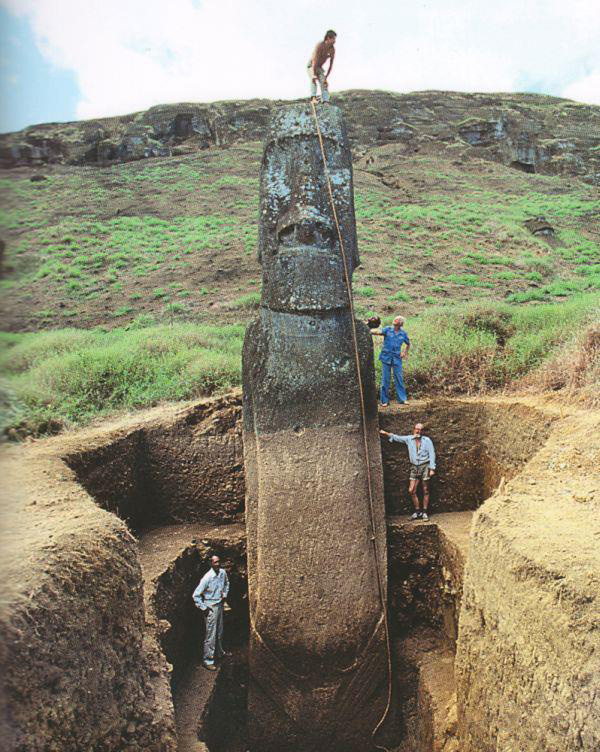 Because the Sweet Potato is high in calories, it led to a rise in farming culture.
Sweet potato remains in Polynesia have been carbon dated to 1100 AD. They most likely came from the coast of South America. This suggests that Polynesians traveled to South America as early as 1100 AD.
http://www.npr.org/sections/thesalt/2013/01/22/169980441/how-the-sweet-potato-crossed-the-pacific-before-columbus Nan Madol is a giant stone city that was home to the nobility of Pohnpei. The Saudeleur dynasty used the city to monitor and control their political rivals. A centralized government is necessary to organize large scale farming. Farming leads to economic growth which creates a class structure. The Religion is known for their traditional egg hunting competition. Islanders swam to the island of Motu Nui and competed to find the first egg of the season and bring it back to the main island of Orongo. Motu Nui seen from the Orongo This figure possibly depicts an echidna, an egg-laying mammal native to New Guinea and Australia. Carbon dates back to 1500 BC.

Captain James Cook charts the east coast of Australia onboard HM Endeavor, claims it as British possession and names it "New South Wales"

Transportation of convicts to Australia

Western Australia established as a settlement

British moves the last Aborigines of Tasmania to a small island where they are to die out
"Australia and Oceania - Oxford Reference." Oxford Reference - Answers with Authority. N.p., 24 Sept. 2013. Web. 06 Mar. 2017

Foundation of Adelaide, start of emigration

A site was chosen for Adelaide, the first colony that would not be a penal colony. Young married couples would travel there freely.
"Australia and Oceania - Oxford Reference." Oxford Reference - Answers with Authority. N.p., 24 Sept. 2013. Web. 06 Mar. 2017

During the Australian gold rushes, significant numbers of workers, both from other areas within Australia and from overseas relocated to areas in which gold had been discovered. he first gold rush in Australia began. in May 1851 after prospector Edward Hargraves claimed to have discovered payable gold near Orange, at a site he called Ophir. Australian gold rushes changed the convict colonies into more progressive cities with the influx of free emigrants. These hopefuls, termed diggers, brought new skills and professions, contributing to a burgeoning economy. The mateship that evolved between these diggers and their collective resistance to authority led to the emergence of a unique national identity. 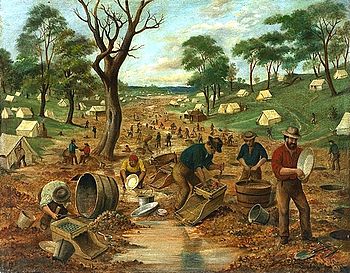 Australia Founded as a Nation

An Act of the Parliament of Australia which limited immigration to Australia and formed the basis of the White Australia policy which sought to exclude all non-Europeans from Australia. The law granted immigration officers a wide degree of discretion to prevent individuals from entering Australia. The Act prohibited various classes of people from immigrating and provided for illegal immigrants to be deporhttp://tlf.dlr.det.nsw.edu.au/learningobjects/Content/R3904/object/resource/ex73_003.jpgted.

The ‘White Australia Policy’ and also better known as the Immigration Restriction Act 1901, was introduced in the 1900s preventing people of non- European descent from migrating to Australia

New Zealand becomes independent as a self governing dominion (sovereignty)

This was the outbreak of World War 1. Four days after Austria-Hungary declared war on Serbia, Russia and Germany declared war on each other the same day. France than ordered a general mobilization. The so-called “Great War” that resulted in the deaths of some 20 million soldiers and civilians and the physical devastation of much of the European continent.

In 1929 the Great Depression began with the Wall Street Crash of October, 1929
Just as other nations suffered so did Australia-- suffering from years of high unemployment, poverty, low profits, deflation, plunging incomes, and lost opportunities for economic growth and personal advancement

Australia gov states, The Great Depression hardened community attitudes against immigrants. Racism surfaced under the guise of protecting Australian jobs and businesses. Anti-foreigner riots occurred on the Kalgoorlie goldfields in 1934. These were followed by strikes demanding preferential employment for Australian-born workers. Immigrants in the 1920s and 30s maintained contact, where possible, with families and homelands. This was especially important when many were made to feel unwelcome.

The US declares war on Japan. Australia turns to the US for help in its defence after the Japanese take Singapore. Australia allows the US to base its supreme command for the Pacific war on its territory.

Australia begins a scheme for immigration from Europe. Over the next 30 years, more than two million people arrive, about one-third of them from Britain, and hundreds of thousands from Italy, Greece and Germany. Neville Bonner an Australian politician becomes the first Aboriginal to be a Member of Parliament.

people from other countries were encouraged to come to Australia. Migrants have come from Asia, the Middle East and South America as well as Europe

In 1982, the Vietnamese Government agreed to let refugees leave Vietnam without persecution, freeing people to come to Australia to be with their families who had fled earlier. By 1985, 70,000 refugees from Southeast Asia, mostly Vietnam, had settled in Australia

There are a number of different types of Australian immigration, classed under different categories of visa.
Employment visas - Australian working visas are most commonly granted to highly skilled workers. Candidates are assessed against a points-based system, with points allocated for certain standards of education. These visas are often sponsored by individual States, which recruit workers according to specific needs. Visas may also be granted to applicants sponsored by an Australian business. The most popular form of sponsored working visa is the 457 visa.
Student visas - The Australian Government actively encourages foreign students to study in Australia. There are a number of categories of student visa, most of which require a confirmed offer from an educational institution.
Family visas - Visas are often granted on the basis of family ties in Australia. There are a number of different types of Australian family visas, including Contributory Parent visas and Spouse visas.
Investor visas - Foreign investors could invest the business or fund in Australia to acquire the Permanent Residential of Australia, after 4 years (including the year which acquire the visa), they need to take the exam and make a declaration in order to be a citizen of Australia