A timeline of events during the Intertestamental Period, occurring in Palestine, Greece and Rome, Egypt and North Africa, Syria and Turkey, and the Fertile Crescent.

Wars of the Diadochi

Ptolemy gets Egypt, Palestine, southern Syria
Seleucus get most of Asia Minor, northern Syria, Mesopotamia and remainder of eastern empire
Antigonids get mainland Greece, Thrace, and other territory

The Jewish community in Ostia is mentioned in an inscription found in Castel Porziano, to the south-east of Ostia. We hear of the [universitas] Iudaeorum [in col(onia) Ost(iensi) commo]rantium, and of the gerusiarches ("president of the elders") Caius Iulius Iustus. In the necropolis to the south of Ostia, on the Pianabella, the funerary inscription has been found of an archisynagogus, Plotius Fortunatus. Note that these Jews have adopted Roman names.

Palestine ruled by the Persians Zenon was the secretary to a finance minister of Ptolemy II

Palestine ruled by the Ptolemies

Antiochus sends army to put down riot and orders the suppression of Jewish religion.

Hyrcanus, Joseph’s youngest son, wins tax farming privileges from him when his father and brothers shift their loyalty to the Seleucids

Palestine ruled by the Seleucids

Onias III serves as high priest when his brother Jason paid bribe to Antiochus for high priesthood and to Hellenize Jerusalem. Onias III is deposed by Antiochus IV and replaced by Jason, who established Greek gymnasium education in Jerusalem.

Rebellion eventually led by the Maccabees

December: Maccabees retake the Temple and restore the cult. Antiochus withdraws his decree.

Treaty between Jonathan and Bacchides

Jews claim freedom from foreign rule, in theory but not reality

John Hyrcanus I serves as high priest ruling like king, but without title; makes independence real in 129/128

The Healing of Tobit by Bernardo Strozzi, 1635 Judith with the Head of Holofernes by Cristofano Allori, 1613

Dr. Lee Levine came forward in writing and in SBL sessions and elsewhere and made emphatically clear that there were indeed purpose built synagogues even in Jesus' day and thereafter, and that in fact the practice may well pre-date the Herodian era. One of the sites Levine most based his argument on was in the lower Golan Heights, at the village of Gamla, sometimes also called Gamala (from the Hebrew word for camel, because the hill on which the village rests looks like the hump, or perhaps the nose of a camel from a certain angle). As it turns out, Levine was absolutely and positively right. A little of the history of Gamla is in order, since it is not a city mentioned in the Bible.

The village seems to have begun as a Selucid outpost in the 2nd century B.C. where a fort was established as a sort of early warning signal for those living in the Holy Land. It seems to have begun to become a civilian settlement of Jews sometime later in that century. Bible readers may know this site if they have read Josephus' Antiquities, in particular 13.394 which recounts how Josephus himself, as a Jewish commander early in the Jewish war in the A.D. 60s fortified this outpost as one of his main lines of defense of Galilee from Roman attack. 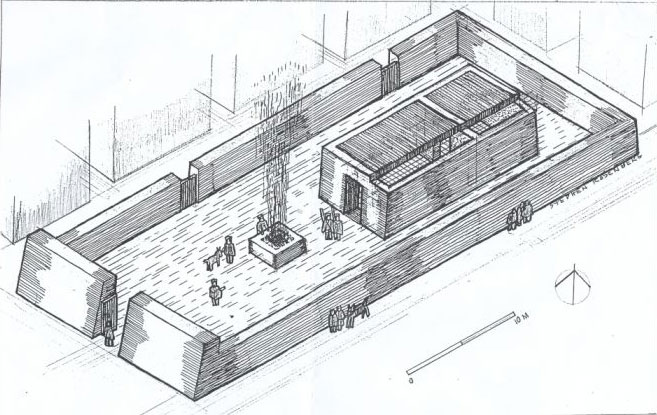 Translation of Torah into Greek