The Boer War, also known as the South African War, was a war that took place in South Africa and happened between the British and the Boers. The British controlled parts of Africa already and wanted to expand southwards. The Boers, early Dutch settlers, opposed the British. They thought the British were going to steal their land. The British were promising they wouldn't though. Since the British had gone to war, Canada was supposed to help support them. Most English speaking Canadians were completely okay with helping out the British, but the French Canadians thought that Canada shouldn't help and send troops. They thought the war had nothing to do with Canada and was too far away for Canada to be bothered. When the United States bought Alaska from Russia, borders along the northern coastline of British Colombia needed to be set. Both Canada and the United States wanted the most land possible and were also very interested in the inlets and land past the inlets. The inlets made it easier to access Yukon and gold country. A meeting happened between three Americans, two Canadians and one British to settle the boundary dispute. While this was going on, Britain was also dealing with a few border issues with the United States in South America. Not wanting to anger the US, Britain sided with the Americans and gave in to their demands. This angered most Canadians, both the English and French speaking ones. Canadians now wanted the right to make their own decisions not Britain deciding what's best for them. 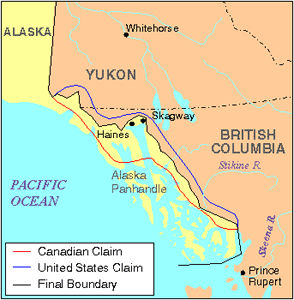 The addition of these two provinces gave more resources and land to the people who lived in Canada. There were already settlers who lived in what used to be part of the North West Territories and there were more and more immigrants coming over. The reason for this was that there had been advertisements for the land in these regions and many Europeans were immigrating to come and turn the land into farms. The inhabitants wanted to join Canada so they would have some form of government to help with the growing population. The joining of these provinces made Canada almost span all the way across, from sea to sea, not including Newfoundland. Newfoundland would later join Canada in 1949, filling in the last piece. During this time, the First Nations were still dealing with a lot of discrimination. The Canadian government was trying to assimilate the Native people into Canadian society. They wanted to do this to free up land for the government to use. Obviously, the First Nations wanted none of this and were trying to fight back. They wanted to keep their land, as it was rightfully theirs. They wanted to preserve their culture. The government was trying to stop this by setting up residential schools and forcing the Native children to attend. With the large amounts of immigrants coming in to Canada, the government needed more places for them to live and the First Nations felt threatened. They brought their complaints to the provincial and federal Canadian government with basically no success. Laurier suggested that they take their case to the British Privy Council. They did but Laurier was no longer Prime Minister by the time the decision had been made.
http://cdn.timerime.com/cdn-4/upload/resized/182141/2079504/resized_image2_d004c5e90ff302e080ab4b7b8cc95f5d.jpg

Canada usually relied on Britain to protect them with their navy. Germany had recently started to increase the size f its navy. Britain, feeling threatened, decided that they should improve their navy as well. They launched the first big gun battleship. Germany, being jealous, basically started a competition with Britain to see who's navy was better. Britain asked Canada to help make its navy better than Germany's. The English Canadians thought nothing of it and were all for helping out Britain. The French Canadians were more skeptical and thought Canada should be focusing on increasing its very own navy. They thought that Canada's navy could help out Britain in times of war. Laurier decided that the French Canadians' idea was good and introduced the Naval Service Act. This meant Canada would have its own navy but would help Britain in times of need.

The Chinese and Japanese immigrants had been living terrible discriminatory lives in Canada. They had been brought over and made to work on the Canadian Pacific Railway but once that had been completed they needed different jobs. The Asian immigrants were hard working and worked for less money than other Canadians. The employers encouraged the Asian immigrants to come because it meant they had to pay them less. The other Canadians felt threatened and were losing job opportunities to the Asian immigrants. They wanted the government to put a restriction on how many Asians were allowed to immigrate to Canada. Because of this, anti Asian riots happened to show the government their displeasure about the immigrants and to make the immigrants feel unwelcome.

A federal election was held in 1911, Wilfrid Laurier and Robert Borden were competing for the seat of Prime Minister. Robert Borden and the Conservatives won the election. This was unfortunate because under Wilfrid Laurier's control, Canada had witnessed a lot of improvement in many different way. Improvements in communication, transportation and population were some of the many things. The fact that Wilfrid Laurier was straying from Britain had many English Canadians voting for the Conservatives and not the Liberals. The sinking of the Titanic affected many people. It sank off the East coast of Canada. The sinking of the what was thought as the "Unsinkable Ship" caused a lot of distress among many countries. People were afraid of sailing and the ocean again. The Titanic had been over filled with more than 2224 passengers on board. More than 1500 of the passengers died in the sinking. On its maiden voyage, from England to New York, it hit an ice berg, opening some of its water tight compartments up to the freezing ocean. It took less than three hours for it to sink. 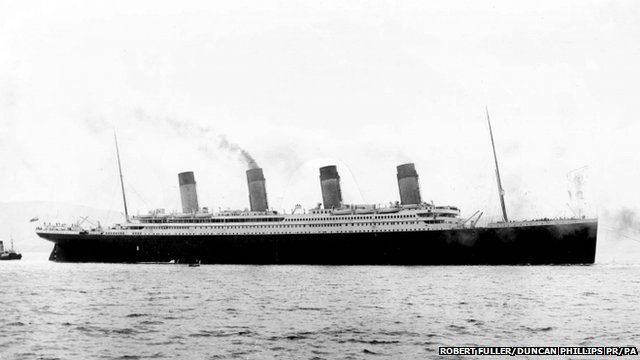 Advertisement for the "Last Best West"

The "Last Best West" was an area in Canada that for the most part wasn't very populated yet. The key word being "yet". The government wanted to change. So they launched a campaign to advertise the Prairies, now dubbed the "Last Best West", to make them sound better. The government wanted to attract white Europeans, ideally from Britain, but many Western Europeans, like Ukrainians and Russians. Other ethnic groups also came, like Asians and Americans. The Western Europeans were best suited for the Prairies because they were mainly farmers in their home country.

With all the advertising for the "Last Best West" the population of Canada was growing very quickly. The population had almost doubled between 1891 and 1921. A lot of the new immigrants were settling in the Prairies. A few decided to live in the Maritimes or British Columbia. They were coming because of their lives in their home countries. They wanted to start a new life in a new country, full of opportunities. Many Ukrainians, Asians, British and Americans were all coming to Canada to start over and find new wealth. The expert advertising for the "Last Best West" helped tremendously.