Made by Meghan Young

For these websites I rate them a 3.5/5, I got most of the information I wanted.

The reason why I think this event is important is because it ended the war of 1812 and made nations come to peace.

Many rebellions took place in Canada during the years of 1837 and 1838. Both rebellions were motivated by frustrations with political reform. Rebellions in Lower Canada began before the ones in Upper Canada. These rebellious acts started in November 1837. These rebellions where led by many leaders; such as Wolfred Nelson, Louis-Joseph Papineau, and Edmund Bailey O’Callaghan. The rebellions in Upper Canada were led by William Lyon Mackenzie and Charles Duncombe in December. Both Upper and Lower Canada wanted of mixed monarchy, which is a balance of monarchy, aristocracy and democracy. Some of the rebels were arrested in Upper Canada following the 1837 uprisings and were put on trial, with most being found guilty of insurrection against the Crown. Of these people, some were publicly hanged for their crime. I rate this website a 4/5. The information that I wanted was there and easy to find and understand.

The reason why I think this event is important is started to change Canada into what it is today. This event helped Canada to decide what way of government would work for its people.

Fraser:
The Fraser gold rush was one of the largest gold rushes in British Colombia. This gold rush was directly responsible for the early development of British Columbia. The first ship that arrived from the States was the side-wheel steamer “Yosemite.” 450 docked on April 25, 1858. Many more ships came, and by the end of the summer there was over 10,000 miners on the Fraser River.
Cariboo:
Gold was found in the area in 1858, but it was in 1861 when many people started to go to the Cariboo trying to find gold. It was being widely publicized at this time. Peter Curran Dunlevey discovered gold at Little Horsefly Creek. This helps start the Cariboo Gold Rush. In 1860, immigrants from Hong Kong came to the port of Victoria to mine, set up a business, or start restaurants. It is estimated that 6,000-7,000 Chinese immigrants had come to B.C. at this time.
Barkerville was one of the mining towns that was used and it is now a tourist attraction.

The reason why I think this event is important is because this helped B.C. greatly, financially and with population. This helped everywhere else realize that B.C. is a good place to live.

Colony of British Columbia is Created

The Colony of British Columbia was a crown colony in Canada from 1858 until 1866. This Colony did not include Vancouver Island and was approximately half the size of British Colombia as we know it today. B.C. was governed by Sir James Douglas from 1858–1864. James Douglas was also the governor of the Colony of Vancouver Island during his rule. He ordered the construction of the Cariboo Road at the time of the Cariboo Gold Rush. James Douglas’ successor was Frederick Seymour, who governed from 1864–1866. He inherited a government that was deeply in debt, and a restless population of British colonists demanding for a responsible government. After B.C. joined Canada he ruled B.C. from 1866–1869.
"The resolution of the Oregon Boundary Dispute whereby British interests, primarily the HBC, lost governance of all territory between the 49th Parallel and the Columbia River due to a sudden influx of American settlers was 8 years previous. The British colonial office responded to the new situation by establishing the mainland as a crown colony on August 2, 1858, naming it the Colony of British Columbia." (From http://en.wikipedia.org/wiki/History_of_British_Columbia#Entry_into_Canada_.281871.E2.80.931900.29)
https://www.bced.gov.bc.ca/bc150/rushtobc/images/sidebarimage.jpg
Information from:
http://en.wikipedia.org/wiki/Colony_of_British_Columbia_(1858%E2%80%9366)
http://en.wikipedia.org/wiki/James_Douglas_(governor)
http://en.wikipedia.org/wiki/Frederick_Seymour
I give these websites a 3/5, it was hard to fing all the information I wanted.

The reason why I think this event is important is because B.C. became a colony.

Many of the Native peoples got the Smallpox disease from contact with Europeans. Many Europeans developed an immunity to the smallpox disease. The Natives on the Northwest Coast got the disease from the people that where coming to the area for the Cariboo Gold rush. The outbreak started around Victoria, more than likely from trading with or the people from San Francisco, which had the disease in the spring of the same year. Most of the Natives that got the disease died, because this was a new disease to them and no one had an immunity to it. 80% of the Native people died. Even more bad things happened to the Native peoples due to the outbreak, the authorities authorized their homes to be destroyed, and the occupants were told to leave. As these people moved, they infected more people, mainly other Native Americans. This caused entire villages to die or the survivors to be homeless and alone. There was no one left to perform the burial ritual so the dead bodies were left in the street. It is estimated that 60,000 people died along the coast in 1882. Some of the European traders stole what was left in the villages and traded them, causing the disease to spread further. 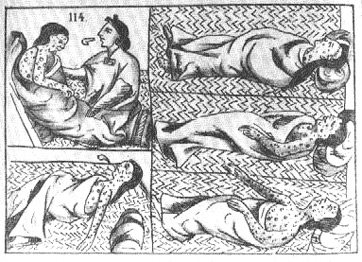 Information from:
Horizons Textbook page 221
I rate this source a 5/5, I all the information I wanted and it went into great detail. It was easy to understand.

I think this event is important because this was event nearly killed off the Native Americans in B.C. at the time. I felt like this is a good thing to know about.

Canada became a Dominion on July 1 1867. The Constitution Act, written in 1867, says: “Whereas the Provinces of Canada, Nova Scotia, and New Brunswick have expressed their Desire to be federally united into One Dominion under the Crown of the United Kingdom of Great Britain and Ireland, with a Constitution similar in Principle to that of the United Kingdom…” The Dominion of Canada included four provinces when it was formed: Ontario, Quebec, Nova Scotia, and New Brunswick. Canada took control of Rupert's Land and the North-Western Territory, and made it the Northwest Territories in 1870. The Métis' complaints led to the Red River Rebellion and the creation of the province of Manitoba in July 1870. Frank Scott theorized that Canada’s status as a Dominion ended when Canada declared war on Germany on 9 September 1939. The first Prime Minister was Sir John A. Macdonald, he ruled from 1 July 1867 until 5 November 1873. The holiday Dominion Day is now called Canada Day.

I think this event is important because this was the creation of Canada. Canada as we know it now started from here and it continued to change from that time to what we know today.

British Columbia and Vancouver Island joins the Dominion of Canada

British Columbia was I trouble economically after the collapse of the gold rushes. B.C’s residents also wanted a responsible government. The Confederation League, led by three future premiers of the British Columbia — Amor De Cosmos, Robert Beaven, and John Robson — helped push the colony towards this goal that many shared. These factors, plus the pressure to join the Dominion, caused the province to eventually join on July 20, 1871. Canada helped with B.C’s debt and promised to build a railroad to British Columbia within 10 years. The promise of the railroad became the most important reason for B.C. to stay with Canada. British Columbia did not demand for a railroad across the land as a condition of joining the confederation; its people expected a wagon road. The national government suggested the railroad as a substitute, with Ottawa and London viewing it as a way of connecting British Columbia and the Prairies with the rest of the British Empire. 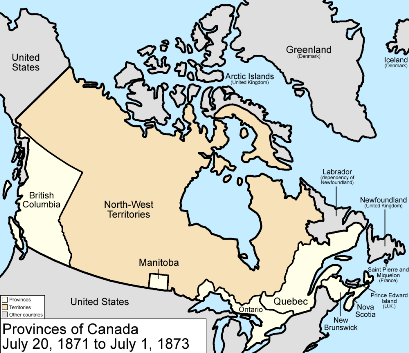 I think this event is important because this is a part B.C and Canada's history.

Wilfrid Laurier was the seventh Prime Minister of Canada and also was the fourth-longest serving Prime Minister of Canada. Laurier led Canada during a time of huge growth. There was a lot of industrialization at this period of time. Also many people were immigrating to Canada. Wilfrid Laurier was the first French speaking Prime Minister that Canada had. He is considered one of Canada’s greatest statesmen. He defended individual liberty, “Canada is free and freedom is its nationality.” One of the first things Laurier did was he proposed a compromise for the feud that was happening in Manitoba at that time. “The Manitoba legislature had passed a law eliminating public funding for Catholic schooling (thereby going against the federal constitutional Manitoba Act, 1870, which guaranteed Catholic and Protestant religious education rights)” (from http://en.wikipedia.org/wiki/Wilfrid_Laurier#Prime_Minister). He said that the Catholics in Manitoba could have a Catholic education system if there were enough students for the schools. In 1899, the United Kingdom wanted military support from Canada, but Laurier’s people were on different sides on this. The English Canadians demanded for military action whereas the French Canadians had a strong opposition. Laurier decided to send a volunteer force, forming a compromise.

Information from: http://en.wikipedia.org/wiki/Wilfrid_Laurier
I give this website a 5/5, I found all the information I wanted quickly and it was easy to understand.

I think this event is important because he was considered one of the best Prime Ministers.

The Titanic Sinks Off the Coast of Newfoundland

The Titanic was a British passenger liner that sailed on 10 April 1912. The RMS Titanic was the second of the three Olympic-class ocean liners—the first was the RMS Olympic and the third was the HMHS Britannic. It was one of the largest vessels of the British shipping company White Star Line’s fleet. Titanic’s passengers numbered around 1,317 people: 324 in First Class, 284 in Second Class and 709 in Third Class. The ship was constructed by the Belfast shipbuilders Harland and Wolff. This company had a long-established relationship with the White Star Line dating back to 1867. The Titanic was 882 feet 9 inches long. There was between 1,490 and 1,635 deaths due to this disaster. The captain, Edward John Smith, went down with his ship as well as most of the crew and the band. This event could have been avoided if they had listened to the warnings that was being given to them. The ship had received six messages from other ships warning of drifting ice, but the ship did not heed to the warnings and slow down. When the crew was trying to get everybody on to the main deck, many passengers took the orders as a joke, even when they were told to put on their lifebelts. This disaster could have been avoided.

I think this event is important because it was a tragedy that could have been avoided if people didn't think the boat was unsinkable and made sure that everyone could have been saved by having enough lifeboats.

Green are Allies, Orange are the Central Powers, and Grey are neutral.
Information from: http://en.wikipedia.org/wiki/Causes_of_World_War_I
http://en.wikipedia.org/wiki/World_War_I
I also got information from my Grandmother.
Both of these sources gave me the information I wanted but the website was hard to understand and some information seemed to contradict. When this happened I asked my Grandmother and she helped clear up my confusion. I give the website a 4/5 and my grandmother a 5/5.

I think this event is important because it was a huge changing point for the entire world. The world is a lot different now then it was then.