The "dandy horse", also called Draisienne or Laufmaschine, was the first human means of transport to use only two wheels in tandem and was invented by the German Baron Karl von Drais. It is regarded as the modern bicycle's forerunner. It had no pedals so the rider pushed the bike along with their feet.

The two wheeled design firstly designed by Thomas McCall of Scotland was later developed in the late 1960s, By french, Pierre Michaux and the 'Oliver brothers' to produce the first Pedal bicycle. That French design was sometimes called the boneshaker, since it was also made entirely of wood, then later with metal tires. That in combination with the cobblestone roads of the day made for an extremely uncomfortable ride.

The penny-farthing, also known as a high wheel, high wheeler and ordinary, was the first machine to be called a "bicycle".[1] It was popular in the 1870s and 1880s, with its large front wheel providing high speeds (owing to it travelling a large distance for every rotation of the legs) and comfort (the large wheel provides greater shock absorption). It became obsolete from the late 1880s with the development of modern bicycles. The term Penny Farthing came from Britain after the penny and farthing coins but the actual bike was invented in France.

The penny farthing rapidly faded out of production purely due to the production of the safety bicycle.Early bicycles of this style were known as safety bicycles because they were noted for, and marketed as, being safer than the high wheelers they were replacing, due to reduced height the rider could fall from.

A racing bicycle, also known as a road bike, and once popularly known as a ten speed, is a bicycle designed for competitive road cycling, a sport governed by and according to the rules of the Union Cycliste Internationale (UCI). The most important characteristics about a racing bicycle are its weight and stiffness which determine the efficiency at which the power from a rider's pedal strokes can be transferred to the drive-train and subsequently to its wheels. This style of bike is still very popular now.

Tom Ritchey built the first regularly available mountain bike frame, which was accessorized by Gary Fisher and Charlie Kelly and sold by their company called MountainBikes (later changed to Fisher Mountain Bikes, then bought by Trek, still under the name Gary Fisher, currently sold as Trek's "Gary Fisher Collection"). The first two mass-produced mountain bikes were sold in the early 1980s: the Specialized Stumpjumper and Univega Alpina Pro. In 1988, The Great Mountain Biking Video was released, soon followed by others. Mountain biking is still huge all over the world from California to the north of England. 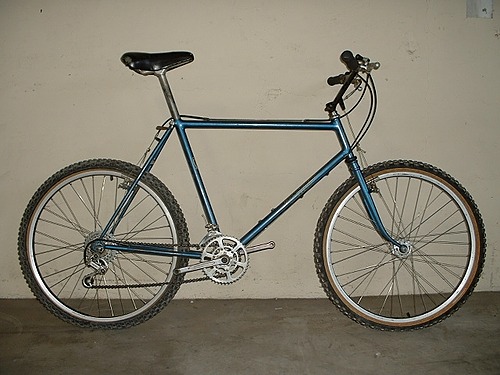 The Evolution of Bicycles