Causes of the American Revolution Timeline

The end of the war between the French and the Indians and the victory to Great Britain over the war of seven years in North America lands. The British gave to the American Natives the possibility to keep their lands and not being stripped of their belongings. By restricting the colonials of not going further than the Appalachians Mountains, however, this wasn't free at all this bring a cost that must be recovered, since the wealthy people of Great Britain didn't want to pay that debt, leading to the conclusion that the colonist had to pay it.

The sugar act knows by the act of cutting off the income taxis that the British had put on the merchant that import or export products like sugar and molasses to the new colonies on the northwest of America. This leads to a considerable amount of navies in the colonies to check and take care that taxes are being done properly and this action also added new taxis to new imported foreign goods like coffee beans, pimiento and certain wines. This was a great hit on the prices of the market, affecting the civilians and the merchants that work transporting these goods.

This applied from the British parliament to the Americans colonies, the quartering act the primary cause of this act it was to increase the revenue of the colonies in America, this was another rule that aimed to make colonies help out Great Britain with the cost of the war. Britain also decides to leave some of their troops to their colonies to help and take care that they also do their part for "their nation". Clearly, the colonists weren't happy of this move of the British, and they made it know well.

The British decided to add new taxis, over any kind of paper, this was implemented to help pay the cost of having soldiers protecting the American frontier, near to the Appalachians Mountains. Even though the amount that was being taxed for it was relatively small, however, the act of getting taxed in new stuff without their consciousness triggered them, since they couldn't fight back. 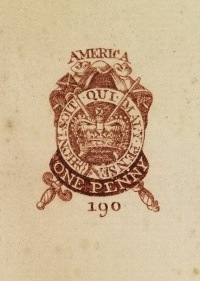 This was a violent mob protesting against the British soldiers, they were throwing rocks, sticks, tools and pretty much everything that was small enough to be thrown, soldiers were being beating up, therefore, they try to defend themselves and they started shooting to the Civilians generating a big amount of deaths.

The committees of correspondence were shadow governments organized by the national leaders of the 13 Colonies on the eve of the War of American Independence. The Maryland Committee of Correspondence was instrumental in putting in the primary continental congress, that met in Philadelphia. These served a crucial role within the Revolution, by diffusing the colonial interpretation of British actions between the colonies and to foreign governments. So this basically was the declaration and the start of a new country, since they have already established a big army, loyal criticizing and every goods they could need to keep expanding as a nation. They even make sure that nothing goes wrong in the future by getting rind of possible traitor and of the royal officials of British.

This was a significant event that was the mostly that impact to the cause of independence of Great Britain. in Rhode Island the group know as "Sons of Liberty" planned an attack and set fire to the ship. The British try to found the responsible and punish them but at the end they they didn't do much and no one was arrested. After a while of this event occurred the establishment of the permanent committees of correspondence led to the founding of the first continental congress and continually to the Declaration of Independence.

This is called the intolerable act since British didn't act to others misbehaviors of the colonials, except for this one, where 342 chests full of tea were thrown to the cost of the beach costing this a lot of money to the British company. British had enough and they decide for the first time to really punish them, the City of Boston didn't want to take any responsibility for the incident and clearly neither respond for the problem.

Members of the Sons of Liberty and Mohawk Indians were armed with axes, they quietly boarded three ships carrying cargoes of British East India Company tea. The decision of throwing the cargo of tea to the ocean was made to get the attention of the British and show they don't have to ignore them since the tea was one of the main sources of income because was the most sold drink between the colonist and British.

This was the first know meeting were the colonist could express themselves. This meeting occurred in Carpenter's Hall in Philadelphia, all colonist send their representative except Georgia. The colonies show they were united and determined tho show some authority to the British, but all of the colonies were aiming the same objective, some of the colonies wanted to work out a way with the British others were there to fight for their right and justice of them, also there were others who were ready to be independent of their country mother. Several days later, on the 20th, The Association, started to get to a reasonable and best solution. This was a pact for non-importation of English goods, to establish mechanisms throughout the colonies to enforce and regulate the resistance to Great Britain, and to keep the channels of communication open. It was to become effective on December 1, 1774 unless parliament should rescind the Intolerable Acts.