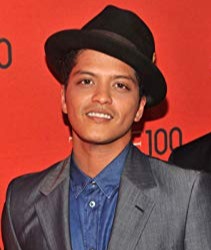 Peter Hernandez and Bernadette San Pedro Bayot, and was raised in the Waikiki neighborhood of Honolulu.
His father is of half Puerto Rican and half Ashkenazi Jewish descent (from Ukraine and Hungary), and is originally from Brooklyn, New York.His mother emigrated from the Philippines to Hawaii as a child, and was of Filipino, and some Spanish, ancestry. His parents met while performing in a show in which his mother was a hula dancer and his father played percussion. At the age of two, he was nicknamed "Bruno" by his father because of his resemblance to professional wrestler Bruno Sammartino.

The Love Notes, and became known in Hawaii for his impersonation of Elvis Presley.
In 1990, Mars was featured in the Hawaiian tabloid shopper MidWeek as "Little Elvis", and later appeared in a cameo role in the film Honeymoon in Vegas (1992). 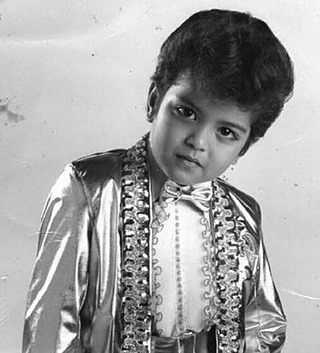 In 2003, shortly after graduating from high school at the age of 17, Mars moved to Los Angeles to pursue a musical career. He adopted his stage name from the childhood nickname his father gave him, adding "Mars" at the end because: "I felt like I didn't have [any] pizzazz, and a lot of girls say I’m out of this world, so I was like I guess I'm from Mars.

hortly after moving to Los Angeles, Mars signed a record contract with Motown Records in 2004, but the deal "went nowhere", leading him to have a conversation with will.i.am's management, which also turned out to be fruitless.
Before becoming a successful solo artist, Mars was an acknowledged music producer, writing songs for the likes of Alexandra Burke, Travie McCoy, Adam Levine, Brandy, Sean Kingston, and Flo Rida. He also co-wrote the Sugababes' hit song "Get Sexy" (2009) and provided backing vocals on their album Sweet 7 (2010.

After serving as guest vocalist on B.o.B's and Travie McCoy's singles, Mars released "Just the Way You Are" on July 19, 2010. The song was the lead single from his debut studio album, Doo-Wops & Hooligans (2010), and reached number one in the US, Canada, the UK, and several other countries worldwide. The song holds the record as the longest-reigning debut adult contemporary format hit, spending twenty weeks atop the Adult Contemporary chart in the United States 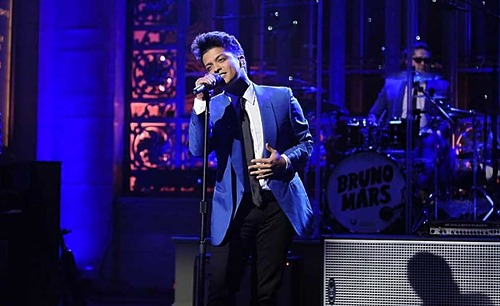 At the 2011 Grammy Awards, Mars won his first Grammy Award for Best Male Pop Vocal Performance for "Just the Way You Are" and received other six nominations for his work: Best Rap Song, Best Rap/Sung Collaboration and Record of the Year for "Nothin' on You"; the latter category along with Song of the Year for "Fuck You" by CeeLo Green, and Producer of the Year, Non-Classical as part of The Smeezingtons. 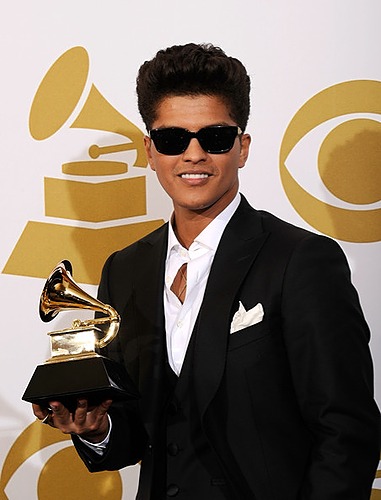 On March 22, 2012, it was announced that Mars had signed a worldwide publishing deal with BMG Chrysalis US.
Unorthodox Jukebox, produced mainly by The Smeezingtons, was released on December 11, 2012, and debuted at number two on the Billboard 200, but eventually peaked at number one on the chart.

The Moonshine Jungle Tour, from June 2013 to October 2014. He also announced a concert residency at The Cosmopolitan of Las Vegas in Paradise, Nevada. The tour grossed $156.4 million.

In May 2016, the singer split with his manager, Brandon Creed, as the latter sold half his management company. Mars took his business affairs under his own management company, Gorilla Management, operated by Aaron Elharar. In 2017, the corresponding edition of the Guinness Book of World Records recognized Mars as the "First Male Artist to achieve three 10-million-selling-singles".