France had three classes: the First Estate (the clergy), the Sound Estate (nobles), and the Third Estate (everyone else). The Third Estate paid almost all the taxes. They struggled to buy bread, while the nobles and clergy lived in luxury. Louis XVI was heavily in debt but could not raise taxes without the meeting of the Estates General. The Third Estate hoped it would be a way of listing their grievances. 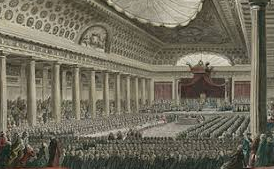 The Third Estate became angry after they were out voted (despite the fact there were more of them) in the Meet of the Estates General, which required them to pay even more taxes. On June 17, 1789, they renamed themselves the National Assembly. On June 20th, they found out that they had been locked out. They then moved to a tennis court and swore that the National Assembly would never dissolve until France wrote a new constituton.

Unrest was stirring up in the people of France, rumors spread among them. Finally, eight thousand attacked Bastille, a prison and armory that represented the king's power. The governor and his soldiers inside refused surrender. After several hours of fighting, the governor surrender, but the mob beheaded him. 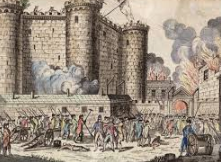 In August 1792, the National Assembly was replaced with the National Convention. France was already warring with Austria and Prussia when countries such as Great Britain, Holland, and Spain joined in. After the execution of Louis XVI, other monarchs feared the unrest would spread to their lands. After several defeats, middle class citizens were replaced with more radical members in the National Convention, who believed their cause was righteous enough to justify violence. Their leader was Maximilian Robespierre, the time under his guidance became known as the Reign of Terror. During this time anyone who was thought to support absolutism was arrested and executed. Even innocent people could be held without a trial and killed, some just died in prison. Ironically, Robespierre acted like a tyrant. He was executed by the guillotine on July 28, 1794, ending the Reign of Terror. The National Convention was once more ruled by the middle class, and they adopted a new constitution.

The Rise of Napoleon and Creation of a Empire

With economic and political problems, the Directory (the new government created by the new constitution) trusted an officer named Napoleon Bonaparte who gave France several victories. They believed they could manipulate Napoleon, however, in 1799 Napoleon overthrew the government. Since the time Bastille fell, the monarchs had been overthrown, peasants were given rights, and nobles no longer had special rights. Napoleon gained enough power to become a dictator. However, he improved the police department, schools, postal service, sewers, reformed the legal system and lifted the ban on religion, among other things. Napoleon defeated the Austrian forces and was able to make temporary peace with Great Britain. He gained land all over the continent. Napoleon claimed himself emperor in December of 1804. During the ceremony, he took the crown from the hands of the pope and placed it on his own head, showing he had power over everyone, including the church.

In 1803, Napoleon sold the Louisiana Territory to the United States, to pay for his wars. Napoleon planned to invade Great Britain but never did. In 1805, off the southwest coast of Spain, Britain defeated a combined French and Spanish fleet. Napoleon then decided to cut off Britains trade, but Spain and Portugal still allowed British ships in there ports. In 1807, Napoleon attacked the Iberian Peninsula (where Spain and Portugal are located). That drug on for five years (Britain aided the Spanish) depriving Napoleon of troops. Russia had agreed to cut off trade with Britain, but Tsar Alexander I (the ruler of Russia) decided against it in 1810. Napoleon wanted revenge, so he assimilated the people he had conquered into his army. This included Germans, Dutch, Swiss, Italians, Poles, and Lithuanians. He gathered over six hundred thousand troops and invaded in June 1812. Every time Napoleon attacked, the Russian force pulled back, burning their own supplies and villages. They did this so that there would be nothing left Napoleon's troops could use. Napoleon's troops marched into Moscow when a fire started burning two-thirds of the city. The Russians re-enforced their army and refused to surrender. Realizing that they could not survive the harsh Russian winter, Napoleon retreated on October 18th. Fewer than forty thousand survived due to starvation and disease, many deserted. Some were killed or captured by the Russians when they fell behind. Austria, Britain, Russia, Sweden, and Prussia made an alliance. They want to destroy Napoleon while his forces were weak. They drove Napoleon out of Germany in 1813. In 1814, the alliance made its way to Paris, forced Napoleon to surrender, and exiled him from France. They gave him a small unimportant place to rule called Elba, northwest of Italy. Napoleon made his way back to France with a thousand followers and gained the people's support. Napoleon's plan was to raise an army and attack British and Prussian forces (at a town called Waterloo, now in modern-day Belgium) before they could unite. The Duke of Wellington commanded the British troops and became victorious with Prussian reinforcements. Napoleon went to the Atlantic coast of France and surrendered to the British. He was then exiled to St. Helena, a small island in the Atlantic Ocean. 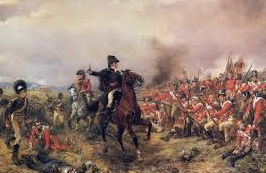 Russia, Britain, Austria, and Prussia met in the city of Vienna. Major European power met to stabilize the ruins of Napoleon's empire, secure their positions of power (prevent more revolutions), and prevent France from raising up again. They gave the throne to the brother of Louis XVI, Louis XVIII. The monarchs of Russia, Prussia, and Austria split some of Napoleon's fallen empire and did their best to eliminate the ideals of the French Revolution.