Rise of Napoleon and Creating an Empire

Born in 1769, Napoleon was brought up in schooling. His father sent him to military school when Napoleon was nine. At age twenty-four, he was advanced into the French Army. He was promoted to brigadier general. In 1795, he helped put down uprising royalists in Paris. Within a year, he was in command of French troops in northern Italy, where he showed his military brilliance and won the devotion of his troops. He then returned gloriously to Pairs. He later joined a coup in 1799 that overthrew the Directory. Napoleon took place of the directory, along with two other man. The man were supposed to have equal power, but it was clear that Napoleon was in charge. He gained more and more power and ruled France as a dictator. He said his goal was to stabilize France, and he did restore order.

This stability and peace did not last long. Napoleon became a consul in 1799. France was at war with European nations. This fighting lasted for sixteen years. At the head of his army, Napoleon won multiple victories throughout the continent. These battles were known as the Napoleonic Wars, and his army was called the Grand Army. In December 1804, Napoleon declared himself as emperor. 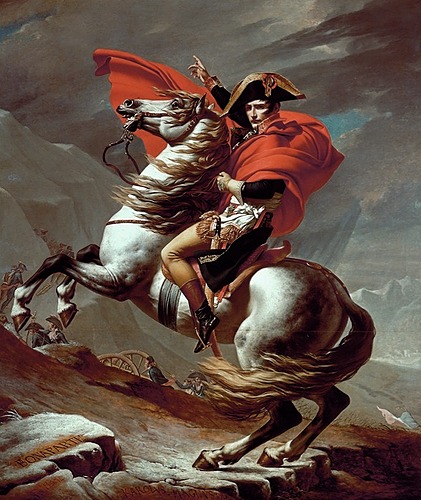 Storming Bastille and The Beginning of the Revolution

The National Assembly continued meeting. The King didn't seem too bothered by it, but the people of France, fueled by the Assembly, were getting angry at the King. The King decided he had enough and ordered thousands of soldiers to attack the Assembly. With fear of death, about eight thousand Parisians seek to arm themselves. They decided to storm the armory, known as the Bastille which currently served as a jail.

The Governor of the Bastille, backed by one hundred guards, refused the admittance of the people. Violence and gunshots broke out. After hours of fighting the people stormed the Bastille, and the Governor's head was on a pike.

This caused a widespread of panic, known as the Great Fear. Fed by rumors of invading armies and the King conspiring to destroy the Third Estate, peasants fought back. They destroyed manors and important documents. So began the French Revolution. 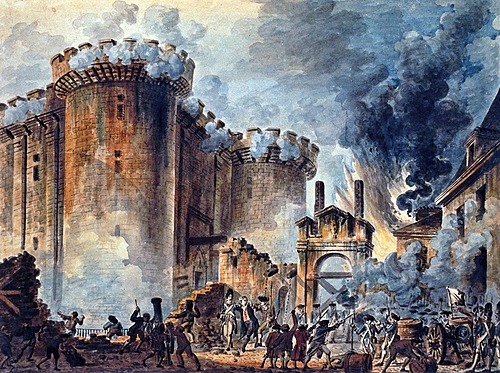 On June 17, 1789, the Third Estate gave themselves a new name. They would be called the National Assembly.

On June 20, the National Assembly went to a meeting, but the hall they were going to use was locked up. They moved the meeting into a indoor tennis court. There they took an oath that would be known as the Tennis Court Oath. The oath stated that they would never disband until they made a new constitution for France. 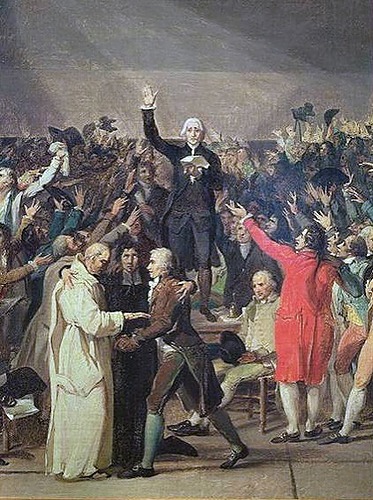 With intentions of raising taxes, King Louis XVI called a meeting of the Estates General. After one-hundred and seventy-five years, the three Estates would meet.

However there was a problem. The Third Estate was frustrated with this meeting. They could only have one vote, which meant they could be overruled by the Second and First Estates combined, two to one. In June 17, 1789 the Third Estate took a bold step to change things. 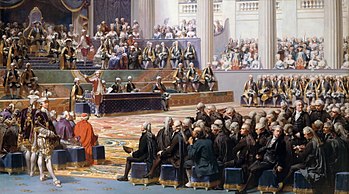 In 1792 the Terror had arrived. Robespierre and his supporters didn't trust anyone. They ordered police to arrest anyone who seemed suspicious being a supporter of the enemy. They would be tried and if guilty commend to death. Beheaded by guillotine. Tens of thousands were sent to the guillotine. Thousands more were killed without a trial or died in prison. Among the victims of the Terror were the former queen, Marie-Antoinette. Also killed was Georges Danton, one of the first leaders of the Committee of Public Safety. 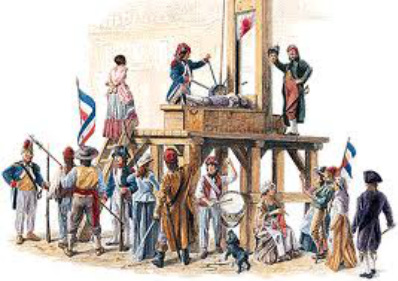 Previously allied with Napoleon, Russia's ruler supported Britain with trade. To teach them a lesson, Napoleon raised an army of six hundred thousand troops. Knowing that they could not defeat Napoleon head-on, Russia pulled back troops. Napoleon was forced keep marching through the freezing cold. Russian troops burned and destroyed there own villages so Napoleons army could not get more supplies. Starving and freezing, these conditions started to kill Napoleon's men. Finally in October 18, Napoleon ordered a retreat. Out of the six hundred thousand, fewer than forty thousand returned.

Weak from his current lose, European powers joined together to attack. They forced Napoleon's troops out of Germany. In the following year, they invaded France forcing Napoleon to give up his crown. He was exiled from France, but given the tiny island of Elba to rule over.

After ten months, Napoleon returned to France. He gathered supporters. Alarmed by his return, these European powers prepared to invade France. Before they could, Napoleon attacked. He targeted two armies, on British, the other Prussian, near the town of Waterloo. He attacked, but the British troops pulled back. They waited for there Prussian reinforcements. Once they arrived, Napoleon knew he lost. Waterloo marked his final defeat. He surrendered and was exiled to St. Helena, where he lived out the remaining six years of his life. 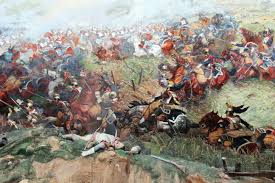 While Napoleon was living out his life on St. Helana, representatives of the European powers met in the city of Vienna. This meeting was called the Congress of Vienna, here these European powers discussed how they would rebuild the continent of Napoleon's ruined empire. They didn't want anyone to upset their powers and they didn't want anymore wars. They decided that France should once again be ruled by a king. The throne was given to Louis XVIII, the brother of the executed Louis XVI. The European powers divided the continent up among themselves. 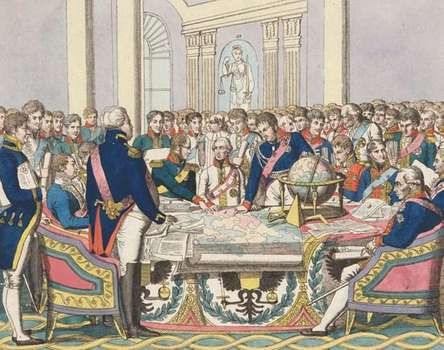