He is looking for Hae

02. Jay forgets to buy a birthday gift for his girlfriend, Stephanie, so Adnan helps Jay pick something out at the mall

03. Jay then drives Adnan back to school

04. Adnan leaves his cellphone in Jay's car and tells Jay he will call him

05. Jay goes back to his friend Jenn's house waiting for the call to come

06. Later that afternoon, Jay calls Adnan at Best Buy and tells Jay to come get him

According to Jay, Adnan calls him from a telephone booth. However, there's no record of this telephone booth ever existing. In a picture of the store from 2001 the telephone booth isn't there, blueprints from the store in 1995 don't indicate a phonebooth being there, and there are no records of service agreements between Best Buy and a service company. So...how would Adnan have called Jay if Jay had his phone?

07. They both leave the parking lot (Adnan's driving Hae's car with her body in the trunk and Jay's driving Adnan's car)

08. They ditch Hae's car at the I-70 Park and Ride and leave the body in the trunk

09. After they ditch the car, they "tool around" Baltimore Country together

10. After a while, Jay drives Adnan back to Woodlawn High School for track practice

13. They drive around some more

By this time, Hae's family is worried and they had called the police. The police reach out to a couple of Hae's friends including Adnan

15. Jay and Adnan drive to Jay's house to get some shovels and go retrieve Hae's car from the park and ride

16. They go to Leakin Park where Adnan and Jay bury Hae

Jay says that Hae was with another guy which made Adnan very angry. According to Jay, Adnan said "I think i'm going to kill her."

Jay was blackmailed by Adnan

Jay's first interview with the detectives

When Jay was brought in for questioning, he was questioned off-tape for an hour before it was recorded

Jay's second interview with the detectives

Jay's drawing for the detectives of the Best Buy parking lot 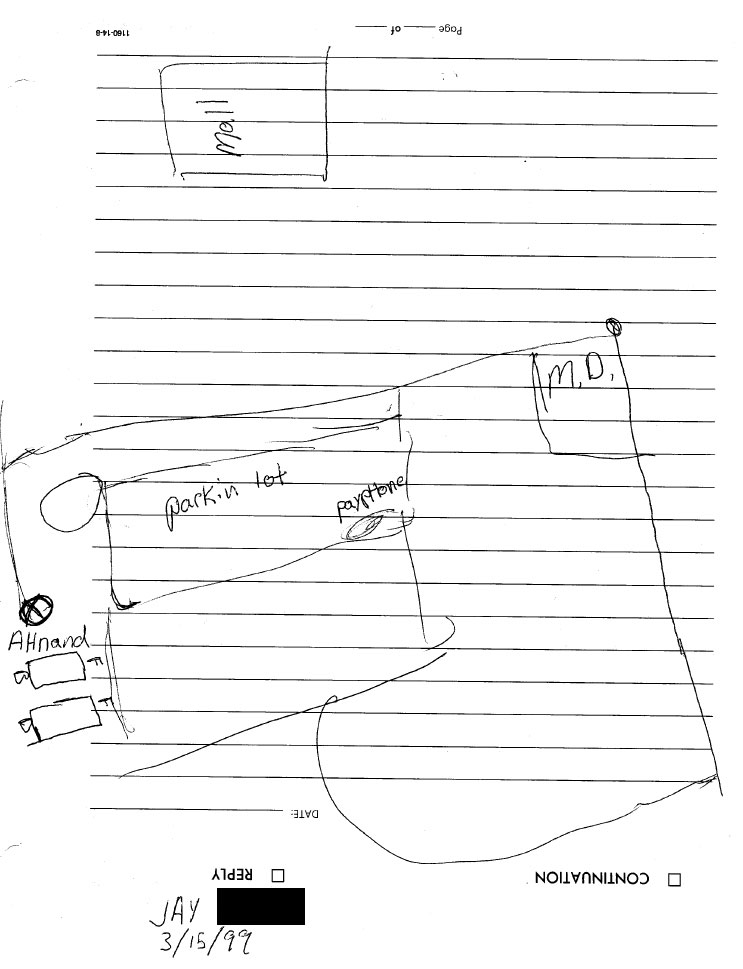 Adnan Goes to the Library before Track Practice

Adnan calls Jay and offers to give him his car.

Adnan said he went to the Woodlawn Public Library and has a conversation with Aisha. This is when the murder was said to have been carried out. 2:15-2:30

Adnan shows up at Psychology Class 1:27

Claims he never made the Nisha phone call

Adnan calls Jay from a phone booth at 2:36 for five seconds. There is no proof this phone booth existed, but the call record given by the cell tower of this call is what won the case. HOWEVER in the blue print it says there is a phone booth. 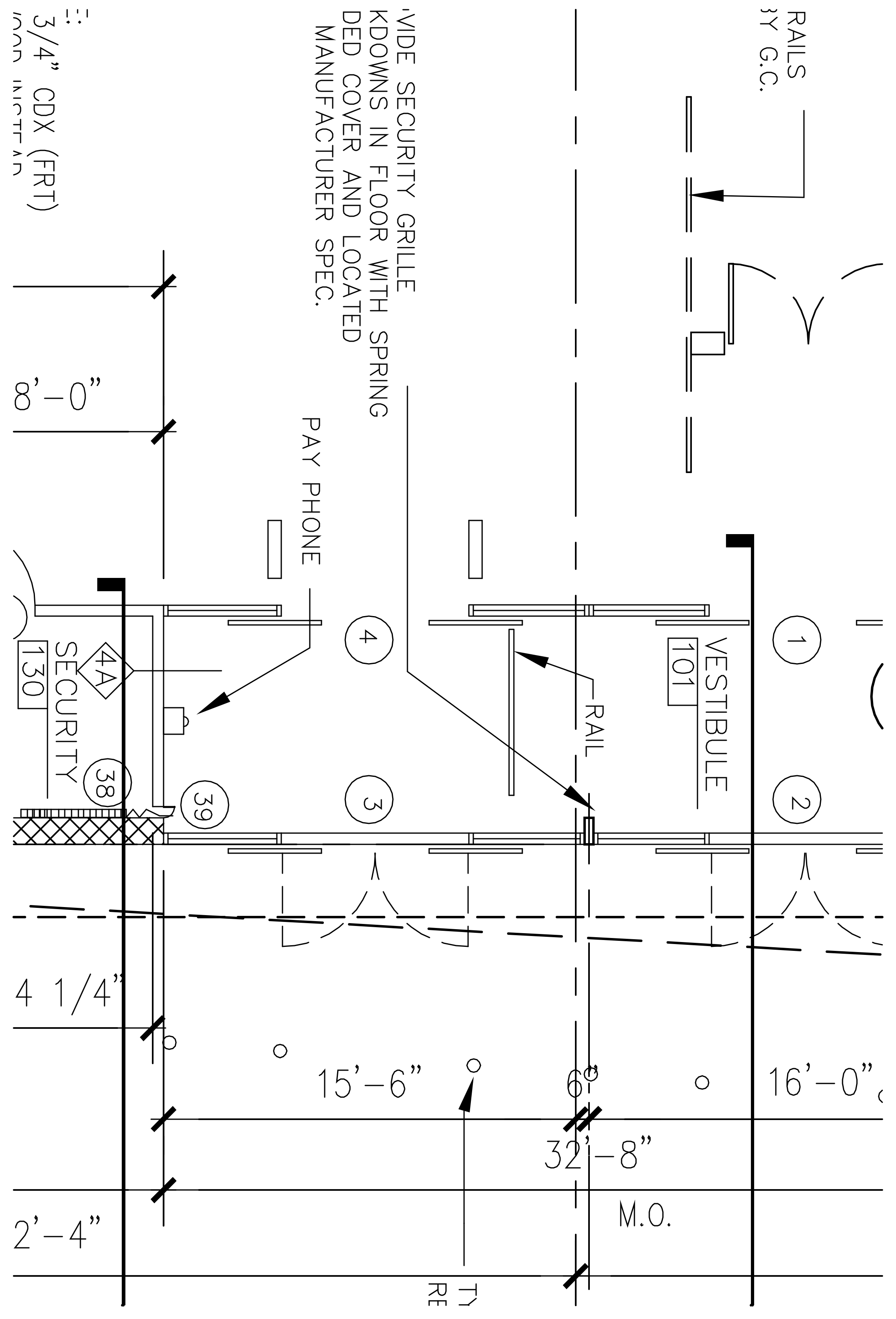 On New Years Day, Hae has her first official date with Don and they start going out.

According to Chris, Jay tells Chris he wants to stab him to show him how it feels like to be stabbed

Laura says a "Neighbor boy" tells her that he just saw Adnan with a dead body in the back of his car. Laura tells her dad Dave who files a police report saying, "“My daughter just heard something about a dead body” “It was the neighbor boy who had mentioned it”. What is weird is that the police never file the report until April 28th, 2 months after Adnan is in jail. But Laura says they filed it on the day Hae died. 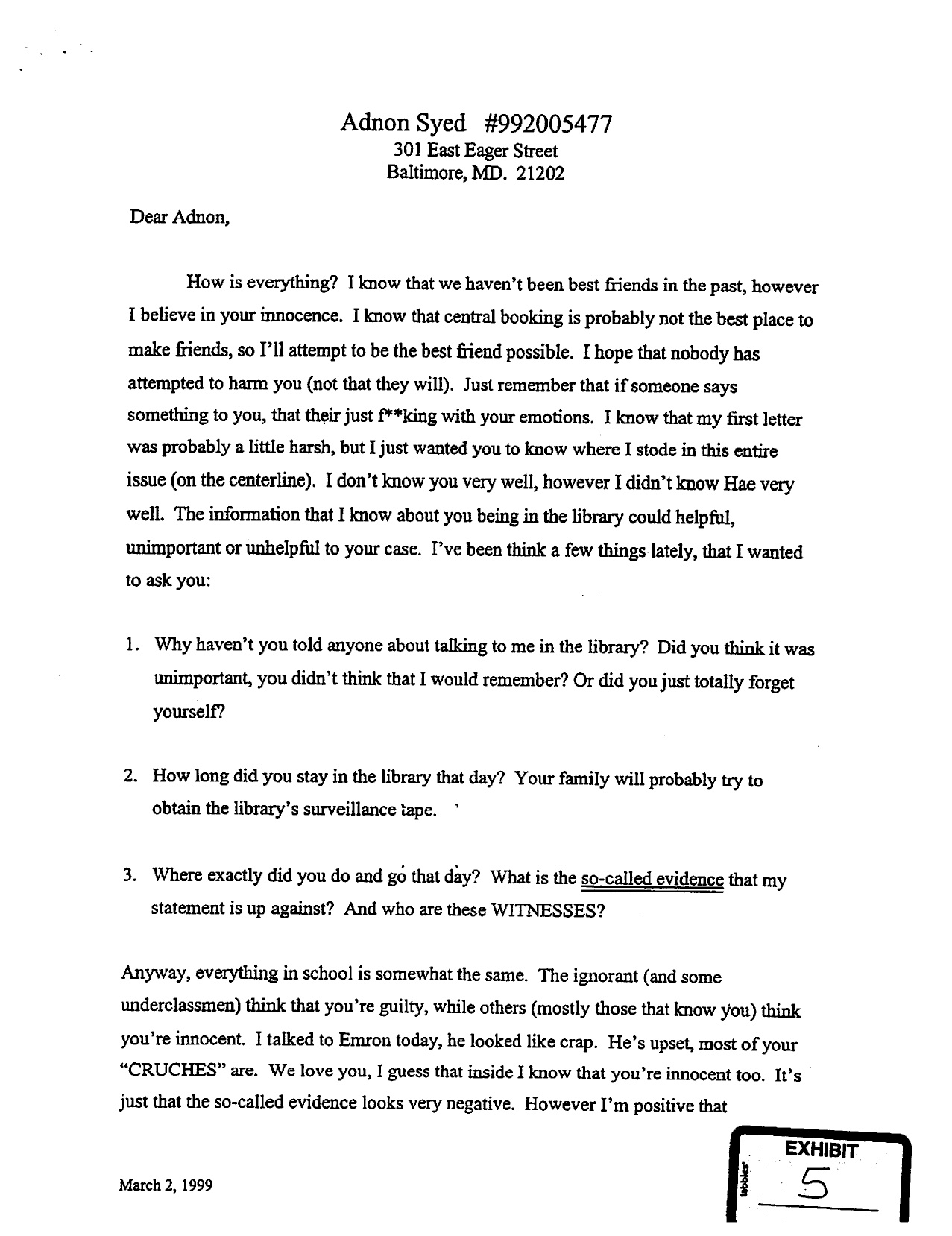 Asia is only one who can testify to Adnan's alibi, yet nobody contacts her about it. Asia's missing testimony inspires a retrial.

Jay and Adnan are at Cathy's

Jay and Adnan go to Cathy's to hangout. Jay says this was after he picked up Adnan from track at 6'oclock. Cathy says it was weird that they showed up because she isn't friends with them. Adnan didn't talk the whole time and seemed strange. He got a suspicious phone call and then went into the car for a while and then left with Jay. Jay was wondering how to get rid of a high because he has something important he needs to do.

Sara received an email from Hai’s friend Summer about her death. Summer said that it is impossible that Hai Leigh was at Best Buy at 2:36, because there was absolutely no reason for her to be there at that time. Summer also tells Sara that Hai had said that she would make it to their wrestling match on her own (i.e. drive her car). This happened during their discussion about going to the match together; Hai had decided she was not going to catch the bus. However, Hai never made it to the wrestling match.
Although Summer spoke to Sara about the time that Hae went missing, she had never spoken to the detectives about it. The last call on file revealed that Hai was in the parking lot of the Wood Lawn High Library at 3:15pm. In the midst of Hai missing, Adnan was very panicked after receiving a call from Crista, Hai’s good friend, about her missing. This made Adnan even more upset, especially when he found out that she told the cops to speak to him.

Mr. S says that he had to go to the bathroom, while he was he found Hae's body. He was also drinking at this time and far away from his car. His story seems sketchy and they don't fully believe him.

Random caller told the police that a year ago Adnan informed his friend “Vasser Ali” that “if he ever hurt his girlfriend, he would drive her car into a lake.”

Detective as well as most people are really unsure on the correct story of Jay because he isn't consistent when describing his view.

In this episode of the podcast, Koenig also talks to detective Jim Trainum, a detective who works with pulling apart false confessions, however he was skeptical of some aspects in the case at well, one of them being the inconsistencies in Jay’s entire story. Trainum states, “But what I’m saying is this: the mechanics, the documentation, the steps that they took, and all of that, they look good. Okay? I would have probably followed this same route. However, what we’re unsure of is what happened to change Jay’s story from A to B, and we do not know what happened in the interrogating– those three hours and that will always result in a question as to what the final outcome should have been.”

At the first trial, Jay says they both got high in Adnan's car, but the second trial, he says only he smoked and Adnan didn't want to.

DNA swabs and investigating was all very strange. Never tested the fibers on Hae or objects around the crime scene.

Don, Hae's boyfriend, should be looked at

an e-mail, in 2008, from the Baltimore Police, saying that he believes items from this case have been destroyed, but he doesn’t have a document saying that that is true.

Fibers on Hae were never tested

In the first interview, Jay says Adnan only told him that same day that he was going to kill Hae. Two weeks later, Jay says that Adnan had started talking about it beforehand,four or five days before

In the first interview, Jay says they're at a restaurant when Officer Adcock calls Adnan asking if he's seen Hae. The next time he tells it, he says they are at a friends house

In the first taped statement, Jay says he refused to help dig a grave for Hae. Two weeks later, he says they both dug the hole.

There's a call at 4:27 on the log, but it doesn't ping near Woodlawn. Plus, according to the detective, they were supposed to be at Patapsco at this time.

Jay says Adnan asked for help with the murder on the 12th. But, by the time Jay testifies at trial, he goes back to the first version again – that he knew nothing until the day of.

Jay tells the cops that it takes him about fifteen or twenty minutes to get to the Mall in Edmonson, but it is It's just a few blocks from where they ditched Hae's car

Never tested the DNA on the alcohol bottle

There's a whole side trip where Adnan and Jay supposedly take that afternoon, after Hae's been killed to smoke some weed at Patapsco State Park. That trip disappears by trial

When Jay was brought in for questioning, he was questioned off-tape for an hour before it was recorded

Initially, Jay says he and Adnan went to the Westview mall,but in a second interview,Jay says they went to Security Square Mall

Feb 28th the cops first bring Jay in
Talk to him for an hour before they turn the tape on
Then, on March 15th, the second interview. Jay signs his initials to an official explanation of rights form at 3:15 p.m. Then the tape starts.
6:20 p.m. So from 3:15 to 6:20, three hours have gone by since Jay signed that form. This is what’s called the pre-interview, and Trainum says, that’s where the mischief can happen.