History of The Atomic Theory

Theorized that matter could be divided there was the smallest and indivisible piece. His theory stated that (1) everything was composed of atoms; which were indivisible, (2) between atoms were empty space, (3) atoms were indestructible, (4) atoms will always be in motion, and (5) there was an infinite number of atoms that differed in size and shape. At this time in history there was no technology to help prove his theory, so it was ignored and forgotten for nearly 22,000 years.

Dalton agreed with Democritus's theory, and created his own theory of the atom. His theory stated that (1) all matter was made of atoms that were indestructible, (2) all atoms of a given element were identical and those of different atoms were different, (3) compounds are formed when two different types of atoms combine, and (4) in a chemical reaction atoms are rearranged, not created or destroyed. Dalton believed the atom looked like a hard solid sphere, but there was still no technology to prove his theory. His theory, however, was more accepted than Democritus's theory. https://lh5.googleusercontent.com/HTeC8xbyjrgpTHckdVAHoGG9jMoqO3g4jow4MeDLmiz9dHc1tIDXdNEc5OXIM1yWZopH-KlfE3sWy-CJWtaO90kw18G0XBbZgB1pew0Bm4phXuFElhk

Rutherford performed the Gold Foil Experiment. During this negatively charged particles were shot at a sheet of gold foil approximately 8.6*10-6 centimeters thick. According to the plum pudding model of the atom all particles should have passed straight through, but Rutherford found that some deflected off the foil.He found that 1/20,000 deflected 90 degrees or more, and occasionally some would deflect straight back. This led Rutherford to believe that the atom was more than just empty space with scattered electrons. Since some particles deflected there must be positive particles in the atom, and since only few bounced back then the atom is mainly empty space. Rutherford concluded that the atom must have a positive center that contains most (if not all) the mass, he named this the nucleus. http://www.thestargarden.co.uk/Images/Atoms-Rutherford.jpg

Millikan performed the Oil Drop Experiment, where oil droplets are sprayed into the upper portion of a closed chamber with two parallel metal plates. Light is shown into the chamber to illuminate the oil droplets so that they can be viewed through the microscope. Radiation was then put between the plates and the electrons attach to the droplets. The mass of the droplet can then be determined by how fast or slow it falls. By adjusting the voltage between the plates, Millikan found where the amount of upward electrical force equals the downward force of gravity, or where the drops stay suspended in air. Millikan found that the oil droplets was always a multiple of 1.602*10-19 coulomb: the mass of a single electron. Through this experiment, Millikan was able to determine the charge and mass of a single electron.

Bohr combined Rutherford's nucleus and Planck's theory about Quanta to explain what happens inside an atom and to create a picture of the structure. He created the Atomic Model (Bohr's Model) which showed the atom having a small positively charged nucleus with orbiting electrons. Bohr was the first to discover that electron's travel in separate orbits around the nucleus and that the number of electrons in orbit determines the property of that element.

Schrodinger used mathematics to find the likelihood of finding electrons in a certain position. He then used his findings to create the Quantum Mechanical Model. Unlike Bohr's model, there was no definite path for the electrons, but predicted the odds of the locations of the electrons. The model showed a nucleus surrounded by electron clouds, the more dense clouds carried more electrons while the electrons were less likely to be found in the less dense clouds. Schrodinger's model introduced sub-energy levels. http://byjus.com/chemistry/wp-content/uploads/2016/01/6d9e8506-1ebb-4992-8b61-9001505e5c51.png

Heisenberg used mathematics to calculate the behavior and pattern of electrons. He used this to form the Uncertainty Priniple that states electrons do not travel in neat orbits. He also used quantum mechanics to interpret the behavior of elementary particles and atoms. He clarified the modern view of the atom, and helped create the Electron Cloud Model. This model had "clouds" surrounding the nucleus where electrons were spread out and freely moving around. http://regentsprep.org/regents/physics/phys05/catomodel/cloud.gif

Chadwick was assigned to find Rutherford's "proton-electron pair", or neutron. He noticed that the atomic number (equals the number of protons) was less than the mass which meant that there was something else in the atom adding mass but not adding a charge. He proposed that Rutherford's neutrons were adding the mass, and that the neutrons had about the same mass as electrons but had no charge. 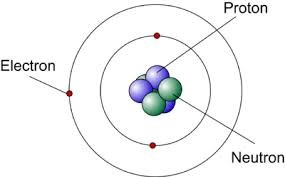