Egypt and the Pyramids

The Ancient Egyptians begin to construct the first of their Pyramids. They were built as elaborate burial tombs for the early Pharoahs, (rulers) of Egypt.

The first Olympic Games are held in Ancient Greece. Men would come from all over Greece, and beyond to compete in an athletic tournament. The games were held in honour of the greek of Zeus, who according to Greek mythology lived on Mt. Olympus. 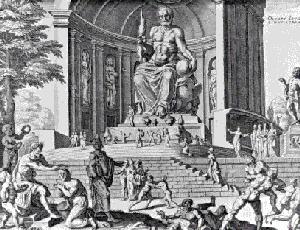 An early form of democracy begins to develop in the Ancient Greek city-state of Athens. Athens had been ruled by the dictator Draco, who passed many harsh punishments for minor crimes (this is where we get the word draconian!)

Athenian democracy allowed all citizens to vote directly on matters that affected the city. However, citizenship was restricted to a third of the Athenian population: land owning males.

Qin Shi Huang, leader of the central Chinese state of Qin united the warring states of of China into a single Empire. The Qin dynasty established many legal and political reforms that would set China up to become a great power. The Assassination of Julius Caesar

After announcing himself Dictator for Life, the Roman General Julius Caesar is stabbed in the back by members of the Senate, who wanted Rome to stay as a Republic. After several years of termoil, Caesar's adopted son, Octavian, is crowned the first Emperor of the new Roman Empire, and changes his name to Augustus (Fun fact: The months July and August comes from Julius and his son).

The first Emperor of Rome, Augustus, captures Egypt, who was at the time ruled by Empress Cleopatra. The Roman province of Egyptus is established, and becomes ruled by a governor appointed by the Emperor.

In 64 AD, a great fire destroyed much of the city of Rome. The Emperor at the time, Nero, was thought to have planned the fire in order to remake Rome again in his own image. In order to combat these allegations, Nero blamed the fire on the small Christian community, and began persecuting them. This often involved cruel forms of torture.

Christians are put to death in front of crowds at the Colosseum.
http://s3-eu-west-1.amazonaws.com/lookandlearn-preview/M/M000/M000436.jpg

An earthquake hits the Middle Eastern city of Petra. Much of the city was actually made up of buildings carved into the cliff faces. Although much was lost, some of these beautiful 'buildings' still survive today.

After suffering from years of internal corruption, the Roman Empire started to disintegrate. The Empire got too big to maintain, and was split down the middle. The Western Roman Empire would fall to invasions of 'barbarian' (meaning: foreign) tribes. However, the Eastern Roman Empire would continue on for another 1000 years, with Emperors ruling from the city of Constantinople. This became known as the Byzantine Empire, and would preserve a lot of the art, literature and political systems of the old Roman Empire.

Arthur's victory of the Saxons

Although there are few historical records, some stories are preserved. These tell of a native Briton King called Arthur (the Britons were a Celtic tribe) who fought and won a battle against a Saxon King. The story of King Arthur also involves dragons and wizards, getting accurate historical data is difficult.

William the Conqueror was ruler of Normandy, a region in the north of France. He believed he had a claim to the Crown of England, then ruled by the Saxon tribe. He launched an invasion of England, sailing across the English Channel. William won the Battle, and the Saxon King Harold was killed. The Kingdom that William established would eventually evolve into medieval England. The Normans spoke French, and this played a big part in the evolution of the English language.

Responding to a call by Pope Urban II, the Christian nations of Europe launch the First Crusade to recapture the Holy Land from the Muslim Saracens. The clash of cultures would have a large impact on the art, ideas and stories taken back to Europe by returning crusaders (knights).

The Mongols were a tribe from the vast, barren lands north of China, today known as Mongolia. In 1205, Genghis Khan, ruler of the Mongols, began an invasion which would take six decades to complete. Mongols were a controlling presence in China from 1205-1368 AD.

Gothic architecture began to emerge in the 11-12th centuries, and was common all over Europe. Cathedrals, castles, town halls and other important buildings were built in imposing new ways. The Conquest of Ceuta

At this time, Portugal was a growing power. Their King was known as Henry the Navigator for his keen interest in ships, sailing and exploration. He helped Portugal develop into a naval power in the Atlantic Ocean and the Mediteranean Sea. The capture of the North African city of Ceuta from the Moors increased Portuguese dominance in the region. This leads to the Dutch becoming expert fishermen and controlling the industry in the North Sea. A patent is defined as: "a government authority or licence conferring a right or title for a set period, especially the sole right to exclude others from making, using, or selling an invention."

The first of these specific government licences was given to an inventor in the Italian city-state of Florence. The man, Filippo Brunelleschi, was given this special licence so no one else could copy his invention: a special gearing system used to lift marble onto barges to transport. This is the beginnings of modern patent law.

Joan of Arc is burnt at the stake

After rallying a dismayed French army to fight back against the English invasion of France, the peasant girl who became a warrior was captured by the English. Joan was accused of being a witch, and was burnt at the stake.

The Inca tribe, who lived in what is now Peru in South America, began to overpower other tribes in the region. The Inca Empire was an elaborate system of alliances and tributaries (smaller tribes who pay 'tributes' to the larger ones), and covered vast and mountainous regions and many different cultures. The Inca Empire declined after several hundred years, and was finally decimated by the arrival of Spanish colonisers in the 16th century (1500s).

After surviving over 1000 years, the remnants of the Eastern Roman Empire finally began to crumble. The city of Constantinople had been renamed to Byzantium. This was the centre of the great Byzantine Empire, which was a centre of learning, and lay between Western Europe and Islam both culturally and geographically for much of the Middle Ages. By 1453, the Empire was reduced to the area surrounding Byzantium: that was all.

The Ottomans were a Turkish tribe which had been launching invasions of Byzantine territory for centuries. By 1453 they had the gates of Byzantium surrounded, and the city finally fell. The city was renamed once again, his time to Istanbul. This is still the city's name, and it's the capital of modern day Turkey.

After the invasion, many of the academics, scholars and monks who had called Byzantium home fled to parts of Western Europe. They took with them centuries of learning: art and literature from Ancient Roman and Greek times were again introduced to Western Europe.

This is generally considered to be the date when North and South America were discovered. However, Viking explorers had actually reached parts of Canada 500 years before. And still, Columbus only ever landed on the Carribean island of Hispaniola.

That said, Columbus' discovery came at the right time, and as soon as word reached Europe the race to colonise the 'New World' began.