First atomic bomb was tested by Americans in New Mexico and was successful. Ended WWII.

Americans tested the first Hydrogen (or thermo-nuclear) bomb. Beating the Russians in the creation of what was known as the "Super Bomb"

The ICBM was a result of the policy John Foster Dulles came up with called the "massive retaliation" in response to any major Soviet attack on the US.

This was created so the president could address the entire country in the state of an emergency.

Soviets succeed with first atomic bomb at a sight at Semipalatinsk Test Site in Kazakhstan. Soviets set off a bomb that is said to be the largest bomb the world has seen up to this point in time. With an estimated 58 megatons, the equivalent of more than 50 million tons of TNT, or more than all the explosives used during World War II. This is set off after the US and USSR agree to limit nuclear testing. 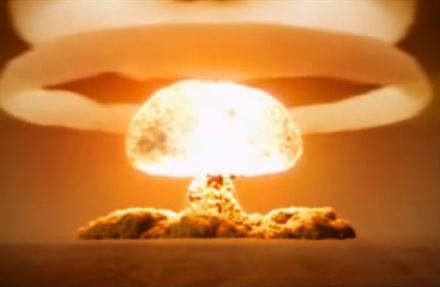 US discovers that the Russians are planning to plot nuclear missiles in communist Cuba.

Russians Shoot Down American U-2

American U-2 Plane accidentally flies into Russian territory and another US plane is shot down in Cuba.

In a speech aired on Radio Moscow, Khrushchev announces the dismantling of Soviet missiles in Cuba and does not insist on his demands concerning the removal of U.S. missiles from Turkey.

Explorer 1, the first American satellite to reach orbit, is launched. It carried scientific equipment that lead to the discovery of the Van Allen radiation belt. First American Men on the Moon

Neil Armstrong and Edwin "Buzz" Aldrin become the first men to walk on the Moon while crew mate Michael Collins orbits around the Moon alone.

Russians launch Sputnik 2 into the space with a dog named Laika aboard. Rocket goes into orbit.

Yuri Gagarin orbits the Earth once and becomes the first man in space.